The U.S. Department of Arts and Culture (USDAC) is an action network of artists and activists, launched on both local and national levels in October 2013. Through the power of arts and culture and a cohort of volunteer Cultural Agents that leads USDAC social change at a local level, USDAC hopes to cultivate the imagination needed to “build a more just and vibrant world”. In Tucson, Southwest Folklife Alliance’s Executive Director Dr. Maribel Alvarez and TPAC Executive Director Roberto Bedoya are members of the USDAC Cabinet along with 27 other national arts leaders. Tucson Arts Brigade founder Michael B Schwartz was part of USDAC’s founding cohort of 2014 cultural agents.

Directing the citizen-led, policy-oriented leadership group of cultural organizers is Arlene Goldbard, who serves as the “Chief Policy Wonk,” and presides over the USDAC’s National Cabinet. Arlene responded to BorderLore’s questions about cultural citizenship and quality of life:

Culture as Component of Citizenship

“Cultural citizenship” doesn’t require legal status or passports. Instead, it describes an aspiration. In a society founded on full cultural citizenship, we all feel welcome. It is recognized that culture is the sum total of all our contributions, and every community’s roles are acknowledged and valued. In a condition of true cultural citizenship, people want to know each other and build community together. Instead of living in a state of contingency, where some have power and the rest are the objects of that power, the right to culture enshrined in the U.N. Universal Declaration of Human Rights is embodied throughout public and private sectors.

How do we know these things? Lived experience is a powerful research tool. Pose this question to a roomful of people: who feels at home, who feels a deep sense of belonging, participation, and equality in this society? In my experience, very few hands will be raised. We have a great deal of work to do to bring about full cultural citizenship.

The U.S. Department of Arts and Culture is promoting a “Cultural Impact Study”—analogous to an Environmental Impact Study — before interventions affecting a community’s cultural fabric are approved. Common examples would be tearing down a longstanding neighborhood to make way for a new freeway or sports stadium, as has happened in so many cities.

Since the passage of the National Environmental Policy Act of 1969, federal projects require an environmental assessment — and if that shows possible negative impact, an Environmental Impact Study — to be prepared and considered before approval, modification, or rejection of the proposed project. This is one of the most powerful and influential tools of environmental policy because it forces us to consider the impact of our actions before we take steps that might do damage.

Right now, for example, if a local authority is asked to approve the destruction of homes, parks, and businesses in a long-lived neighborhood, NEPA mandates research into environmental harm such as possible destruction of endangered species habitat or potential pollution. If negative impact is found, the project can be disallowed or steps to mitigate the impact can be required before anything can be approved.

But what about the impact on cultural fabric? What about the sense of belonging, the sites of public memory, the gathering-places, the expressions and embodiments of heritage cultures that would also be destroyed? Every community should be authorized to assess, study, and act on these too. Requiring a CIS is good example of how to make the intangible concrete. 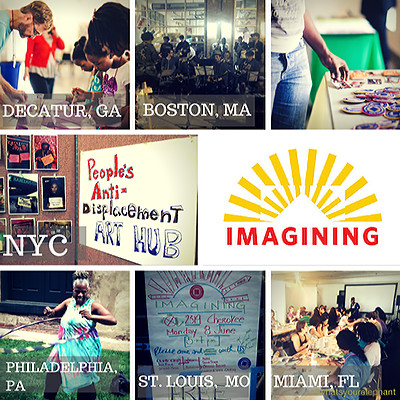 The USDAC isn’t a government agency, but a national action network of artists and cultural workers mobilizing creativity for social justice. In fact, we like to say we’re not an outside agency coming in, but your inside agency coming out.

All of these actions serve a powerful public purpose by engaging people of all ages, backgrounds, locations, and identities in asserting the right to social imagination and taking steps to make their dreams into reality. Together, the visions and actions they surface inform the work of the USDAC in putting forward concise, accessible, and powerful ideas for policies and initiatives that help make cultural citizenship and cultural democracy lived realities.