A Woman of Waila: Gertie Lopez Plays Music to Remember

Gertie Lopez’s hands are delicate and thin, but her strong, nimble fingers can easily coax sounds from the button accordion, an instrument she taught herself to play when she was just ten years old. 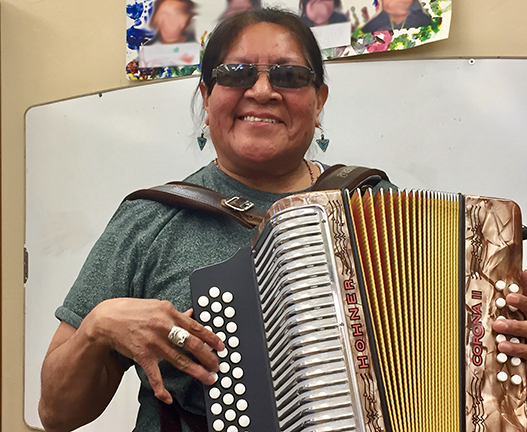 Her father, a musician who played violin, saxophone, and guitar, bought an accordion at a bar—where he was playing a gig—for fifty dollars. He brought it home and Gertie “picked it up and started messing with it,” she says.

Though just a young girl, Gertie was no stranger to music.

Growing up in Chuichu Village, just 10 miles south of Casa Grande, Arizona in the Sif-oidak District of the Tohono O’odham Nation, Gertie and her eight siblings would regularly watch their father play in a mariachi band.

She and her brothers all learned to play Mexican guitars: vihuela, guitarron, and guitar. One of her sisters learned to play the drums. Her brother Steve also learned the accordion but plays differently than her, she says. “Everyone has their own style. My brother has a Mexican style. I play the very basics. I’m not fancy.”

Maybe not fancy, but now, many decades later, certainly skilled and solid. Gertie is the only the female band leader on the Tohono O’odham Nation and she’s keeping a traditional sound alive through her band, Gertie and the T.O. Boyz.

In addition to the mariachi band, Gertie’s father also had a band that played waila music, a traditional form of O’odham music. The name “waila” comes from the Spanish baile, or dance. It is sometimes called “chicken scratch.”

“The story I heard from an elder was people were dancing and a bunch of dust started coming up like it does and so they called it ‘chicken scratch.’ You know, because chickens kick up dust, too. And so the name stayed that way in English,” Gertie says.

Waila originates from acoustic fiddle tunes, and evolved to include Mexican and European styles like polka, mazurka, and chote. It draws heavily from norteño music from northern and Southern Mexico, an adaptation of the polka brought by European immigrants to the borderlands. In the mid-20th century, waila incorporated brass instruments associated with military-style marching bands.

“A long time ago our people went to boarding schools and they learned how to play saxophones there. A lot of our Tohono O’odham were also self-taught saxophone players,” Gertie says.

Gertie is often surprised by the way sounds seem to connect cultures. One time she was watching a black and white show on television and a man was singing ‘Cheek to cheek.’ “It was real slow, but I recognized it.”

When she started humming the song faster and added a rhythm she realized, “That’s a waila song! Same tune. It was crazy. I guess the O’odham had good ears!”

Music as a balm

By the time she was in seventh grade, Gertie was playing drums for her dad’s waila group. Gertie’s family also had their own band called The Lopez Bros. & Gertie until one of her brothers, a saxophone player, died from drowning.

“We stopped playing. He led the band,” she says.

Gertie eventually began to play with other bands, expanding her skills and meeting new people. Some 17 years ago, she recorded her first CD with a rock band called A:cim, which means “Us” in O’odham.

In 2003 she formed Gertie and the T.O.Boyz, a four-person band specializing in old time waila sounds, with Gertie on vocals and accordion, and three other musicians on bass, guitar, and drums.

Later Gertie added a saxophone and violin. Although there are old time fiddle bands on the Tohono O’odham Nation, “We’re the only waila band that travels with a violin,” she says. “That’s straight from my dad, that influence.”

But, she confesses, rotating musicians comprise her “Boyz.” “A lot of people know and don’t know this, but I don’t have the same guys every time. Everyone plays with everyone. It always works out,” she says.

Gertie plays both traditional songs and originals. One of her favorites is “Sheila’s Rasta,” a slow song with a reggae beat that she wrote thirteen years ago—and later sang as a tribute—for a friend who committed suicide.

“I just picked up my guitar and the lyrics came to me. I never put it down on paper. She loved reggae music. I sang it at her funeral. It was one of those songs that just flew out of me. That song is 13 years old, but people still ask me to sing it.”

Music is a way for her to commemorate those who’ve passed. “These people once played the music, so let’s continue whatever contribution they made,” she said.

When recording a second album with Gertie and the T.O. Boyz, another band member died right before the CD was released. “I’ve lost a lot of people,” she says. “There’s a lot of heartbreak in a music career.”

In addition to dear friends, Gertie has lost two other brothers, one to suicide, and one to complications from surgery, plus her father.

“My dad he taught me everything. I didn’t stop playing for long after he died. It makes me feel happy that I’m still doing it. He was my everything.”

For Gertie, music serves as a balm for sorrow. “It’s just healing for me. I’d be worse if I didn’t play. The music is uplifting,” she says.

Gertie also has her own choir group with her mom called Ida Lopez Group. She also leads the music group for San Xavier Elder choir, for which she mainly plays guitar and lets someone else play the accordion, she says.

The choir sings in O’odham, Spanish, and English and has become an important priority for Gertie, despite her busy schedule, “I don’t say no to church. I’ve take so much time off to play for funerals and wakes. We’ve had so much loss.” 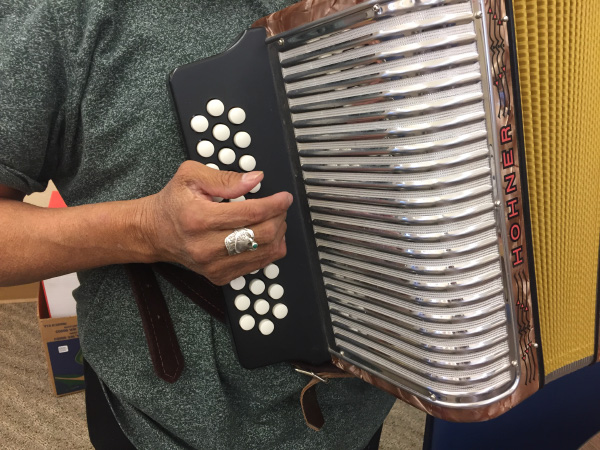 Again and again, Gertie finds solace in the music. “Music is my prayer. I catch myself up there praying, praying. I pray a lot for the children.”

By day, Gertie’s works at the San Xavier Education Center as the library resource coordinator. She helps everyone from infants and toddlers to Head Start students to youth in afterschool programs to elders.

Gertie is also working to share the tradition of waila music with youth. She has taught classes at Baboquivari High School in Topawa, Arizona on the Tohono O’odham Nation. “I took my T.O. Boyz out there, and we taught a whole group of kids then the kids got up and played in a concert style it was great. They were already so talented,” she says.

Now seven albums under her belt, Gertie plays regularly on the Tohono O’odham Nation during rodeo and travels often to Gila River and Salt River. She has also played in Tuba City, San Carlos, the AkChin Indian Community, and on the Navajo Nation, and has traveled to Minnesota and California for gigs. She’s a regular at the annual Tucson Meet Yourself folklife festival.

One of her career highlights, she says, was in 2010 when she was nominated for a Native American Music Award. Gertie traveled to New York for the ceremony. “I actually got to sing a song I wrote there at the VIP party. That was pretty cool!”

Gertie still plays music with passion and delight, despite aging and despite the rheumatoid arthritis settling into her hands. She saw the disease in her paternal grandmother, she says, “So I know all the stages.”

She doesn’t let it faze her. “We have strong genes. I’m going to play as much as I can.”

Gertie Lopez plays a cumbia on the button accordion.

1 thought on “A Woman of Waila: Gertie Lopez Plays Music to Remember”