Passing the Summer Solstice just several days ago, we contemplate humanity’s common recognition of the longest day of the year, in a season that holds great meaning in the desert. Perhaps most aware of the season’s significance is the Tohono O’odham Nation, which straddles the borders of the United States and Mexico, across 4,600 square miles in a storied swath of the Sonora desert. The O’odham people balance contemporary issues with traditions and folklife preserved and passed down from Elders. 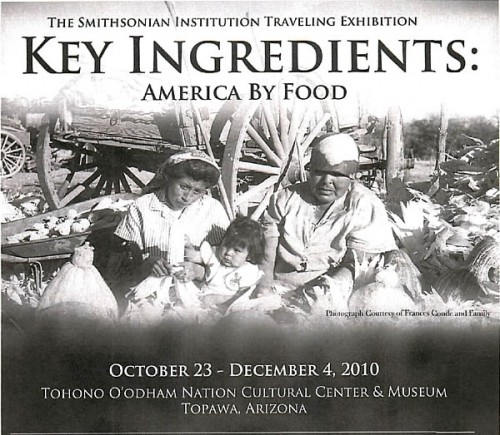 Stories of agricultural tradition and native plants were highlighted in 2010, when the Smithsonian’s Key Ingredients: America by Food traveling exhibition about America’s food culture — from its history and traditions to its innovation, visited Arizona and, in particular, the O’odham Nation. From October 23 through Dec 4 2010, the Tohono O’odham Nation honored their food traditions with I:da Jeweḍ O Wuḍ T-Ki: This Land is Our Home, a companion exhibit presented at the Himdag Ki: — Tohono O’odham Nation Cultural Center and Museum in Topawa, Arizona.

The following details are culled from the notes shared by Jennifer Juan, Museum Specialist at Tohono O’odham Nation Cultural Center & Museum, and panels of that I:da Jeweḍ O Wuḍ T-Ki: companion exhibit. The notes mirror what unites the community in the seasons, in enduring rarities of tradition that continue to be cherished:

• “I’itoi gave us the desert and said it would provide us all our needs. This is especially true of our plants. The plants surrounding our communities have many nutritional benefits. The Elders believe the foods our people used to eat every day helped keep us strong and healthy. An understanding of seasonal plants was passed from generation to generation…”

• Throughout this month, Ha:ṣan Ba:k Maṣad, families would trek to their bahidaj camps, before going to their summer homes to prepare for planting and the flood water farming. Rising with the sun, the families spent hours “knocking down the bahidaj and peeling away the skin to reveal the delicate and sweet fruit (that) could be boiled into a syrup or dried for later use…”

• Soon after the rains the i:bhai become ripe. They are cleaned with şegai…Edible right off the cactus, the taste, says the O’odham panels, varies from beets, grapes, honeydew and even figs. “Seeds are discarded, but once cleaned the pulp can be made into a juice or syrup…Throughout the summer the wihog begins to ripen. When shaken off the limbs of the kui, the wihog can be soft and sweet. The dried pod is ground into flour which can be used in cooking.”

• After the harvest, for the Rain Ceremony, the communities would prepare fermenting syrup to make nawait, as part of “calling the rain.”

• During the monsoon wild edible greens grow in areas where rain water collects and slowly sinks in the ground. I:wagi can be found in abundance at the edge of the roadside, wild spinach that may be sautéed with onions, boiled or eaten raw.

• Many families within our communities were ak-chin farmers during the summer monsoon months. They guided floodwater from the mouths of arroyos to their fields using a blend of traditional methods (such as brush damming to redirect water) and new methods like concrete canals and floodgates.

References:
• O’odham (O’odham ñiok), from Omniglot encyclopedia of writing systems and languages http://www.omniglot.com/writing/oodham.htm
• Two books by local authors offer contemplative essays as they open spaces for readers to better understand traditional expressions of culture that demonstrate how we live in a big and small world. The following two books show how O’odham people through many generations have used their beliefs, inventiveness and creativity to preserve as well as expand possibilities. (As used in these texts, the word “Papago” was used by the Spaniards to refer to the O’odham people; for decades it was the dominant word in common usage, until 1986, when the Nation adopted The Great Seal and a new constitution, changing its name from the Papago Tribe to the Tohono O’odham Nation.)

From Dr. Gary Nabhan, agricultural and ethnobotanist, words that encourage the thoughtful, respectful, and sustainable:

“….The rains came that night – they changed the world. Crusty dry since April, the desert floor softened under the rain’s dance. Near the rain-pocked surface, hundreds of thousands of wild sprouts of bloodroot amaranth are popping off their seedcoats and diving toward light. Barren places will soon be shrouded in a veil of green….”

“…Most outsiders are struck by the apparent absence of rain in deserts, feeling that such places lack something vital. Papago, on the other hand, are intrigued by the unpredictability rather than the paucity of rainfall – theirs is a dynamic, lively world, responsive to stormy forces that may come at any time…..”

From Dr. Bernard Bunny Fontana, anthropologist and historian, a place-making book of introduction to the Tohono O’odham reservation, acknowledging an intricate, spiritual relationship to the land where expressive human creative force is reflected and evident in the community and its people:

“Elder Brother created people out of clay and gave them the ‘crimson evening.’ Elder Brother told the O’odham to remain where they were in the land that is the center of all things. And there the desert people have always lived. They are living there this very day. And from his home among the towering cliffs and crags of Baboquivari, the lonely, cloud-veiled peak, Elder Brother, I’itoi, spirit of goodness, who must dwell in the center of all things, watches over them.”

Additional Resources:
• Check out any of Dr. Ofelia Zepeda’s books of grammar and poetry for wonderful meditations on water, foodways, and O’odham memory from an insider’s point of view. http://dingo.sbs.arizona.edu/linguistics/OfeliaZepeda/
A Papago Grammar (1983)
Ocean Power: Poems from the Desert (1995)
Jewed ‘i-Hoi / Riding the Earth (2009)
• To visit the Tohono O’odham Nation Museum and Cultural Center: http://www.tonation-nsn.gov/cultural_center_museum.aspx