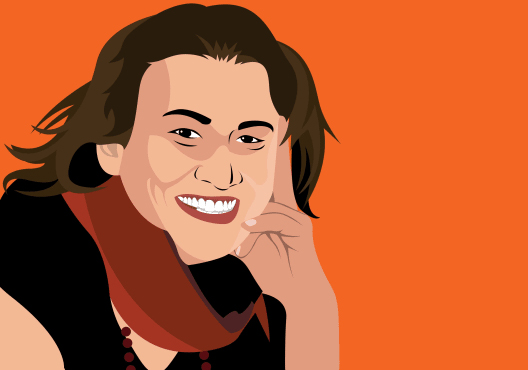 Traditionally, to glean is to gather grain or other crops left after a harvest. It is also to gather information or material, little by little.

I’m not sure gleaning is officially part of the folklorist’s toolbox, but perhaps it should be. Gleaning has taught me so much about culture and community.

Some 25 years ago, I noticed a preponderance of citrus fruits, pomegranates, even figs on the ground in Tucson. Just lying there, fallen from trees, forgotten and unused. It irked me. The trees were being watered and their fruits were being wasted. I began gleaning the fruit, and eventually, I started a fruit mapping project with youth to create awareness of food going to waste in backyards. I recruited Somali Bantu refugee youth, and the project got them involved in community activities and helped save the citrus fruits from being wasted.

From that experience, I formed the Iskashitaa Refugee Network, an intergenerational network of Tucson volunteers and UN refugees from Africa, Asia, and the Middle East, who locate, harvest, and re-distribute locally grown fruits and vegetables that would otherwise go to waste.

Iskashitaa is a Somali word for “working cooperatively together.” Through gleaning, we work together to create a sense of belonging, strengthen the local food system, reduce wasted food, and increase food security. We now have worked with refugees from over 30 cultures, each of which brings its own fruit palate, adaptation practices, and food preservation techniques.

Here are some of the lessons I’ve learned from gleaning:

Gleaning is a form of paying attention and listening. We glean over 90 different items not only from backyards but also from both public and commercial properties in Tucson and Southern Arizona, including white, pink, and red grapefruits; figs; jujubes; loquats; sweet potato, broccoli, and pumpkin greens; dates, and low desert apples, plums, and peaches. In doing so, we also gather stories, experiences, and new understandings of home. We glean a better sense of what it means to live in community.

Gleaning fosters generosity. The work is an opportunity for refugees to give back to the people of Tucson while also providing for their families. We can harvest up to 1000 to 6000 pounds of produce a week, so we often have surplus produce to share. We also teach the public how to produce products such as date syrup and vinegar, cactus pickled garlic, sundry citrus marmalades, and even barrel cactus fruit chutney. It is in the gathering and sharing where most the learning happens.

Gleaning reveals what really counts. Recently, at the International Gleaner’s Symposium, I was reminded that gleaners like to count: How many pounds of produce were collected? How many servings did it yield? How many orchards were rehabilitated? All of that is important to track, but it’s never the whole story. Being a part of IRN is often life changing for refugees and also for interns and volunteers.

At IRN, while we track poundage, servings, and families served. We measure our impact more through experience, growth, and narrative. Because how do you quantify “home”?

Once, during funeral rituals for a Bhutanese family member, someone spotted amaranth growing and immediately started gleaning. Amaranth, almost always considered by farmers to be a weed, but can be cultivated or easily gleaned and sautéed, boiled, cooked with peanuts, or curried. Soon many people were collecting the amaranth and forgot momentarily their purpose at the river’s edge: the funeral procession. Later, at a special dinner, one Bhutanese refugee from Nepal said, “Thanks to Iskashitaa, I had a taste of home today.”

Traditions are adaptable. Through gleaning, we build cultural bridges, connecting newcomers to what is already here and introducing longtime residents to new neighbors and new traditions. It’s great that America has fallen in love with kale and chard in the last few years but at IRN, we’ve learned from African, Asian, and Middle Eastern cultures and culinary traditions that there are nutritious alternatives. Ever try pumpkin shoots? How about fig leaves? Or Texas olives, green bean leaves, or carrot tops? Refugees in the network share recipes using edible weeds such as purslane (verdolagas), lamb’s quarters, mustards, and amaranth. These foods have a culinary history in Mexican and Mexican-American communities and are now being discovered by new immigrants to the region.

We have also learned from our global friends about “hunger foods,” which are often unrecognized as foods or simply not commonly eaten. Such foods may offer a partial adaptation for the future with a hotter climate.

Language barriers can be porous. Our harvests and events can feel like traveling with a mini United Nations. When language barriers arise during gleaning sessions, we find new ways to communicate using pantomime and role-play. Laughter, we’ve found, is a sound made by people from all countries.

Sometimes harvesters share common languages but not common cultures. When that happens we focus on our common interests in food and sustainability or our common disposition towards kindness and friendship.

My favorite moments often come after the harvest, sitting on the floor of an ornately decorated apartment sipping strong tea. I feel like I’ve flown in on a magic carpet and landed in another culture where people are friendly and are safe and happy to be living in a new peace.

Food connects us to place and to each other. Refugees come with profound funds of knowledge, a thirst for education. Their hearts long for a friendly smile, or a token of friendship, as they desire integration and belonging. All the while, their souls ache from the immense losses and horrors they’ve experienced or witnessed. Many continue to endure difficulty from afar when their loved ones are still in the shadow of danger.

At Iskashitaa we encourage one firm foothold in the “old world” and one in the new. We work to unravel the social isolation experienced by many refugees one fruit tree at a time. After some time, refugees at IRN know what grows here. We become “fruit spies,” looking for food in trees in a city where so much is wasted. When you come from a place of war and genocide or a refugee camp, wasting food is unfathomable.

These 15 years of gleaning have helped me to understand that harvesting is healing, and that food is medicine, religion, and language. Food is also celebration, used to signify the stages of life. Food is comfort. Food is a common denominator, one that allows us to form new communities in new places and uphold traditions that connect us to home.

Barbara Eiswerth is the director of Iskashitaa Refugee Network. A resident of Tucson since 1992, she holds a Ph.D. from the Office of Arid Lands at the University of Arizona.

1 thought on “Gleaning for Understanding”