The Performing Art of Nichibu

The intricate strands of classical Japanese dance may be honored separately, but Master Teacher Mari “Suzuyuki” Kaneta braids them all into her work, bringing to both dancers and audience a peak cultural experience. Through her lyrical body movements, costuming and characterizations, Suzuyuki is in command of an expressive style that showcases Japanese tradition. Strikingly dramatic, her programs display emotion, dance and complex, symbolic narratives.

Trained with the Classical Japanese Dance School in Los Angeles and in Tokyo, Mari Kaneta received her degree and dancing name Suzuyuki (寿々由紀) in 1973. She established the first Japanese Dance class in Tucson in 1984, and now teaches traditional Japanese Dance (日本舞踊寿々由紀会) at her SUZUYUKI-KAI studio.

Suzuyuki has selected Suzu Igarashi, born in Tokyo, as apprentice and also as the dancer to take over the role of Sensei (teacher) in five years.

Suzuyuki aspires for all to glimpse what lies beneath the complexities of traditional Japanese dance. In Sensei Suzuyuki ‘s words:

Kabuki style dancing is probably the most iconic Japanese dance form known to the western world. However, Japan’s dance heritage is rich and diverse. The style we perform can be called “Nichibu,” “Buyo” or “Nihon Buyo,” all of which translates as Japanese dance.

The Art of the Practice

Practice and performance are almost two separate routines in their own rights. Practice begins with getting into the practice kimono and bowing with the fan to the Sensei. Dances are learned by oral instruction and following the Sensei’s movements. Practice ends with a bow to Sensei, to show appreciation for the lesson.

Performing is almost ritualistic in nature while doing makeup and hair — each has a specific order/method to follow depending on the piece being performed. Dressing in performance kimono is a bonding time between the dancer and the person dressing them (usually Sensei, senior dancers, or professional dresser.) Once fully dressed, it is expected that dancers are gracious, beautiful and well-behaved, as each one of them represents the group.

As far as I can remember, my life has always revolved around Japanese dancing. As soon as I was able to walk, I was enjoying following the dancers in the summer festival dance circle called Obon dancing. My love of dancing came from my mother who loved the art but was unable to do so due to her physical handicap suffered from childhood polio. Her dream was to be a dancer but since she was unable to do so, she placed her dream in me. My mother’s dream continued to grow inside of me, which helped me to thrive for my dancing degree achieved in 1973. I have always considered my mother as my other Sensei in regards to dancing; at times, she was stricter than my Sensei. If it was not for my mother encouraging me to continue dancing, maybe the Suzuyuki-Kai (would) not exist today in Tucson.

Sensei means teacher, but, in Japan, the people (who) “teach us” have a broader appreciation than in the US. Doctors are also referred to as Sensei in Japan. It is a role that is expected to teach, mentor and guide a student for a lifetime. The training needed to become a Sensei is long and arduous.

I have learned to appreciate my cultural background, through the teachings of my mentor, who has taught me to respect – The respect for dancing, the respect for who I am, and to respect the people and community I am involved with. I would like to continue to teach (others) what I have learned, in hopes to enrich their lives and awareness of who they are in this diversified community.

Japanese dancing was always a part of my life since the first day I can remember. I appreciated my dancing skills when I moved to Tucson, where I didn’t have any friend or knew anyone. My knowledge of dancing helped me to meet and build circle of people around me and enriched my life with new findings in community, which was so different from the one I grew up with. In happiness or in sadness, dancing was always with me, helping me to overcome different situations I faced.

My love for Odori will not be correctly conveyed without mentioning the support from my family, friends and students, especially from the biggest fan of my dancing — my 2 sons (4 1/2 years apart in age.) I was teaching until 2weeks before each of my sons were born, and 1 month after they were born, I was back at teaching. My sons were always with me at the practice and being cared by many adopted moms and aunties while I taught. With all the love and support from them I was and am able to continue the Suzuyuki-Kai.

Tradition and the mentoring process, in the words of Apprentice Suzu Igarashi:

I have been mentored by Ms. Mari Kaneta for 7 years in the group that she established 35 years ago in Tucson. It is a great responsibility to be an apprentice for Ms. Kaneta’s group. I feel that performance is just a one part of this traditional art. The etiquette and manners are a very important part of this art. All of the students are constantly reminded to behave respectfully as a representative of our culture. I hope we can pass the virtue of our tradition to the next generations. We regularly perform at a few events including Matsuri Japanese Festival in Phoenix and Tucson Meet Yourself. Also we hold a formal recital every 4 years. We are excited about the next recital which will be held in April 2016. The group gets together weekly for practice. Also, since we prepare traditional costumes and props that are required for our performance, I’ve been learning how to hand-craft them from Ms. Kaneta, as well.” 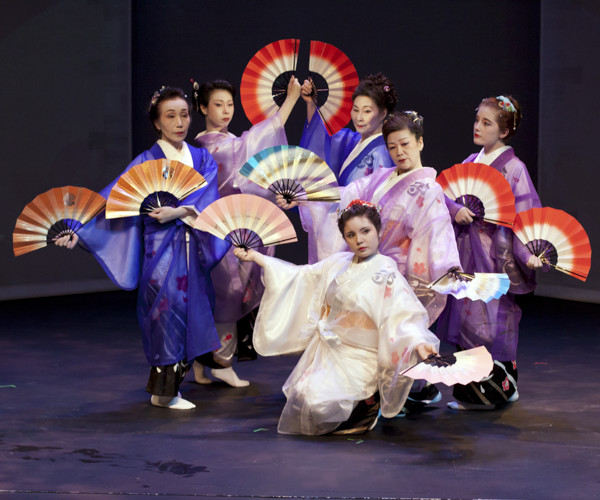 Again, in Sensei Suzuyuki’s words:
This type of art forms seems to be becoming endangered and extinct around in the United States. Pockets of committed people struggle to retain and teach this knowledge to the next generation and it can be a challenge. Fortunately, Suzuyuki-Kai has a strong Master-Apprentice relationship and a multi-generational student base that will pave the way for this art form to continue to thrive.

Suzuyuki-Kai will be hosting a formal recital in April 2016 to celebrate the 30th year anniversary since the establishment of the group in Tucson, and also to celebrate 40 years of teaching Japanese dancing. At the recital Suzu will be formally introduce as my apprentice, who will be leading the group in year 2020, when I will step back as the head Sensei. I will remain active as a choreographer for the group and continue to assist Suzu in preserving our heritage.

It is with my deepest appreciation and great honor to receive this award. This acknowledgement encourages me to continue to thrive toward retaining this great art form, and to pass along to the next generation the better understanding of their background through dancing.