Every Sunday morning the sound of church bells calls Eastern Orthodox believers in Tucson together for a worship service dating back 1500 years: the Divine Liturgy of St. John Chrysostom. Named after a well-known saint in Orthodox Christianity, the Divine Liturgy is almost entirely sung in call and response, a chant that bounces between clergy and the choir and congregation. The sounds rise into a the copper-domed architecture of the East 5th Street building, blending with the scent of burning incense and beeswax candles, the shine of icons made with traditional egg paint and gold leaf, and the ornate textiles found in the vestments of the priests, deacons, and altar servers.

For Orthodox Christian communities, worship and fellowship coalesce through sounds: chanters singing Psalms in a Byzantine style, choristers singing 300-year old hymns to specific saints, and young voices chanting during Communion. Some songs are recent creations, while others come from ancient choral traditions around the world.

While the overall structure is consistent, the sound of each service varies because of Byzantine tradition of singing in eight different tones. The tones are used at different times of the services and calendar year and are supplemented by the use of fundamental notes called isons. One chanter may sing the melody of the hymn, while another focuses primarily on sustaining the pitch of the ison. (Listen to an example of an ison here.)

This ancient example of tradition and variation is a recent addition to Tucson’s East Side. The current Holy Resurrection Orthodox Church was dedicated in 2011, over 40 years after the community’s initial founding in 1969. A multicultural community, the parish is part of a branch of Eastern Orthodox called the Antiochian Orthodox, which has its origins in what is now present-day Syria and Lebanon. However, like Tucson, the parish is very diverse; the congregation is home to populations of Lebanese, Syrians, Egyptians, Ethiopians, Greeks, Russians and Latin Americans, among other groups.

For many years, the choir has shared sacred music at the annual Tucson Meet Yourself folklife festival, offering Byzantine, Russian, and Georgian pieces, as well as music from Orthodox composers in North America. 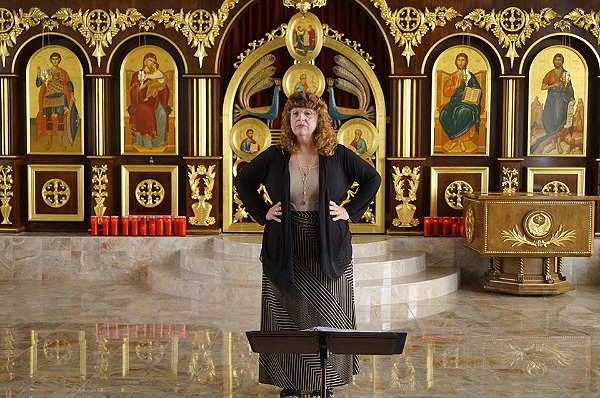 Music is often the first thing that connects people to Orthodox culture. Director Mareena Boosamra-Ball joined the HROC choir in 1968 when her family moved from Ottawa, Ontario to Tucson. Then ten years old, she served as a soprano singer until the age of 17, when she was, in her own words, “elected ‘Army style’ to be the new choir director.”  Mareena considers it a duty to share Orthodox life with others through her music. “When we sing weddings, baptisms, funerals or public concerts, people inevitably come and tell me how moved they were by our music.”

Mareena also plays an important role for Antiochian Orthodox communities nationwide, not only as a leading instructor of Orthodox choral music, but also in her role as Sacred Music Coordinator for the Diocese of Los Angeles and the West. She serves as an instructor for Orthodox sacred music workshops and regularly leads choral activities for Orthodox regional gatherings around the United States

Jennifer Ambrosio, a local elementary school principal and long-term member of the HROC choir, began singing in the choir when she was 12 after the choir director approached her and said, “Okay, you’re ready to come sing, let’s go,” then took her to the choir loft.

“That was it. I spent several weeks just standing with them, learning how to read the music and understand what was going on. After about 3 weeks of that, I was a full member,” Jennifer said.

Jennifer also serves as a chanter, primarily responsible for providing music during services. A chanter is often called a reader, and plays one of the most important roles in the soundscape of the Orthodox community. These singers must learn how to sing in a traditional Byzantine style and be able to perform all eight tones.

Part of maintaining the community tradition of choral singing involves educating the parish youth about how to sing and chant. Children aged 3 to 11 form the children’s choir, and many joining the main choir as they get older. 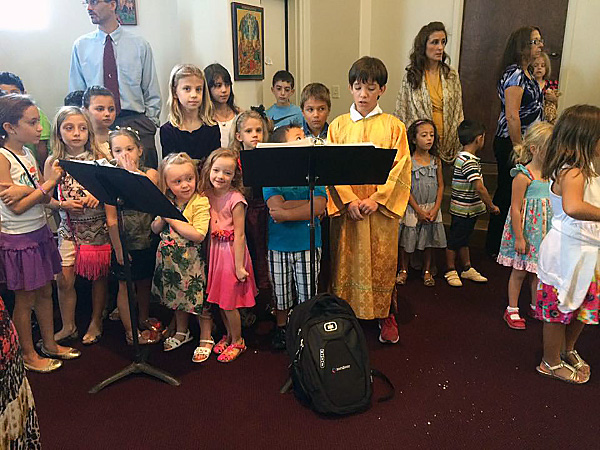 Members of HROC’s children’s choir, singing during Communion in 2015. The author’s daughter, Mari, is just to the right of the left music stand; she’s been learning since she was three, and is continuing to sing and chant in her new home parish.

Megan now teaches 3-7 years olds how to sing Orthodox music and leads them during the Divine Liturgy to Communion. The youth also perform for the community during the annual Christmas program, learning traditional hymns that prepare them to engage with sacred music as they turn older.

Through the efforts of sacred music tradition-bearers like Mareena, Jennifer, and Megan, among others, the HROC choir continues to play an important role in both the religious and cultural landscape of Orthodox communities in Tucson. Through its presence at local concerts, events and folklife festivals, the choir forms an important part of the cultural soundscape of Southern Arizona.

Faith and culture are seen as inseparable to members of Orthodox communities. Music and song help weave together the tradition and share it with the rest of the world.

Nic Hartmann is a folklorist who serves as the Director of Learning and Civic Engagement at the National Czech & Slovak Museum & Library in Cedar Rapids, Iowa. He was a folklorist-in-residence with the Southwest Folklife Alliance from 2014-2016, during which time he and his wife, Jennifer Hartmann were members of the HROC choir. His wife also worked to introduce HROC youth to sacred music. Nic is now an Orthodox chanter, chorister and youth educator in Cedar Rapids.