Sun Sets on a Beloved Benedictine Monastery in Tucson

Story and photographs by Mele Martinez

Sunset is the best time to view the “Pink Rose of the Desert,” the monastery built in midtown Tucson in 1939 to house the Benedictine Sisters of Perpetual Adoration. When the sun reaches the horizon, the building’s facade reflects the orange and purple desert sky. Flanked by tall palm trees, the monastery’s turquoise dome tower reaches three stories high and catches the last light of the day. 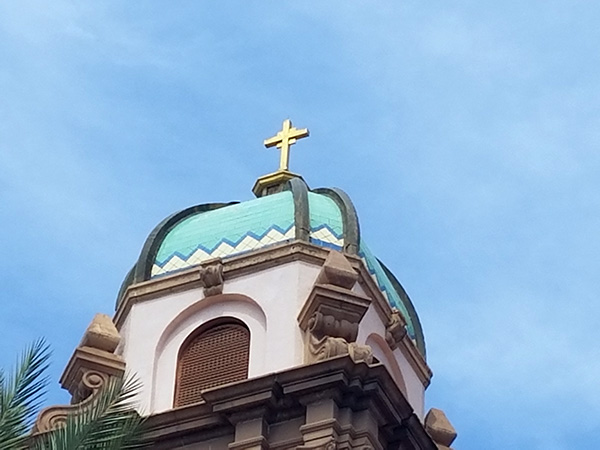 It’s hard to know yet if the sun will set forever on this beautiful building. Due to financial instability and increasing maintenance expenses, the Benedictine Sisters sold the building in October 2017. The buyer, a local developer, plans to build multi-story housing around the property, which would obscure the building and, some argue, forever change its character. Currently neighbors, local architects and developers, and the Tucson City Council are deciding how to appropriately repurpose a space once considered sacred.

While its fate is uncertain, for now the building still stands–an architecturally significant site that once housed a community of quiet, but powerful, women of faith.

Classical Aesthetics in a Desert Context

Tucson’s most prolific 20th century architect, Roy Place designed the monastery (800 N. Country Club Road) in the Spanish Colonial Revival style. Back then, “East” Tucson was relatively undeveloped, and the site was chosen specifically to ward off encroachments from business for many years to come. While the monastery’s living quarters were kept stark and bare, the exterior of the building is layered in Baroque design. Etched figures portray symbols of the lamb, fish, vines, rose, and cross. Against pink stucco walls and clay tile roof, the entire exterior of the monastery becomes luminescent in the setting sun, inspiring its nickname, the Pink Rose of the Desert. 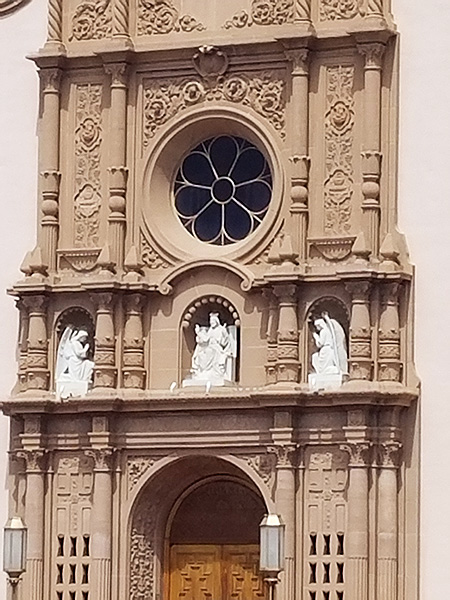 The structure shares architectural features with other Tucson buildings of the same era, including the Veteran’s Hospital and the Pima County Courthouse, both designed by Roy Place. Place’s original plans for the monastery grounds included a chapel, refectory, reception, guest chambers, assembly room, and 40 private rooms for the Sisters.

The Sisters, newcomers to Arizona, hired Place to design their convent and house of worship to reflect Southwest culture with classical aesthetics, to exhibit a worldview that valued the region’s history.

This “looking to the past” was part of an architectural movement to revive classical designs, says Tucson architect Corky Poster. Roy Place was one of the last of these style-based architects in Tucson before the rise of modernism, Poster says. 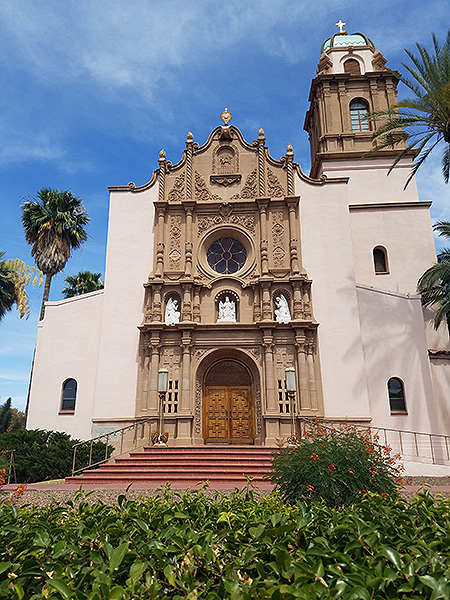 A nod to the region’s legacy of missions, the Sisters repurposed mesquite wood confessionals from the 1868 Tucson Cathedral. They also chose to encrypt into the cornerstone of the building a copper box—an additional celebration of local materials. According to the Tucson Historic Preservation Foundation, the box–cemented into a special place in the wall of the chapel–contains records handwritten by the nuns listing the names of civil authorities, Eucharistic Guards, Sentinels, and benefactors. Also in the box is a collection of coins and stamps.

A quiet sanctuary and a devoted order

A groundbreaking even was held—at sunset—on November 8, 1939. According to the Arizona Daily Star, Tucson Bishop Daniel J. Gercke addressed dozens of laity and special guests, saying the Pink Rose of the Desert would inspire “generation after generation” to appreciate the power of prayer. 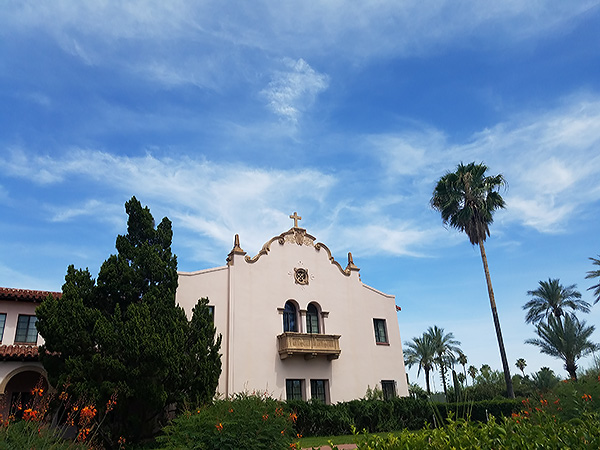 Though the convent was not regularly open to the public, visitors were invited into the quiet chapel sanctuary. Over the past eighty years, thousands of congregants flocked to that space for a calm retreat from the bustling world, illustrating that prayer and places of peacefulness “are desperately needed,” as Sister Joan Ridley from the order suggested in a recent Tucson Weekly interview.

The order of Benedictine Sisters of Perpetual Adoration was founded in the 19th century, but its affiliated origins are ancient, tracing back to 5th century and the Order of Saint Benedict. The Sisters’ purpose is to live a simple life with a focus on prayer, work, community, and obedience to Christ.

Though some might imagine the life of a nun as quiet and uneventful, the Sisters’ work was diverse. For many years, throughout the monastery’s patios and gardens, they harvested avocados, peanuts, oranges, grapefruits, onions, carrots, spinach, grapes, honey, and dates. Financially autonomous from the Roman Catholic Diocese of Tucson, they sold their farmed foods, sewed vestments, and prepared communion wafers for income. Within the monastery, the Sisters practiced law and medicine, studied theology and philosophy, wrote books, painted works of art, cooked meals, made music, popped gourmet popcorn, fixed broken machinery, played volleyball, and occasionally watched television. By most standards, they were resourceful, forward thinking, talented, and faithful.

The Sisters also carried out the important duty of worshipping the Holy Eucharist in the monastery’s sanctuary. When they first arrived in Tucson in the 1930s, they joined two other orders in town dedicated to this adoration. Early reports in the Arizona Daily Star claimed this made Tucson distinct–“The City of the Holy Eucharist,” some called it. Hundreds of Tucson devotees in the early 20th century prayed and participated in a sacrament called the “Invention of Divine Love,” acknowledging God’s love for humanity and responding in love through perpetual worship and prayer.

But those devotees waned over time, and even the community that once prayerfully guarded the presence of the Eucharist in the Chapel is largely absent today. Given the size of the grounds, securing the space became a challenge. In 2005, several break-ins robbed the order of donation boxes and carved statues, and at times the Sisters worried about intruders lurking in the halls. There was simply not enough personnel or funds to keep such a large property operating safely. 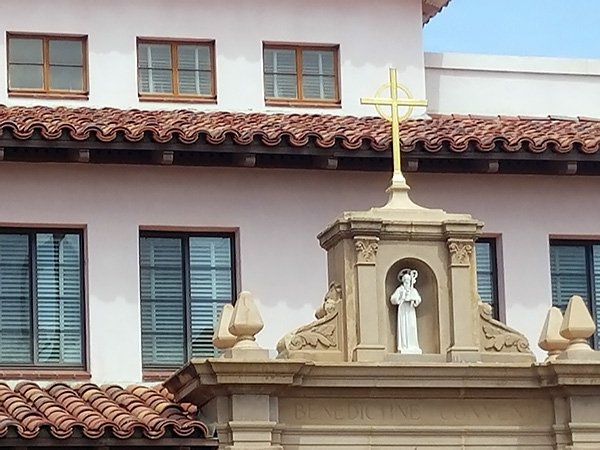 The last several decades have seen a steep decline in participation for both monastic communities and congregational rites and rituals of the Catholic Church. Tucson has grown by nearly 500,000 people since the Benedictine Sisters arrived, but membership to their order and others has decreased. According to the Center for Applied Research in the Apostolate, religious sisterhood in the US has dropped 72 percent in the last fifty years. In 2017, only 16 Sisters, all elderly, were left at the Pink Rose of the Desert.

Over the past 80 years, the monastery’s immediate surroundings have become the Miramonte neighborhood, a city block with over 2,300 homes and a business district of grocery stores, bookshops, movie theaters, and multiplex apartment buildings. Amidst this activity, the sisters lived under Benedictine oath in such silence that many Tucsonans, including some Catholics, had no idea the group existed.

That is, until news broke of the monastery’s closing and sale.

After the sale, the Catholic relics within the sanctuary were removed, the holy places de-sanctified, and in a quiet and prayerful withdrawal, the Sisters said goodbye to the community. 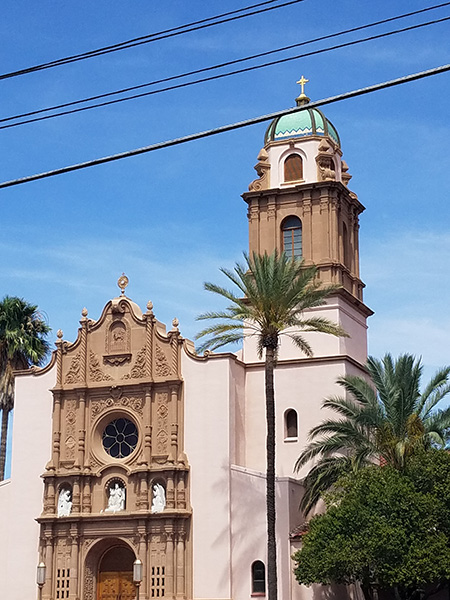 The new plans for the building and its surroundings are not without controversy. Neighboring residents are concerned about the height of new structures and changes to the vegetation bordering the property. Others are excited about new development that adds housing for Tucson’s growing population, particularly for University of Arizona students, while historical preservationists are afraid of losing an architecturally significant building to development.

In a recent op-ed in the Arizona Daily Star, Corky Poster wrote, “Historic buildings are part of a living city, not fragile museum pieces. They need to find compatible and contemporary economically sustainable uses.”

But while some preservationists hope to preserve the historic building itself, others believe the building should be used for its original intention–“to open our awareness to the reality of God’s presence and love,” said Sister Joan Ridley in a recent Tucson Weekly interview. For the latter, seeing the building house cafés or apartments might serve as a painful reminder that prayer and quiet contemplation are no longer valued. In that light, such a building for them would only be an elaborate facade. 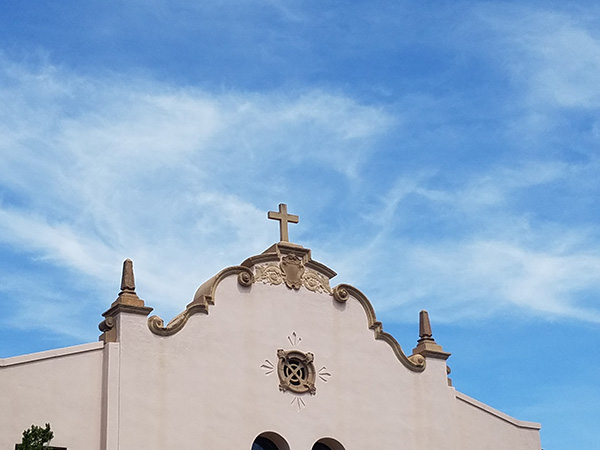 Each evening, followers of the Benedictine tradition throughout the world practice a sacred prayer service called “vespers.” Part of the Liturgy of the Hours, it is a service devoted to reflection and acknowledging the passing of time and is ritually sung and spoken at sunset. While the Sisters of Perpetual Adoration will no longer sing vespers from their Pink Rose of the Desert, as long as the monastery reflects the magenta light of sunset, it invites us to think and rethink what we might cherish next.

Mele Martinez is a writer and Flamenco dancer in Tucson.

Poster, Corky. “We Can Save the Monastery and Build Apartments at the Same Time.” Arizona Daily Star, 3 June 2018.