Anthony Belvado is a violin maker from the San Carlos Apache Tribe. Traditional Apache violins are made by hand from a hollowed agave stalk and embody respect for plants and community. Their song is said to be a way of summoning true love, and the tradition—which dates back to the 1800s—is passed along male lineage. Belvado learned the craft from his late grandfather, Salton Reede, Sr. In 2018, Belvado was awarded an SFA Master-Apprentice Artist Award to support him in passing along the form to his grandson, Jerimiah Wilson. BorderLore editor Kimi Eisele visited Belvado near San Carlos, Arizona and spoke with him about his artistry.

Do you want to tell me a little bit about your childhood and how you began making violins?

I was raised by my grandparents and they taught me the value of respect through the traditional way. My grandmother would talk to us in wintertime—it’s always done in winter—setting us aside after dinner and talking about different ways of how you should conduct yourself on this Mother Earth. One of those ways was respect. You respect yourself as a whole for being present on this earth. You don’t take everything for granted. Everything you show respect. The plants you would use, you show respect prior to harvesting it. Then later on it will repay you in its own way. I’ve always cherished and done what she told me to do, to this day.

From there, we got caught up into the welfare system and were taken away from my grandparents and put in a foster home. It was kind of hard to adjust in a new home under new rule, but we did adjust. And our foster parents really did the same thing that my grandma was doing. I was fortunate enough to complete school. I graduated from the high school outside of town, off the rez. I’m the only one that graduated out of the whole family.

Throughout school, I’ve always had assistance, people that knew my talent. I remember in fifth grade I used to doodle, just draw away. One of my teachers recognized that, and in summertime she would purchase art supplies for me. I would train my mind, drawing from newspapers and magazines. That’s all I did all summer long. Just draw, draw, draw. As I continued on into upper grades, I remember finishing a painting, my very first oil painting of a Navajo boy sitting on a ledge. It was my first sale. I remember standing in line at the bank. That’s how it started. Later, I went to Lawrence, Kansas for a year. And then to the Institute of American Indian Arts in Santa Fe. I didn’t really know anything about museums, but that’s where I learned. I did a year and a half there. I didn’t finish but I continued my artwork. 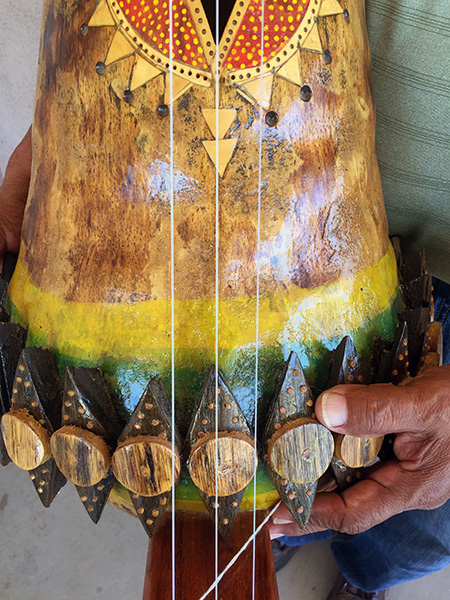 Back in high school I saw a photograph in an encyclopedia that really intrigued me. It was of an Apache man dressed in long hair with a high leather boots and and a leather pouch on his side. What he was holding, that’s what caught my eye. An instrument. At that time I still traveled back and forth to the reservation. I asked my grandfather if he would teach me what was in the photograph. That’s how we started it.

Was that the first time you’d seen the violin?

Yes. I didn’t know anything about it. Nothing. I started going to my grandfather, and he gave me the history of it. It dates back to the 1800s. It was used for courtship. I think the idea came from someone who saw a European violin, when the Spaniards came through. He probably looked at it and studied it and went back and produced what we have now. I wonder what that first model sounded like, what it looked like.

The music itself related to courting. The songs. But my grandfather passed on before he completed that part with me. He explained to me the history and what it stood for and the construction of the violin. But some things were left out.

What parts was he able to teach you?

It was a lot of trial and error. That’s our traditional way of teaching a young person. I remember my very first piece, he instructed me what to do, how to put together. He would just tell me.  He had a piece that he was working on and he would bring it out and say, I want you to look at it and understand it, what it feels like, what it should look like. So I tried one. My very first piece I did with a knife. I took all the pulp of the agave out. It was hard. Now I have a carving set I use, so it’s much easier. But I was so proud of it when I was complete. It was plain, no design. And this is what it sounded like: [long silence]. 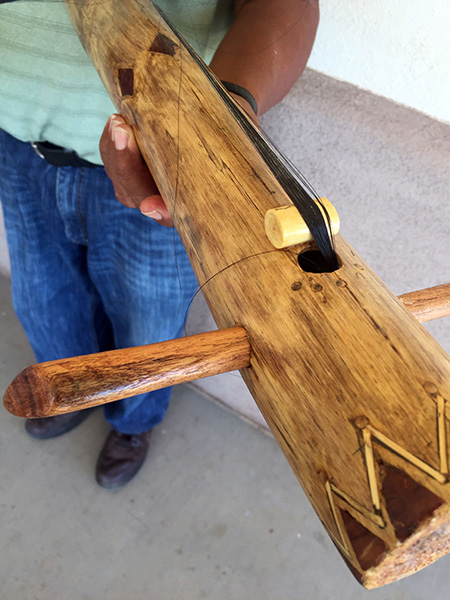 I did what he said to do, but there was no sound! So, I went back to him and told him and he just grinned. Then he just laughed out loud. He told me what was missing, and to go up to the mountains and get it. Pine pitch. Resin.

You needed resin for the strings?

Yes. You put that on the strings, and you’ll hear a sound. And sure enough. I did what he said, and I remember when I made the first stroke. Whoa! A sound! From there, the instrument itself became alive. It had real spirit to do its job.

A man would play it and sing for courtship, but in secrecy. The person he was playing for wasn’t aware of what was going on. Within four days, she would approach him. These songs relating to courting, that’s the part my grandfather never taught me. I think if he was still alive, that would be the next part of the teaching. I still believe the violins in museum collections still obtain the power they originally held. That’s why I respect what I do. I don’t take anything lightly. Let’s say I was working on one outside, and my grandkids came around. I would say, Go away. It’s not for you. In our traditional way, there comes a time when an individual is ready to be taught. But not at an early age.

A lot of this is not in books, nothing is written down. It’s a word of mouth that is passed down from person to person. None of my grandfather’s family knows how to make one of these. To my understanding there’s no recording whatsoever anywhere of the instrument being played and sung.

The way you describe it sounds like kind of a magic spell.

Yeah. It was the songs that would get into her mind and somehow move her. Kind of like E-Harmony.

Yes, it’s a matchmaker. I’ve had people ask me whether playing the violin is how I picked up my partner. But no, that came before. Still, everywhere I go I have a display to show the history behind it. Once a man came by and read it and then he stood there for the longest time. Then he came back with his daughter. She wasn’t aware of what he was up to. He asked me, What I read, is it true? I said yes. If that’s so, can you help my daughter? She was puzzled. What are you saying, dad? I explained to him that the process takes years of training. Another man came asking the same thing, but for himself. He was looking for a partner. I don’t know what to tell them. My grandfather passed away without teaching me that part. I think if we hadn’t lost the songs, there’d be a lot of people with partners forever.

And now you are reviving the art form.

Yes, that’s what I’m doing right now. I’m reviving a lost art that I nobody does. Right now, there’s a handful of makers, that’s all. A lot of them are taking it with them. This is a lost art. You only see the violins in museums. 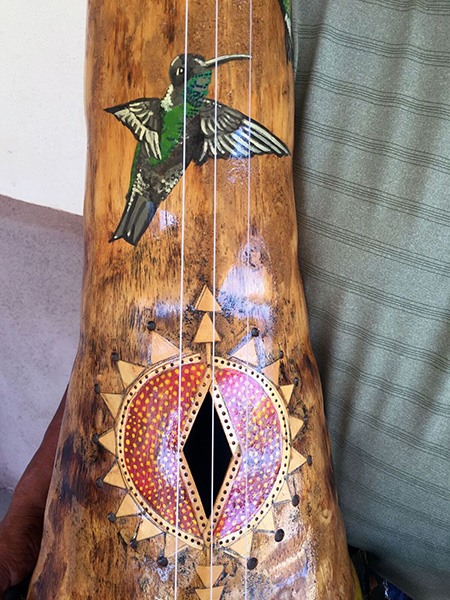 I remember my first time in Santa Fe, in the market, I’ll never forget it. I had my display of all of the violins where people would see it. One person came up and picked one up and said, “Is it a rainmaker?” Another came and said, “Is it a birdhouse?” From there on I made a commitment to educate the public. I do that in lectures, in demonstrations. That really makes me happy. I look at all the people around me when they hear the first stroke—that expression on their faces, just to hear horsehair making a sound.

Can you talk about your relationship with the agave and harvesting the plant?

The agave is gathered after a year’s growth. Like I said, a lot of this is ongoing trial and error on my part. It has to be harvested at the right moment. When you play it, you can feel the vibration of the sound bouncing up and down the instrument. That’s how you know it’s really coming out alive. Depending on the harvest, the thickness of the wood itself, the numbers of strings, and the tension on the strings. When it’s harvested at the right moment, it’s easier to carve, easier to take the pulp out. If it’s harvested when it’s still green, it’s harder to work with. Because you want to get as close to the wood as possible without the wall getting too thin. If you leave too much pulp inside, the sound is absorbed; it comes out like a plump sound.

Can you walk me through what it is like to harvest? What do you see and hear during that experience?

I usually go out in the fall and look at the plants. There are different species in different areas. This would be in a lower region. I like to use plants with a smaller base. In one area where I go, people worry about seeing mountain lions there. But that’s where the teaching comes in again. We as native people always show respect to the earth and the wildlife. So everywhere I go, before I step out of the truck, I mention, I am here too. I live here too.

You announce your presence.

So far I haven’t seen nothing. Not even a snake.

Do you still have the first violin you made?

No, I don’t have any of them. None of them and I’ve been doing this over 40 years. 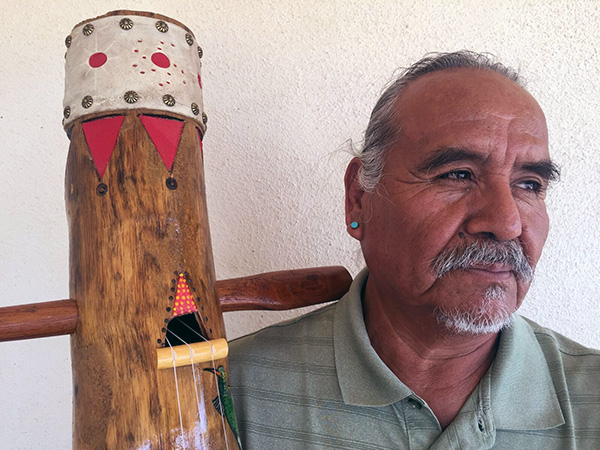 I’m hoping this doesn’t die out. That’s my main hope for the culture itself. The Western Apaches were known for their fiddle making. We were the only ones that made them. I’ve read in books that Geronimo had one when he was captured. I’m pretty sure he got it from us.