Embodying the Spirit of Tucson Meet Yourself 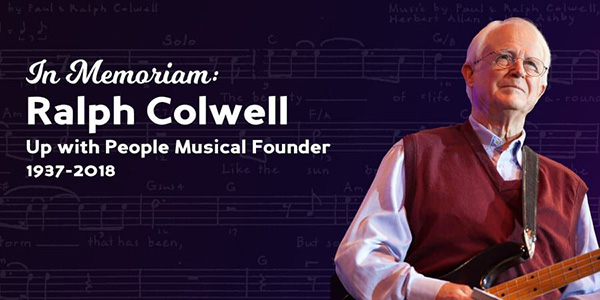 Former Tucson Meet Yourself board member, Ralph Colwell died of cancer on December 12, 2018 at the age of 81. We remember him for his service to the organization and for helping to carry the festival into its current phase.

“Ralph was very positive, generous person and a joy to work with,” said Jim Griffith, folklorist and founder of TMY.

Colwell served on the TMY board member from 2012 to 2015, bringing his love of music, community, and culture to the festival. An avid musician, he formed a band as a teenager with his brothers, performing on the Tex Williams Show and signing a recording contract with Columbia Records. He was playing bluegrass music the day before he died, said Cyndy Watson, a longtime friend who served on the TMY board with Colwell.

Colwell was with the group Moral Re-Armament group (now Initiatives of Change) and traveled with its message of community and positivity to over 60 countries. He is credited with writing the song Up With People and helped develop the program of the same name. He came to TMY’s board through Mia Hansen, a longtime member of Up With People, and the director of TMY from 2010 to 2013. Hansen remembers Colwell as a “gentle man and a gentleman” who brought a wealth of cultural understanding to the organization.

“He was so very fond of Tucson and saw it as a microcosm of the world, much the way he saw Up With People, the organization he helped found,” Hansen said. “He saw how Tucson Meet Yourself celebrated the people and cultures that lived here and really worked to uplift that.”

Hansen said Colwell also helped the festival during a time of transition. “He helped TMY move forward from what was then a small all-volunteer-run entity, to a well-established organization,” she said.

For several years, TMY was managed by an entity called the Cultural Exchange Council. Colwell and other board members worked to develop the Southwest Folklife Alliance (SFA), an organization dedicated to producing the festival that would also support and celebrate folklife activities and programs regionally all year round, such as the direct support of traditional artists through what is now the Master-Apprentice Award program.

Watson, a retired educator, said Colwell’s service to Tucson Meet Yourself was a natural fit. “It was what he was about, an extension of what he was doing for many years in Up With People, lifting and celebrating people through music and culture around the world. He embodied that.”

Tim Escobedo, director of operations for Tucson Meet Yourself remembers Colwell as consistent helper. “He was a phenomenal volunteer, both at the festival itself and throughout the year. He helped me out a lot,” Escobedo said.

We are grateful to Colwell for his contributions to TMY, Tucson, and beyond.

2 thoughts on “Embodying the Spirit of Tucson Meet Yourself”