The Possibilities of Personal Geographies: A Folklorist’s Maps

Nic Hartmann’s love of cartographic ephemera began with family travels, scooping up roadmaps, tourist guides and other travel goodies. It was all fodder for an emerging folklorist, and what inspired his lifelong fascination with maps and map-making. Nic shares some storytelling and images of his idealized landscape, “Solera,” and how his anthropology background balances with his creative expression in personal geography. 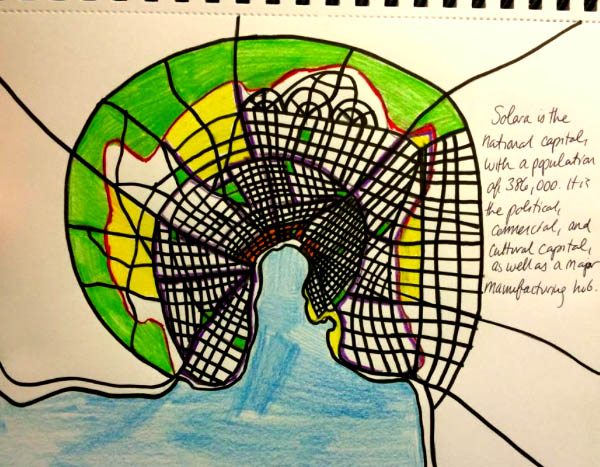 Is this intricate fantasy city called Solera your vision of utopia? When and why did you begin this mapping? How does it apply to your professional folklorist world (and your personal world)?

I grew up in a family that traveled a lot, and when they did, I often received their maps, travel brochures, and hotel directories as small souvenirs. (It was from the latter that I first heard about Tucson!) They print so many of those things, that they often get tossed, but as a six-year old, I thought they were the best gift I could receive. I would read atlases, and think about the types of adventures that I could have. As a result, I gained a pretty strong knowledge of cities, countries, highways, and landmarks; in many ways, it really set the tone for being involved in an organization that focuses on creative placemaking.

In addition to reading, I also drew my own. Certain atlases had the shapes of cities, and not just the location, and I used to think about what my world would look like. It became a hobby, and one that I continued for most of my childhood, but I grew very self-conscious about it as a teenager, and stopped for several years. 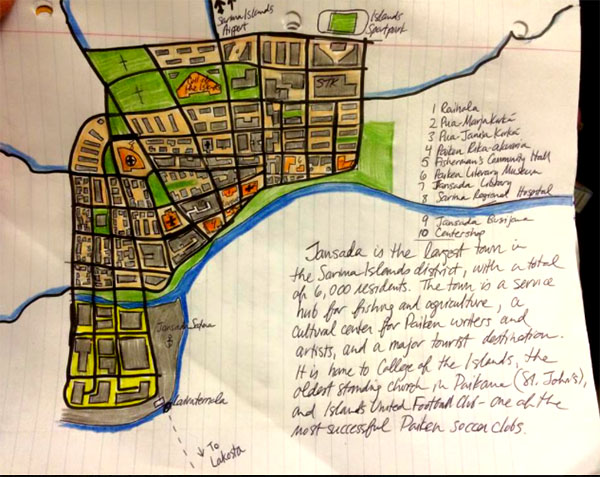 In college, however, I returned to it, albeit unexpectedly. In addition to my folklore courses, I took a few courses in geography, and I grew to love my geographic methods course, where I learned about GPS, remote sensing, and — one of my favorites — aerial photography. It was fascinating to see the world from above. At the age of 21, I took a summer course in permaculture design, where we were strongly encouraged to map out our ideal homes, landscapes, and communities. I started drawing out a city based on permaculture ideals, which I named Solara; from there, it grew into an entire country, which I named Paikema.

The name comes from the Estonian päike maa, “land of the sun.”  I took Estonian courses in college, and spent my final semester of my undergrad in Estonia. While there, I managed to purchase several local maps, and I noticed that they were highly detailed; not only could you find the streets and landmarks, but also the outline of each building, whether it was an apartment building or a church. I’ve found these maps to be the most inspiring, and they serve as a model for my drawings.

There are certainly folklorists interested in mapping. For example, Henry Glassie, a scholar with whom I had a chance to study at Indiana University, is well-known for his maps and sketches. One of my fellow colleagues in Newfoundland, folklorist and author Emily Urquhart, created a stunning set of drawings for her fieldwork on the Bonavista Peninsula. There is a lot of artistic freedom for those who wish to include this type of work.

Folklorists are so interested in the worlds that people create for themselves, and how they make sense of their lives. There are a lot of folklorists who are interested in imagined communities, nostalgia, and sense of place, and I eventually realized that, if we can study how people shape their world, why can’t I create one for myself? After all, I am part of many folk groups; being a professional folklorist doesn’t exempt me from having my own folklife. 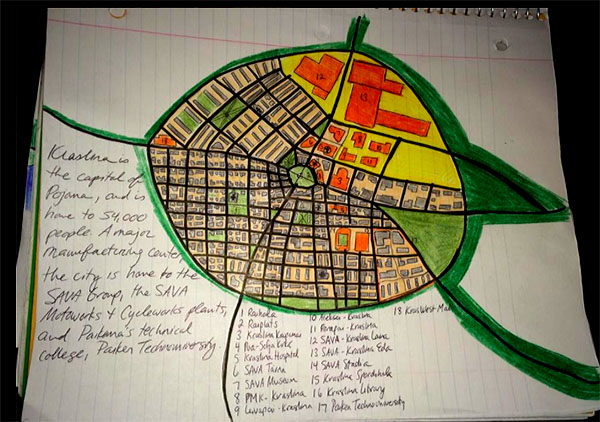 Please highlight a few elements of your maps, including road maps symbols and legends. Anything you want to say about the creative process and the tools used?

I draw from actual places for some of my drawings. I have based maps off of major cities such as Helsinki and Pittsburgh, as well as smaller cities in other places, such as Canada and Estonia. I have designed my own communities, both small and large; there are drawings of small farming towns alongside larger cities.

In terms of place names, I have created the basics of a language called Paiken, which derives from the languages of places I have lived, or visited; it’s a work in progress, but it is currently a mix of Estonian, Norwegian, French, and Spanish. I do base places off of places around me, and Paikenize the names; for example, Tucson became Tizona, and Ajo became Ajámai.

Originally, I was drawing on a basic lined notebook, using a Bic inkpen and a set of Crayola colored pencils. Eventually, I graduated to a set of brush pens, a pack of Prismacolor pencils, and a sketchpad. It takes a few hours to draw a more complicated sketch, while others can be done in less than an hour. I tend to sketch things out on my lunch break, on the bus home, or after my daughters have gone to bed.

Will you comment about the importance of personal geographies in a folklorist’s world?

Personal geographies aren’t just important to folklorists, but to people in all fields. We map our own landscapes on a daily basis; we do it through the stories we tell, through the place-based knowledge that we learn and share among others, and through our creative practices. Songs are a major indicator of personal geographies; you see a person’s sense of place emerge in corridos as much as you see them in a country song.

Why maps are important to documenting culture?

If you think about why people use maps, it is often to gain a sense of familiarity with a place, to find directions to a place, or to understand how places exist in relation to one another. Folklorists do ethnography to document a place, or a community, through its folklife; we interview people, participate in cultural practices, and document traditions. Those stories, images, and experiences add context; in reality, ethnography is really an act of mapping, one that tells us about a place, creates familiarity with a place, and helps us to understand how people and places exist in relation to one another.

Another thing to consider is that there are many subcultures who use maps as part of their activities; one of them, called “roadgeeks,” who collect road maps, spend their time travelling certain routes, or make a hobby out of spotting certain features in a highway, such as a wrong-way concurrency (a route that is simultaneously north- and southbound). Some people look for an unusual place name, such as Truth or Consequences; my wife and I are fond of the Quebec town Saint-Louis-du-Ha!-Ha!.

BorderLore: In the time since this was printed, you’ve moved from Tucson to Iowa. What new personal geographies have you explored and how has your map-making practice evolved?
I go in waves between creating a more detailed and thorough imagined world, to creating art that is detailed, thorough, and about the world in which I live.I left Tucson in March 2016 to take an educator position at a museum in Cedar Rapids, Iowa, which I held until June 2020.  For over four years, I worked with several thousand learners a year, designed curriculum, and worked to up the folklife programming at the museum. For most of that time, my map work existed on the sides of my notebooks, and I tried new forms of illustration, including Orthodox iconography and lettering. In 2017, I connected with comic artist Marek Bennett, a New Hampshire-based comic artist who does a lot of work with oral histories, primary sources, and hosting comic workshops. It just so happened that Marek also worked with my friend and colleague, the folklorist Andy Kolovos at the Vermont Folklife Center. Marek gradually became a mentor to me and continues to provide me with a lot of creative support from a distance.
Marek’s comic work inspired me to start sketching out comics based on everyday happenings, while my wife encouraged me to take some of the aerial-style work into a 3-D world. I began turning the maps of Paikema into three-dimensional settings. This has added a new level of depth to my work, and even inspired me to start sketching out places when I travel. Most profoundly, a trip to the American Folklore Society meeting in Baltimore was a catalyst for my sketches; I spent most of the trip taking notes, sketching people, and taking photographs of what I saw: everything from row housing to the Freddie Gray mural to plenary folklife lectures.  Then I would go back and fill in the gaps or create new drafts. My comic drawings of the conference and of Baltimore brought me an audience I didn’t expect, and they encouraged me to keep going. Since then, I have drawn comic-style panels of Paiken cities, foodways zines, personal reflection pieces, fieldwork prompts for citizen folklorists. I recently completed a first draft of what will be my first long-form project.
In this time of pandemic, people are not traveling much. How does the act of creating maps of our personal geographies help foster a sense of exploration and adventure?
When we come up with imagined geographies and landscapes in my online courses, I tell kids that these worlds are a reflection of who we are, but also a reflection of the kind of world we hope to be a part of. Even in a fantastical world, one cannot go without thinking realistically, and it’s okay to create a world that has conflict, because otherwise the world will not grow and evolve. Creating those worlds gives us the capacity to think about what we might do to make that world better, which helps us think about how to make our own world better. What we include or omit says a lot about our worldview. By drawing both imagined and personal worlds, I have learned a lot about myself during this time. So much of the learning comes through just grabbing a pen and starting somewhere. The fun comes when you run out of space and you look down at the paper, and you’ve suddenly created an entire town or landscape. Then you can dive in further and create stories for each building, each block, each county. Thinking small and thinking big at the same time is possible.
Nic Hartmann is an independent folklorist and lead behind the Live & Active Culture initiative in Cedar Rapids, Iowa. He holds a PhD in Folklore from Memorial University of Newfoundland. Nic  was the Folklorist-in-Residence at the Southwest Folklife Alliance in 2015-16 and a recipient of Archie Green Fellowship of the American Folklife Center at the Library of Congress.

1 thought on “The Possibilities of Personal Geographies: A Folklorist’s Maps”