An Ordinary Act: Bicycles as Vehicles for Change

When Tucson native Vanessa Cascio was living in Chicago working long, odd hours as a social worker, she couldn’t always rely on public transit. So she bought a cheap, beat-up cruiser bicycle. The only problem was, she didn’t know how to ride a bike.

“It’s not that I wasn’t allowed to ride growing up, but I had brothers and they were the ones who were allowed the freedom of mobility to adventure on their bikes. I wasn’t really encouraged,” said Cascio, who grew up in a Mexican-American household. 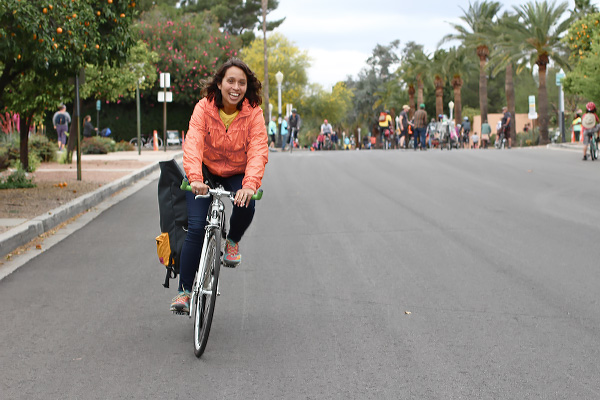 So Cascio went to the Chicago lakefront with her then-boyfriend to learn. “I didn’t have a fancy bike or cycling equipment. I had a backpack. My main goal was to get from point A to point B without getting hit by a car.”

When she was ready for the streets, she rode with a buddy for more confidence, she said.

But it didn’t take long before Cascio was enjoying the ride. “Oh my god, I thought, I’ve been missing out all these years,” she said. She started saving money on taxis if she went out on the weekends and started meeting more friends who were using bikes to get around.

Now Cascio works as a community liaison for Living Streets Alliance, a Tucson organization that works to transform streets into vibrant places for walking, bicycling, socializing, and play and to create safe and equitable transportation.

To Cascio a bicycle is “a vehicle for change. It is challenging our norms. That’s what it embodies.”

No such thing as a “typical” bicycle commuter

“That image doesn’t necessarily pop into your head if you think of bike culture,” Cascio said.

But there’s no such thing as one, uniform bike commuter culture, said Kylie Walzak, a program manager for LSA. “There are people who ride bikes. It’s not necessarily a ‘subculture.’”

Or if it is, it’s a diverse one, since people use bicycles for different reasons.

“For a long time bicycling in Tucson took on one shape and form, which was a male cyclist in spandex going up Mt. Lemmon fast,” Walzak said. “It was easy for people to write that off, because they couldn’t see themselves in that position.”

Cascio said she resonates with people who don’t see bike commuting as an option. “I was once one of those people. Now I do it and I’ve really embraced it. I really enjoy it.”

Cascio and her colleagues talk a lot about the “invisible cyclists” — “people who bike at 2 am to get to their service or restaurant job. They don’t always get counted.”

Bike culture also includes people who use an adaptive bike, Cascio said, recalling the special needs adults she worked with in Chicago. While there she started a bicycle club with them. “These are adults with limited capacities, different physical limitations, but riding a bike was such a joyful experience for them.”

Making it easier to ride

In Tucson, LSA runs several programs to counter the significant infrastructural barriers and challenges that prevent or limit people from riding bikes.

“It’s not as simple as telling people to walk and bike more. It’s a whole systemic issue — the way we design our streets and lay out our cities,” Cascio said.

Infrastructure is critical in thinking about bicycle-friendly cities, advocates say. “If you think about how much space we’ve allotted for cars, it’s crazy,” Walzak said. “But we didn’t always build our cities this way. In Tucson it was a conscious decision in 40s and 50s. We can undo as quickly as we did it.”

But while transportation planning and urban infrastructure are part of the long game, short-term solutions involve educating the public about bicycles and how to use them safely.

Cascio manages LSA’s Safe Routes to School program in South Tucson, helping youth and families gain access to bicycles and incorporate them into their lives. “Owning a vehicle is really valuable. It ensures your kids can get to school, it’s important for social mobility. I get that. But how can we work together to remove the barriers to biking and walking in Southside communities?” she said. 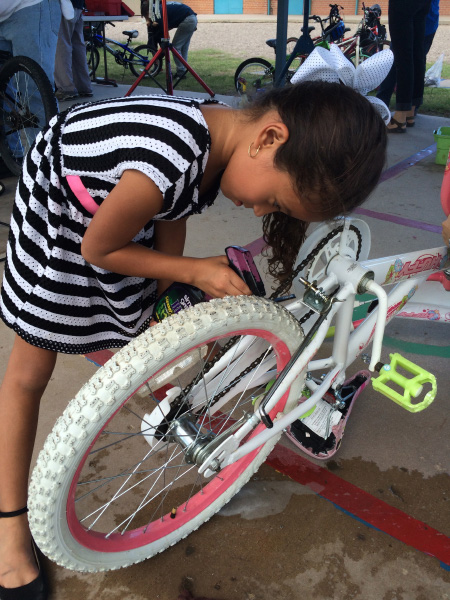 To address some of those barriers, LSA runs a Mobile Bike Repair unit, a free service offered to schools and neighborhoods that teaches youth about basic maintenance. “Kids come back,” Cascio said. “They know how to fix a tire now, but they just need the tools.”

The organization also connected Tucson to the Love to Ride app, a social media application to incentivize more people to ride. The app allows you to log your miles, connect to other people you know who are biking, and calculate your calories burned, Cascio said.

Walzak coordinates Cyclovia, a biannual event that closes off streets to car traffic and encourages bicycling and walking along a designated route. The event was first popularized in Bogotá, Colombia and has spread globally.

“We remove as many barriers as we can and invite everyone to come out and try it. The idea is to invite people to get back on the bike and experience the joy of getting to from point A to point B with your own pedal power.”

The event also creates an opportunity to have conversations about public space, accessibility, and connectivity, Walzak said.

“Everyone will get in their car the next day for their commute because that’s what 90 percent of people do, but we hope the experience will make you think differently about your behavior on the streets.”

Meaning maybe motorists will pay more attention to people on bikes because they’ll know what it feels like, she said.

Duncan Benning, who owns Transit Cycles a bike shop on Tucson’s west side, says that in U.S. the bicycle is still primarily thought of as form of recreation. But internationally, bicycles are recognized as tools, he said. In London, for example, delivery companies like DHL and UPS do all their deliveries via bike since parking is so difficult.

Benning, who’s worked in the bicycle industry most of his life, was interested in serving every day cyclists, especially commuters. His main clientele are people he calls, “bike curious,” and his shop helps them “hop the fence” into buying a bike.

Since cost is often the primary barrier, Benning likes to point out that while a good bike might cost anywhere from $600 to $2000, the maintenance might only be a few hundred dollars a year. “If your bike is your main mode of transport, you easily recoup that in saved gas money and car maintenance,” he said.

Benning is particularly passionate about cargo bikes. When he and his wife had their second child nine years ago, he wasn’t interested in spending money on a second vehicle. He’d seen cargo bikes in Portland and Seattle and decided to try one.

“There’s no better way to get in shape than to push a 90 pound cargo bike with another 50 pounds of kids in there,” he said.

His shop now sells Xtracycles and the Dutch-style front-loading cargo bikes known as Bakfiets. They cost considerably more than regular bikes, but again, pay for themselves over time in gas and maintenance savings, Benning said. 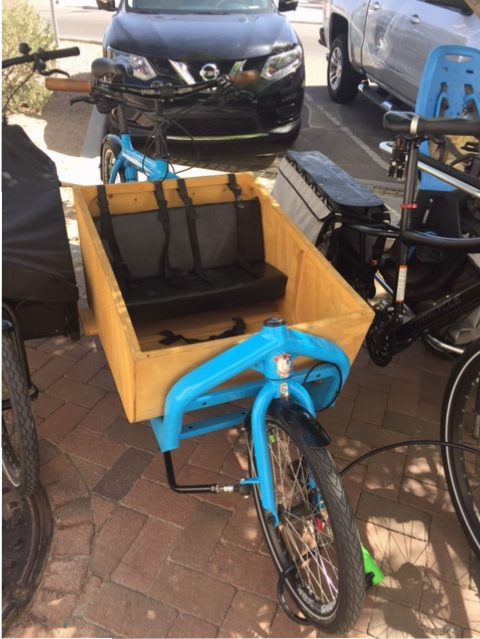 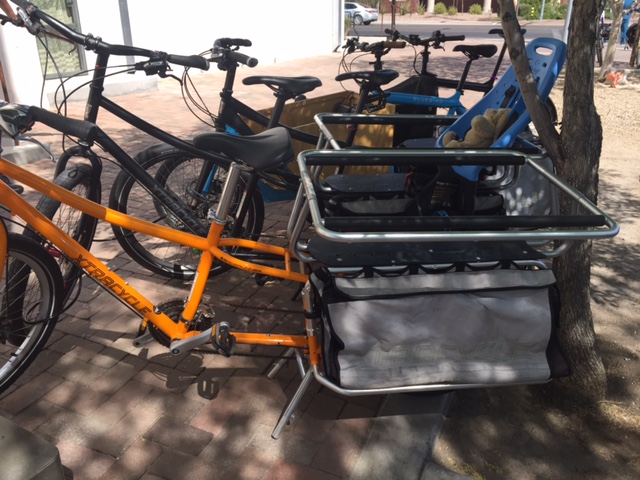 Walzak, a bike commuter, rides an Xtracycle. Most often, her “cargo” is her almost-two-year-old son, Clyde, who loves riding.

“He could be having the worst day, but if I say, ‘Do you want to go on a bike ride he always does. It’s a full sensory exploration — sight, smell, sound. We get to be close. It’s the best time of day together,” she said. 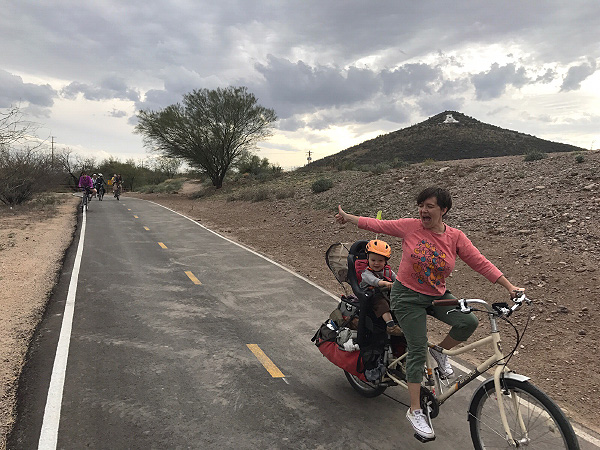 To incentivize more people to ride, Benning does a “bottle drop” once a month, leaving a water bottle filled with small gift from his shop — sox, gloves, or a gift card — in a location somewhere in town. Using Instagram, he gives clues to where the bottle has been dropped, and cyclists can try to find it. He did a bottle drop for the 12 days of Christmas last year, one a day leading up to the holiday.

“My hope is that people get excited, that they’ll say, ‘Hey we’re out let’s go ride there.’ And to check out parts of the city they’ve never ridden to.” Benning said.

The also help people learn about bike safe areas of the city. “People don’t always realize there’s a bike path or a route somewhere. Maybe they’ve been to the Tucson Museum of Art, but they didn’t know you could ride a bike all the way through Presidio Park or La Placita to get there,” he said.

Benning also organizes a ride on the third Wednesday of every month to Dragoon Brewery, using the Santa Cruz River path and Barrio Hollywood to avoid streets with car traffic.

He agrees that infrastructure is part of the main challenge to getting more people on bikes. He said “In Tucson, the early adoption of striped bike lane gave a sense that we’re doing great, but it’s really not enough.”

Sometimes creating culture of accessibility, walkability, and mobility involves activities that don’t require bicycles at all.

Art plays a large role in helping neighborhoods become more walkable and livable, Cascio said. She helped LSA coordinate a project with Pueblo Gardens Elementary School and neighborhood in south central Tucson, where nearby high-traffic-volume streets and train tracks cut the neighborhood off from others neighborhoods. 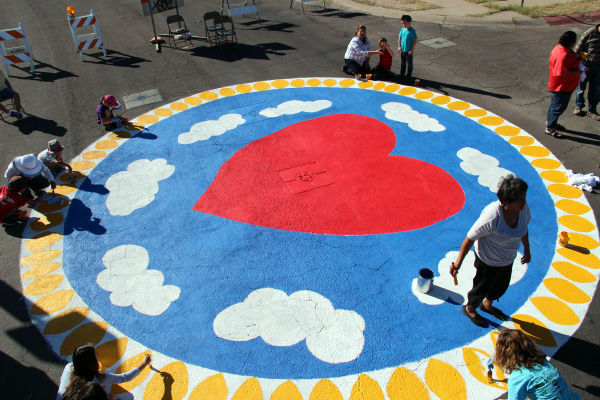 While LSA will continue to advocate for infrastructure and transportation improvements there, Cascio said short-term efforts engaged local residents in creative ways.

A daylong fiesta invited school students and their families to design and pain two murals on a street intersection, an artistic tradition popularized by City Repair Project in Portland, as a way to bring attention to new possibilities for pavement, including an accompanying tree-planting project aimed to bring more shade to sidewalks.

“It’s a tightknit special place. The community embraced it. We need to do more of that,” Cascio said.

Doing more of that, is what all three of these advocates want to happen with bicycling, too.

Years ago, as a bike commuter in Chicago, Cascio believed she was courageous. Maybe so, but that misses the mark, she says now. “As an advocate I don’t want people to have to be brave to ride. It should be normal and accessible.”

Walzak agrees. “The act of getting on a bike shouldn’t be something extraordinary. It shouldn’t take any special gear, or deep reserves of willpower. It shouldn’t be perceived as something courageous or foolish. It definitely shouldn’t be viewed as unsafe. I think our goal is to make the simple act of riding a brilliantly simple machine as ordinary as possible,” she said.