As the official Arizona State Balladeer since 1966, Dolan Ellis’ expansive grasp of culture and music has kept the connection of Arizona’s unique land and its people alive through his storytelling performance. Artist in residence at the Ramsey Canyon’s Arizona Folklore Preserve (AFP), Ellis founded AFP in 1996 to share Arizona’s songs and stories as an intimate musical experience (which now thrives in collaboration with UA).

“Balladeering is a very important art form,” says Ellis.  “Many important messages of who we are as Arizonans live and are preserved within the lyrics of our storytelling ballads.  Historians write the history books, but Balladeers bring it alive in song.”

In his role as Balladeer, Dolan has written more than 300 songs, performing with his 12-string guitar and often illustrating his music with a backdrop of his large-screen photography. An original member of The New Christy Minstrels, Ellis performs at the Folklore Preserve, having just retired from all traveling and road work outside the state of Arizona.  His songs are forms of oral history, carrying listeners back in time, documenting people and places, and celebrating nooks and crannies in a musical commemoration of regional history. As he explains: “No more singing “On the Road Again”  with Willie, while traveling down some distant highway.  No more missing my “Circle K” coffee, while traveling out of state…From now on, I will be devoting my full attention to my work and music as “Arizona’s Official State Balladeer”.  Make no mistake here, folks.  I’m not done yet.  I am only shifting to a lower gear and putting it into Full Time Arizona Four Wheel Drive, for better traction…”

On contemplating the cowboy in the context of Arizona ballads:
The Cowboy personifies the things that have made this nation and this state successful.  He is self-sufficient, honest, dependable, hard working, tough, courageous, and loves God and country…  They are proud survivors and make do with what they have… just like our forefathers before us did.  Our cowboys help to preserve the image of those standards in life that make us strong an independent as a nation.  It was Congressman Mo Udall who once said, “Those pioneers and Cowboys who came west with the wagon trains, faced hardships beyond imagination.  They braved being killed by angry native people and outlaws, they faced the burden of child birth on the trail, they withstood sickness, violent storms, brutal heat, freezing temperatures, and the danger of wild animals, scorpions, and rattlesnakes. One has to ask, How they did it…without government assistance!”

On favorite Arizona ballads, Ellis tells this story:
My ballad, “Frank Murphy’s Impossible Bradshaw Mountain Railroad” is one of my favorite storytelling songs, with a moral to the story.  Frank Murphy built this railroad against everybody’s advice.  Nobody would loan him the money to build it. (Too many trestles to build, too much back filling needed, too much ongoing maintenance and upkeep… The banks all told him, “Frank, you’ll never see a profit on that railroad.”)

Well, Frank’s vision was a bit different from the other naysayers.  He knew that a R.R. was desperately needed by the miners up in the Bradshaw Mountains, and that it would become a very successful venture.  He built his railroad in spite of the disbelievers, and with the passing of time, his R.R. became very successful and profitable.  To me, this story and ballad speaks volumes about the rugged individualism that exists in Arizona’s people.  Even today, it still holds true.  We are still a new land, out here in Arizona, and it requires adventurous people, who are willing to pull up stakes, move out here, and build a new life for themselves.  The lazy and the faint of heart stay where they are back home.  It is the entrepreneur who becomes Arizonan.   I believe that it lives in the DNA of our culture and it needs to be passed forward to future generations.  That’s where the importance of folk ballads comes in. 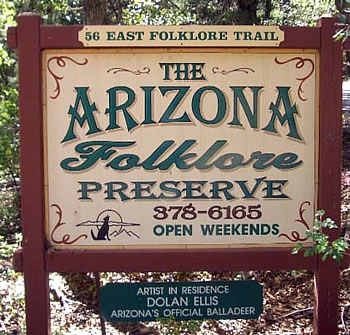 Carrying the title with great pride, Ellis speaks to young songwriters on the future of balladeering:
I will soon have been “Arizona’s Official State Balladeer” for 50 years.  I will also be 80 years of age next month.  Arizona will be needing a young balladeer to take my place pretty soon.  Someone who is driven to write and sing songs about his or her love for this land.  Where are you, young balladeers?  I’ve been looking for you, but I don’t see you out there.  If you are a young singer/songwriter/balladeer, you need to get started right now, so that you will be ready when the opportunity presents itself, one day soon.  You will need to have developed a significant catalog of Arizona ballads and stories, and to have previously established a strong reputation for what you do.  You need to be ready to compete for the position.  So, if you are interested…GET STARTED NOW!!!