As the Southwest Folklife Alliance solidifies its new home at the University of Arizona’s College of Social & Behavioral Science and takes steps to launch its website and full suite of programs over the next few months, a few morsels of news and activities have jumped ahead of schedule. A story in the Tucson Weekly on August 14, 2014 by Mari Herreras offers a good overview of what is in store for the Alliance and the vision behind its conception. Read the story from the Weekly here.

Last week, the Alliance was delighted to join in the celebration of the 50th anniversary of Los Changuitos Feos de Tucson — the first youth mariachi group in the United States, responsible for starting a movement in music education and cultural pride that has only grown stronger over the decades. SFA sponsored a panel on the history of mariachi music in the U.S. featuring top-notch scholars from around the country and moderated by our own Dr. Maribel Alvarez.

The launch of our community, collaborative research initiative Continuum: End of Life is looking good with a robust group of close to 25 community researchers/ participants scheduled to receive training in ethnographic methods and anthropological / folkloristic perspectives on cultural diversity and death, pain, and grieving traditions and beliefs. The goal of the research that participants will conduct is to produce practical materials that hospice workers, nurses, doctors, families and others involved in caring for terminally ill patients can utilize to make their work more culturally attuned and informed. This project will be one of the anchor programs of SFA in the coming year; while SFA gets its bearings as a new organization, Tucson Meet Yourself is being identified as the host and organizer of this important project. More information on the project can be found here. 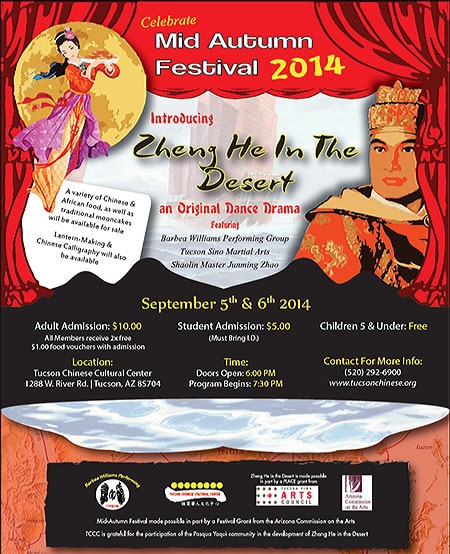 The Tucson Chinese Cultural Center will bring together giant puppets, mooncakes and geography in a program of great entertainment and culture on September 5 and 6. The event includes an original multicultural dance drama choreographed by Barbea Williams, called Zheng He in the Desert — an Afro-Chinese interpretation about the voyages of Ming Dynasty sea captain Zheng He to Africa and beyond.

Martial artists, African, TCCC and East Indian dancers will participate in the drama, as will local puppeteers being trained to animate the giant giraffe puppet (symbolic of the giraffe that was a gift from an African ruler to the Chinese emperor). A variety of Chinese and African foods, in addition to the mooncakes, will be served to attendees, who also will see traditional arts demonstrations of Chinese calligraphy and lantern-making.

Performances are at Tucson Chinese Cultural Center, 1288 W. River Rd. Admission is $10 adults, $5 all students (age 6 and above). Attendees also may purchase food voucher tickets for various items available at the multicultural feast. Festivities begin at 6 p.m. For reservations, call (520) 292-6900.