Indian classical music take us on a journey of sentiment, tradition and western style — all lifting us into appreciation of ancient and contemporary sounds that are an emotional ark over so many influences. 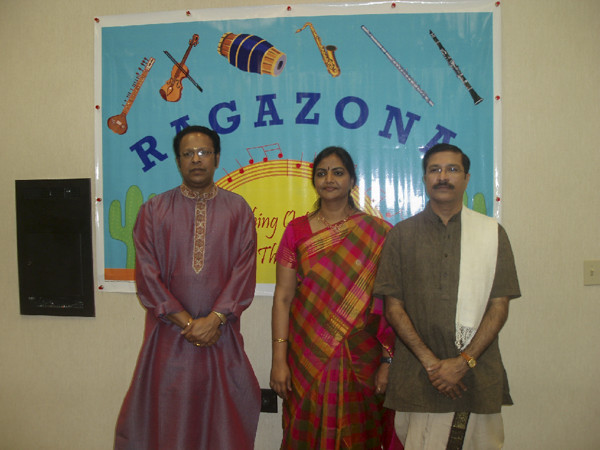 Music is a vehicle through which we feel empowered to support community, Ragazona founder Sumhith Veda Aradhyula believes. And Ragazona, another 2015 TMY artistic fellowship recipient, and the non-profit organization Sumhith started in 2012, promotes Indian Classical music and charity, as monies generated support programs that benefit our communities. 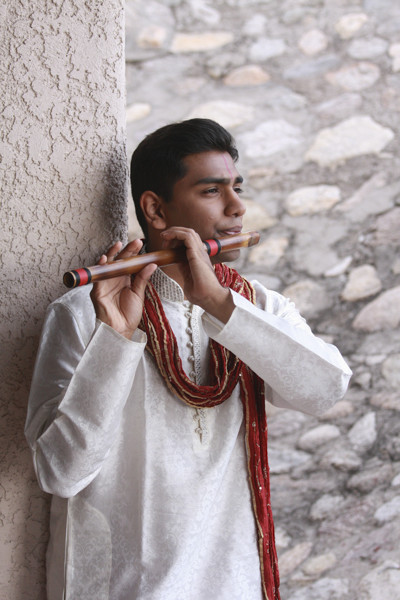 Sumhith, a senior at Catalina Foothills High School, began learning Western Flute from Dr. Renee Bond at age three. He later began learning the Indian Classical Music (on the venu and vocal) under the tutelage of Vidwan Surmani Sri Raman Kalyan. A graduate of the Indo-American Academy of Classical Music, Sumhith is currently serving as a 2015 IndianRaga Fellow and has written Carnatic via Western, a book that translates the intricacies of Carnatic Music into Western Staff notation.

The TMY fellowship gives Sumhith and Ragazona an opportunity to bring world music artist and Master of Carnatic Classical Music Vidwan Surmani Sri Raman Kalyan (aka Flute Raman) to Tucson, in an entertaining and culturally rich lecture/demonstration/concert, along with other visiting master artists.

B: Would you define the styles that TMY audiences will experience?
S: The Indian Classical Music systems of Carnatic (South Indian Classical) and Hindustani (North Indian Classical) are the predominant classical music forms of India and are the focus of our TMY concert.   Carnatic music remains largely unchanged, while Hindustani music gained quite a few Persian and Middle Eastern influences after interactions with other cultures.   While Carnatic music is largely devotional in praise of Hindu deities, Hindustani music evolved in the courts of kings of various creeds and religions and thus most pieces are romantic in nature, or praise the guru.  Carnatic music largely evolved in temples, and great composers are canonized.  These systems of classical music were then modified for stage performance to a mass audience, allowing for the continuation of this beautiful art as a means of public entertainment.

B: How does traditional music inspire you personally, and how it has affected your life?
S: For me, music is a form of expression that we can use to communicate thoughts, ideas, feelings and emotions that we have difficulty portraying through other mediums, such as spoken or written language. Indian Classical Music specifically provides me an avenue for otherwise difficult expression. The Indian Classical Arts place great emphasis on emotion, where different ragas, or scales, are said to evoke different bhavas and rasas, or feelings and moods. The scope for improvisation that Indian Classical music allows for, lets me express myself no matter which of the navarasas, or nine basic moods, that I might be feeling at a given time.

B: How you were influenced to learn to play the flute and other instruments?
S: My mother plays the veena, an ancient Carnatic String Instrument, and there has always a certain devotion to the complexities of Classical Music in my house. My mother views it as an ultimate or “authentic” musical form, such that – once a musician really becomes familiar with the nuances of the Carnatic genre – light music and film music become easier.

Around the time I was three, my elder brother began playing the clarinet in school. The jealous child inside me wanted to learn an instrument. For a few months I would run around blaring a toy kazoo, such that my parents finally decided to enroll me in music lessons with Dr. Renee Bond, the only flute teacher at the time who would accept a three year old student.

I continued to learn Western Classical Music from Dr. Renee Bond, but I truly wanted to learn the music that my mother played, and that I had been hearing in my house since I was born. In fourth grade, I got the opportunity to learn Carnatic Classical bamboo flute (venu) from Vidwan Surmani Sri Raman Kalyan.  I am forever grateful to my guru, Raman Sir, for the lessons in music, musicianship, and humility that he has taught me. From then on, I’ve played both the Western Classical and Jazz flute and the Carnatic Venu, and music has really become my strongest passion.

B: What does it take to become a traditional master, like Flute Raman, the artist you will bring to TMY?
S: Flute Raman, despite being one of the top Venu artists of his generation, is one of the most humble people I know.  As his student, I can see that he teaches selflessly and truly for his students and the art form.

His accomplishments in all fields of music are numerous. He has performed with many Carnatic, Hindustani and Jazz legends, has World Music Chart-Topping albums to his name, and is a three-time recipient of the Best Flautist Award from the Chennai Music Academy. Yet, he remains incredibly approachable and friendly to anyone interested in learning about or listening to Indian Classical Music.

In his own words, the only way to master Carnatic Music “is to practice until music becomes a part of you.” As any musician will say, the only way to perfect the nuances of Carnatic Classical Music is to properly practice for hours. I remember (Flute Raman) once talking about his brother, renowned Carnatic violinist Mysore V. Srikanth, who took a pledge to practice 15 hours a day for 30 days straight. Even now (Flute Raman) still practices a good 8 hours a day: ‘At the end of such rigorous practice, the instrument just becomes a part of you. You own the instrument, and it owns you. There remains no gap between what you want to play and what you can play on it,’ he says.

Raman Sir, as I call my guru, even now insists that many artists do not practice enough, even though nearly his entire daily schedule is dedicated to the pursuit of music.

B: Please tell us about some of the other artists who are perfoming.

B: How do you feel your TMY performance is illustrative of the commitment to traditional art and passing along traditional practice?
S: Indian Classical music is an art form that has been enjoyed for thousands of years. Ragazona has performed for the Tucson Meet Yourself for the past few seasons, and the Tucson community is always very receptive of our music.  The depths and details of Indian Classical Music are finally starting to penetrate the mainstream global music sphere, and a vibrant scene is arising in the Tucson Valley. As semi-professional artistes committed to performing and educating and enjoying our art form, our performance illustrates the eagerness of adherents to our system of musical collaboration, to share our method of emotional expression with the rest of the community.

Don’t miss the Ragazona performance at Tucson Meet Yourself: Saturday, October 10, 4-5 PM, City Hall Stage. Full program may be downloaded here, and is available on the TMY website under the HOW TO FESTIVAL section.