More than Luck: A Master Artist Passes on the Chinese Lion Dance

On a Sunday morning in March, nine teenagers are squat-waddling across the floor of a large room of the Tucson Chinese Cultural Center. Kevin Lau, a heavy-set man in his 30s wearing shorts and a t-shirt calls out, “Good job. Keep going! This is good for your hip flexors. You guys are young!” He claps a few times and when everyone has returned to the front of the room, he shows them the next move: hopping. 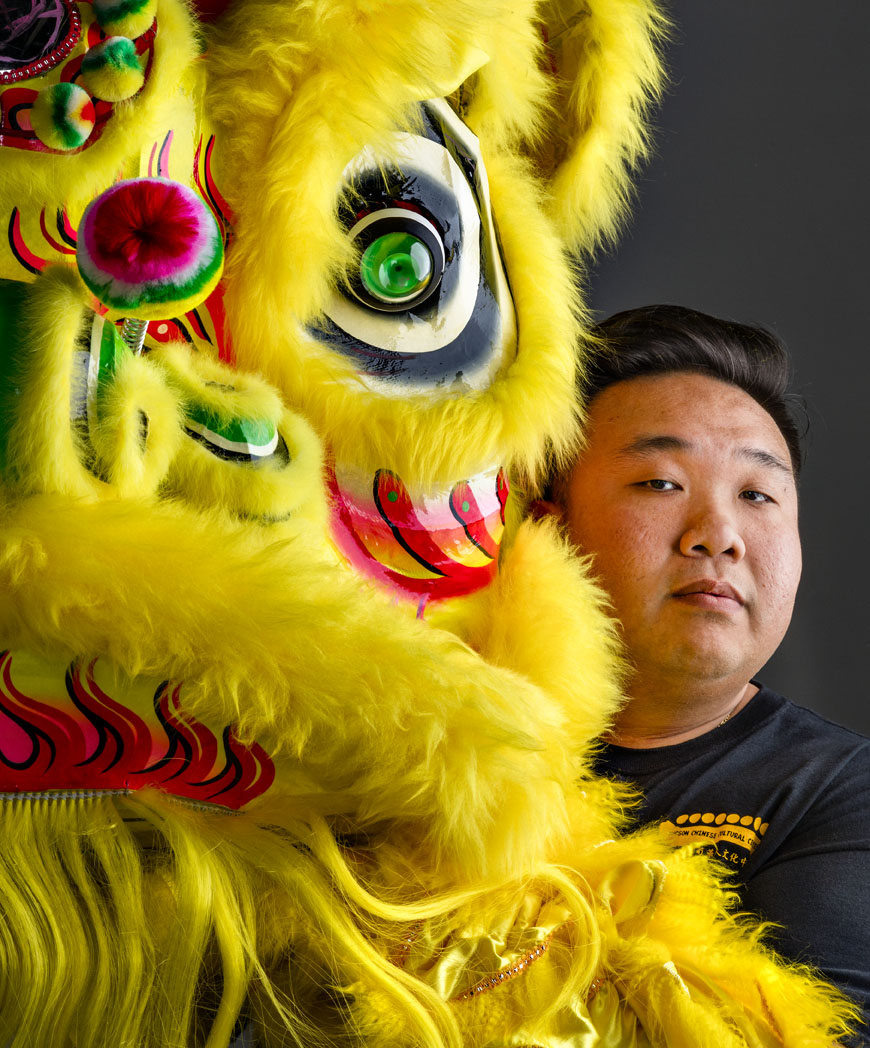 The students are learning basic strength and endurance moves for the Chinese lion dance, an acrobatic spectacle performed by two dancers who together portray a single lion. Their teacher, Lau, is a master of the artform.

Lau says he was captivated by the lion as a child growing up in Phoenix. “We grew up watching a lot of parades and Chinese videos that my grandparents would rent to teach us about our culture,” he says.

The lion dance is traditionally performed for Chinese New Year, as the lion is believed to bring good luck and scare away evil spirits. One dancer dances the beast’s front legs while the other portrays the lion’s hind legs and tail. The large lion’s head is worn by the front dancer, who can pull strings and tabs inside to open and close the lion’s eyes and mouth, adding lively expressions to the dance.

When Lau was seven years old, his grandmother purchased a the Chinese lion costume from California — a large colorful head with a cloth body. Already students of Kung Fu, Lau and his brother began to study the dance from several masters in Phoenix. In high school they began performing and continued into college, sharing the traditional lion dance at Chinese New Year festivals, as well as at the Phoenix Suns halftime show, the Fiesta Bowl Parade, and other grand openings and special events in Phoenix.

Lau then moved to Tucson to attend the University of Arizona, and shortly after began teaching at the Chinese Cultural Center, where he has helped pass along the tradition to young people for more than a decade.

There’s nothing quite like being inside the lion, Lau says. “When I’m in the costume I feel excited. You’re getting to show your talents and show something that a lot of people haven’t seen before.”

Lau says that performing gave him pride in his culture. “I also feel honored that I know this type of artform. My main goal is to pass on the artform to younger generations so that they can pass it on and it doesn’t die out.”

Lau says teaching others the lion dance is critical, particularly given how small the Chinese community in Arizona compared to other Western states like California.

“Having a good foundation is necessary for the lion dance because it’s very strenuous on the body. If you don’t have good fundamentals it will be hard for you to perform,” Lau says.

Typically performances are from 10 to 20 minutes long, Lau says. “You’re constantly moving. We’re trying to make the illusion of there not being two people but one whole lion,” he says.

That means a lot of coordination and trust, as one dancer jumps on top of the other, or both dancers simultaneously roll to the ground or jump over benches.

Lau also has his students think about how lions behave. “How they sneak up on something or how they look at things. If a lion is scared, what does it do? It shakes a little bit,” he says. 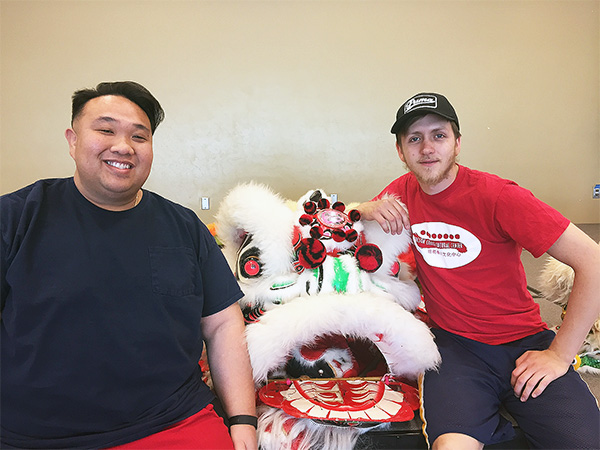 Master artist Kevin Lau with one of his apprentices, Jackson Veneklasen.

One of Lau’s oldest students is Jackson Veneklasen, 21, who’s been studying the lion dance for 13 years and now teaches the beginners’ class with his brother, Nolan, 19.

During the class, Veneklasen coaches two young boys in a new acrobatic move called a “split jump.” “The tail [dancer] grabs onto the hips of the head [dancer] and lifts him up to do a split kick in the air. It takes a little more strength and a little more balance,” Veneklasen says. 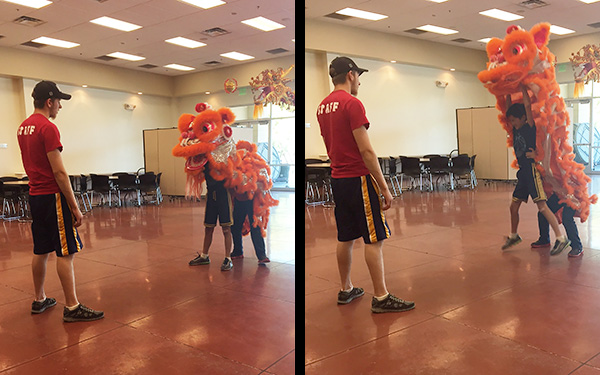 The young students give it five tries, lifting and jumping then landing and laughing. Veneklasen praises their efforts before letting them rest.

“This is all replicating competition level, jumping onto pillars. That’s what we’re working towards,” Veneklasen says.

Veneklasen was first introduced to the dance by his Taiwanese mother who wanted to foster cultural knowledge in her two sons. “When Kevin [Lau] came along, I got really interested it. The bond between me, my brother, and Kevin is really strong.”

In 2016, Lau and Jackson and Nolan Veneklasen received a Master-Apprentice Artist Award from the Southwest Folklife Alliance. The awards supports master artists in passing on traditional artforms to apprentices.

“They are both extremely dedicated to the craft,” Lau says. “They show such love for it and are always wanting to learn something new and push themselves farther.”

The award has allowed Lau to purchase more materials for his students and add props to their performances. The equipment for the lion dance is expensive, Lau says. The lion head alone can cost up to $650.

The award has also given Lau and the Veneklasens time to work on their craft, both its traditional elements and new additions.

All performances of the dance start and finish with performers offering three bows to “show respect to heaven, earth, and the ancestors,” Lau says.

Other moves require coordination between head and tail, so it appears the lion is scratching it self or chasing its tail. Another movement involves “eating” oranges and lettuce, which are considered lucky foods in China. The lion “eats” then tosses the food to the audience. If you are grazed by lettuce it means you have money coming your way, and if you catch an orange, it’s very good luck.

For New Year celebrations, people “feed the lion” by delivering red envelopes filled with money to the lion for good luck all year.

While these traditions are central, here is a lot of artistic license to innovate new narratives and acrobatics, Lau says.

Traditionally the lion stayed on the ground, all four feet on the floor. “But now the lion does a lot of jumping in the air, performing feats of balance. It can be dangerous. But also it’s gotten more creative,” Lau says.

This year, Lau and the Veneklasen brothers added a narrative element to the performance, giving the lion a mountain to cross—represented by a bench on stage—in order to get its food, traditional lettuce and oranges. Guarding the food was a snake, which the lion has to outsmart in order to eat. “It’s all told through dance,” Lau says.

Music is also an important part of the lion dance. Drums and cymbals are played live during performances. “The lion doesn’t move unless the music plays,” Lau says, adding that music helps to create the feelings of anticipation.

“The music will gets soft when lion is curious and looking at things, and then get loud when lion does big movements,” he said. 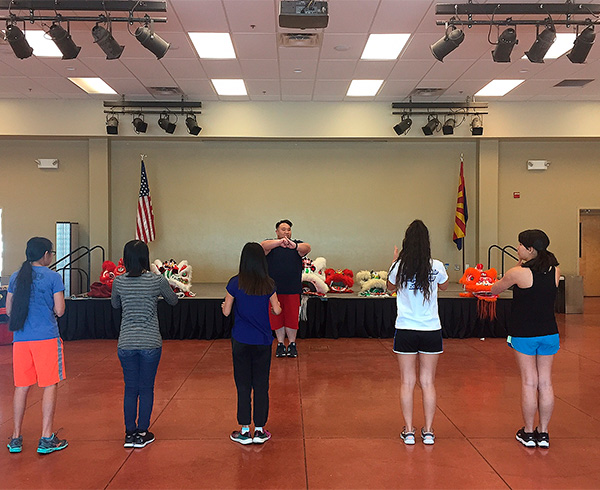 While upholding these traditions, Lau also understands the necessity of being flexible in order to ensure that the craft is carried on. “Lion dance used to be only passed down through families. But now we welcome everyone who wants to come and learn. You don’t have to be Chinese to learn lion dance. We want to pass the tradition on.”

Classes cost $25 per semester, which includes about 10 classes with the master Lau himself or one of his apprentices. That’s pretty much a bargain. And it might bring good luck, too.