It’s a late April afternoon on Tucson’s Southside and the sun glints off the Kelly green paint job of a 1939 Chevrolet. Alfred Teran, Jr. gets in and plugs his phone into a portable set of speakers. Barry White sings his 1974 “Can’t Get Enough of Your Love” and a pair of plush dice sways from the rearview mirror. As Teran, Jr. pulls away from the curb, the street seems thrust back in time (into the 1930s or 70s, it’s hard to say): an old car cruising up South 12th Ave., oldie tunes pouring out its windows. 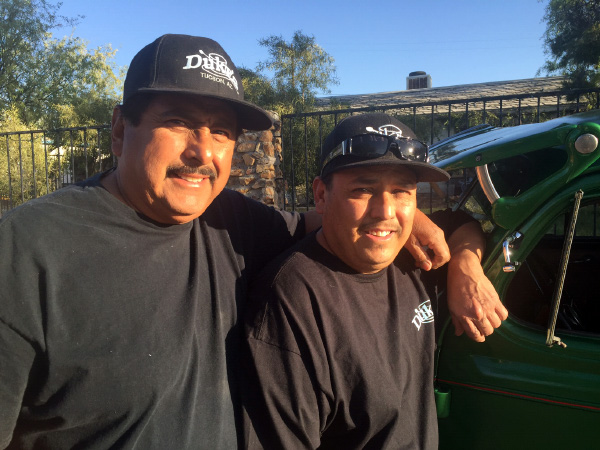 Teran, Jr. learned to build lowriders from his father, Alfred Teran, Sr. Both are members of the Tucson chapter of the Duke’s Car Club, a Los Angeles-based club with members as far away as Japan and Sweden.

Teran, Sr. founded the chapter in 1989 after seeing the club advertised in Lowrider Magazine. “To start a chapter, you had to be over 30, have a family and have a car anywhere between 1937 and 1954. I had those qualifications,” Teran, Sr. said.

Teran, Sr. wasn’t always into lowriders. In his late teens, he liked hotrods. “I started putting money into the engines but the car never looked nice. It was all motor.” Once he started racing, he said it got too expensive to keep fixing the motors, so he got a 1951 Chevrolet. “I built it, learned how to paint, be a mechanic, put wheels on it, started cruising in it,” he said.

Teran, Jr. watched his father fix up that first lowrider, and when he turned 16, his father gave the car to him, a custom Teran, Sr. followed for all five of his children.

Back in the day, Alfred Sr. and other Duke’s members would go cruising on the weekends up and down Sixth Avenue from Congress St. to Ajo. “We’d stop at Louie’s Tire Shop, hear oldies there, kick back and hit the street again another time. Sometimes we’d be up there until the sun came up,” Alfred Sr. said.

Shine, Luxury, and the Baroque

Fixing up a car for show is no small feat. First off, these days it’s challenging to find old cars, Teran, Sr. said. And when he does find them, they’re expensive.

But by the time he puts in the work, they’re objects of art worth up to ten times that. “You look at them at first and it’s rust bucket, but when you’re done it’s worth $30,000,” Teran, Sr. said. 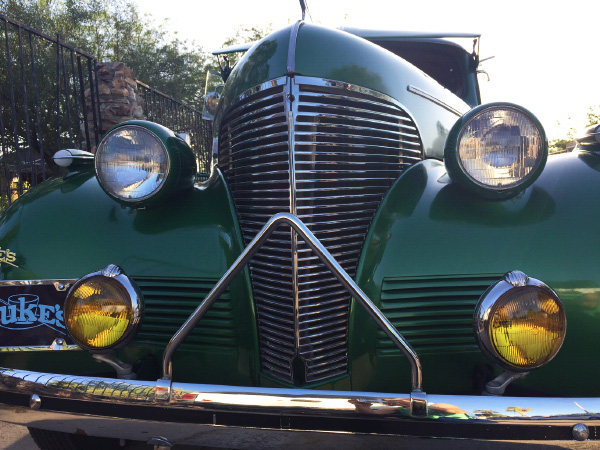 A lowrider is nothing if not crisply clean, polished, and lit up with shiny paint and chrome. Many cars are also decorated with murals that depict significant scenes, events, or places. On the side of Teran, Sr.’s Chevy Fleetmaster is a scene of a fictional old-time diner called “Al’s.”

Some lowriders are equipped with chrome chain steering wheels, sometimes no bigger than eight inches in diameter. One rumor said wheels were small like that so a handcuffed driver could still drive away. 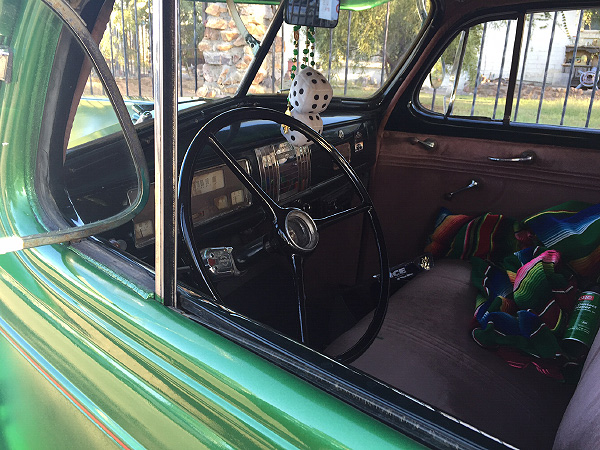 The Terans laughed at that. “We mostly use the original steering wheels now,” Teran, Jr. said. “The small ones aren’t really good for the old cars because they don’t have power steering. You really can’t turn too well with those chain wheels,” he said.

Then there’s the hydraulic system, which allows lowrider cars to clear speed bumps and railroad — and of course, to hop, jump, tilt, lean, and dance. Newer hydraulic systems use airbags, which are safer and cleaner, Teran, Sr. said. 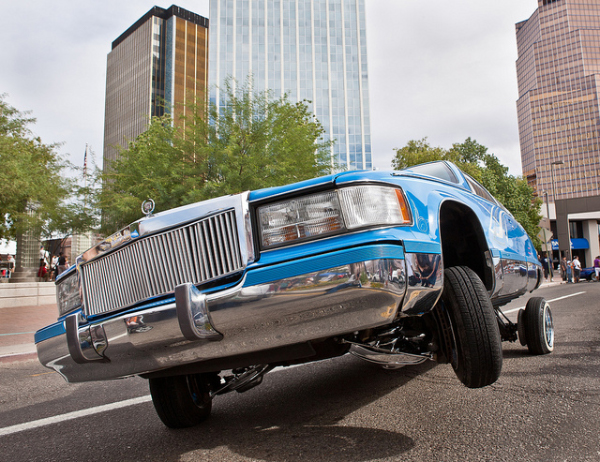 Folklorist Jim Griffith, who has been looking at lowriders for decades, talks often about the “baroque sensibility” of lowrider style. It’s a style that borrows from the Spanish colonial architecture and religious art of 18th century Mexico, examples of which can be seen at the Mission San Xavier del Bac, just south of Tucson, he said.

“The richness of color, the richness of material, implied motions in the way the cars are cocked up on one side, the plethora of detail and the general sense that more is better,” Griffith said.

In the baroque church interior, he said, you also often see faux stone and tile work painted on the walls to look real. “You see same sort of visual puns in lowriders. It’s playing with reality.”

From Stylish Horses to Slow Cars

Low-riding came into fashion in U.S. Chicano culture after World War II. A reaction to the growing popularity of speed and efficiency, low-riding emphasized style over speed, Griffith said.

Teran, Sr. confirms this. “We like the low riders, down low. Basically we don’t go fast in them, we just cruise and hear oldie music and turn heads.”

But lowriders also borrowed from earlier traditions of transport, mobility, and style. Before there was the lowrider, there was the horse.

“The cowboys would dress up their horses, comb their tails, put ribbons on the tails, ribbons on the horses neck. Then they’d get dressed put the cowboy boots on and go see their girlfriends,” Teran, Sr. said. “We didn’t have horses we had cars. So you’d fix your car, paint it real nice and you go pick up your girlfriend and off you went.”

Griffith tells a story of when this historical connection became clear to him. At a fiesta near the Tucson Museum of Art a lowrider show took up one half of a large parking lot. A truck on display was mounted on two suspension systems such that its body and its bed could move up and down separately and in different ways.

“A man in black shoes, black trousers, black hat, shades, probably a white shirt, was standing there dancing his truck in time to highly rhythmic disco music coming from the sound system inside the truck,” Griffith said.

On the other side of parking lot, “A mariachi was playing while a guy on groomed palomino horse was dancing in time to the music, doing floreo de reata, flowery rope tricks,” Griffith said. “I looked at the truck and I looked at the horse and I realized, same stuff, same culture, same approach, two generations, urban and rural.”

Shifting Reputations
For a time lowriders were associated with criminal activity, in part due to representations in film and media, but also due to racial stereotyping of Chicano culture, not unlike that which led to the Zoot Suit Riots of the early 1940s.

“A lot of people see us and think we’re gangsters but we’re not,” Teran, Sr. said.

In fact the Duke’s are known for their community service. If someone in their group falls ill or one of their family members gets cancer, they raise money to support them through raffles. “That’s how it works. You help others to help yourself,” Teran, Sr. said.

The Duke’s also do annual turkey runs at Christmastime and have gifted bicycles to young people in Barrio Hollywood with proceeds from raffles.

The service work has given them a good reputation with the Tucson Police Department. “The more you do for the community, you come out on the news. The police now see us and know us and leave us alone when we go around cruising.”

These days the Dukes mostly display their lowriders at car shows and special events, including the annual Tucson Meet Yourself Folklife Festival. 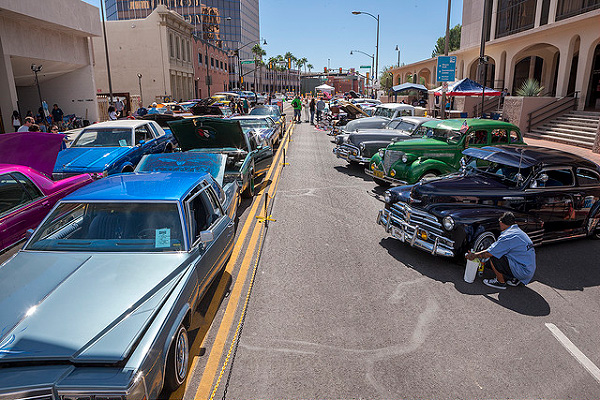 And while they cruise less, “We still like to stroll in together,” Teran, Jr. said.

“A lot of people turn their head to check us going by. Mostly older folks that say, ‘I remember when I was there.’ Especially the guys who came out of the service and used to wear zoot suits back in the day.”

The Dukes also mentor young people. Young kids start with lowrider bikes, learning to paint them and put them together. “So when they’re older and want a car they get rid of the bikes and move up,” Alfred Sr. said. 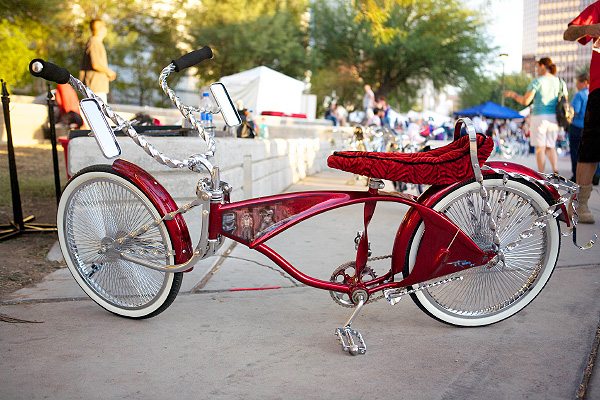 Some kids also go to Alfred Sr.’s house to learn how to paint cars. “I always say, ‘If you can paint a car and do body work you’ll never go hungry. That’s what I was taught. It keeps you out of trouble too.”

Their hope is to pass on the skills needed for working with cars and an appreciation for lowrider culture, Teran, Sr. said.

“Nowadays the younger kids like big trucks, they like to be up high,” Teran, Sr. said. “But in my days we liked it low. Low and slow.”