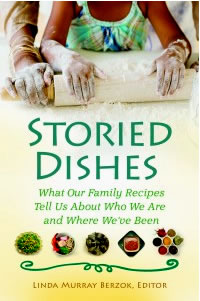 Cuisine is part of culture, family tradition, history and… yes… learning. Linda Berzok, food scholar and editor of the 2010 anthology, Storied Dishes: What Our Family Recipes Tell Us About Who We Are and Where We’ve Been (Praeger, 2010), agrees. Her mother’s culinary life and passion were at the heart of her anthology’s inception, her career pursuits and her personal love of food travel. She shares what inspires her about food and how local cuisine provides a perspective on culture.

B: As a food scholar, will you tell us how food is both a part of folklife as well as academic pursuit? What can the study of food teach us?
L: If we think of folklife as traditional aspects of everyday life passed on from one generation to another, then academic food studies sheds light on those activities and tells us who people are, where they come from, what they are connected to and what makes them unique. Often, we find that other people’s customs are similar to our own.

B: From the Storied Dishes book we see food is cherished in your own folklife. Will you give us an anecdote about how your mother’s recipes imparted learning for you?
L: I was amazed that I could read my mother’s recipe card collection as a biography of her life. It covered 40 years and included Swedish recipes from her mother, Depression-era recipes, the assemblage of convenience foods introduced after World War II, and even a foray into Chinese cooking in the ‘80s during the ethnic craze. That kind of progression is typical of many first-generation American women, who are trying to break with their pasts and establish their own culinary identities in this country.

How my mother’s recipes imparted learning — I was able to see both how my mother acknowledged her ethnic roots and moved away from them. For example, Swedish meatballs, a staple of the traditional Swedish smorgasbord table, were relegated by my mother to cocktail party hors d’oeuvres. They became a party food rather than part of the dinner meal.

Surprising learning experience about food from the book — I was really taken aback to discover how hard it is for me to make my mother’s Swedish spritz cookies. First, I bought a vintage cookie press on Ebay like what she would have used.   Then I ordered a slick, modern version. Either way, I could barely force the dough through the opening. Even my husband, wearing garden gloves so he could turn the crank could barely squeeze a few out.

I was also surprised to learn about cuisines I don’t really don’t know like Indian. The story about making naan in a tandoor oven is utterly foreign to me as is the cooking of laddu, fried chick pea flour beads, a celebration food that appears in another story. The tradition as well as every implement mentioned are things I do not know.

B: Food tools are important to various cultures. Will you mention a few tools that you have come across in your teaching or writing that are especially meaningful to you, and to how they reflect a celebration of culture and folklife?
L: Unfortunately, I have none of my mother’s or grandmother’s tools. I do use a couple of traditional Chinese tools. One is the dumpling steamer which I use for tamales, Middle Eastern stuffed grape leaves and to steam vegetables. I use the dumpling steamer (always lined with lettuce leaves to prevent sticking) also for dumplings, of course! The other is the so-called spider, a wire web attached a long bamboo handle, that I use to safely remove food from hot oil or water like broccoli florets, for example, or totopos, tortilla chips. These tools have a long history. The spider is very useful to extract wontons and other foods from a wok, which is a very fuel efficient method of cooking.

B: Will you give us a personal story of exploring a local Mexican market or factory or cooking class and how this enriches your life in the southwest?
L: When I was recently in Oaxaca, I took a cooking class in a small Indian town. The instructor was Zapotec, a descendant of one of the original cultures in this area who created the monumental mountaintop site of Monte Alban (ca. 300 AD). We used the ancient grinding tools manos and metates, which date from at least 500 BC among the Maya to make both mole and to grind softened rice for horchata. This technology apparently migrated or appeared simultaneously in the Southwest Indian cultures where it was almost universally used for grinding raw corn into meal and flour. So a culinary class in a town on the outskirts of Oaxaca offers insight into Southwestern traditions.

B: In broad terms now, will you explain about how food helps us approach a new culture when we travel?
L: Food provides an experiential entree into the culture. The two are so intertwined, they are hard to separate. Before visiting a new culture, I read as much as I can about the food, highly credible books like Diana Kennedy’s tome Oaxaca al Gusto, Phia Sing’s Traditional Recipes of Laos, (edited by food historian Alan Davidson), and Kitty Morse’s Cooking at the Kasbah for Morocco.

Based on my reading, I knew in Luang Prabang, Laos to order dried river weeds as an appetizer, and expect a lot of river fish steamed in banana leaves, always served with sticky (glutinous) rice. Among other things, that informs me about the central role the Mekong has always played in these people’s lives.

I visit local markets especially away from the city center to get as close as possible to the folklife. Outside Oaxaca at the Tlacolula market, one of the oldest continuous markets in Mesoamerica, live turkeys, geese and chickens were wrapped and tucked under arms, destined for Sunday afternoon comida. We ate breakfast there at a long table with wonderfully welcoming local people, and gained a sense of community and sharing, important elements of food culture.

Finally, be sure to take a cooking class with a native, not an American who has set up shop there. In Morocco, I had a class with a head-scarfed Muslim woman chef who encouraged us to ask her about any aspect of the culture so we fired away about the position of women in the society, her marriage, her mother-in-law. Had I not done that, I would have known so little about the culture. One of the many culinary things I learned is that most Moroccan women now reserve tagines for serving, and use pressure cookers for actual cooking! Our instructor had received three pressure cookers as wedding gifts! That’s some culinary transformation and says a lot about cultural change.