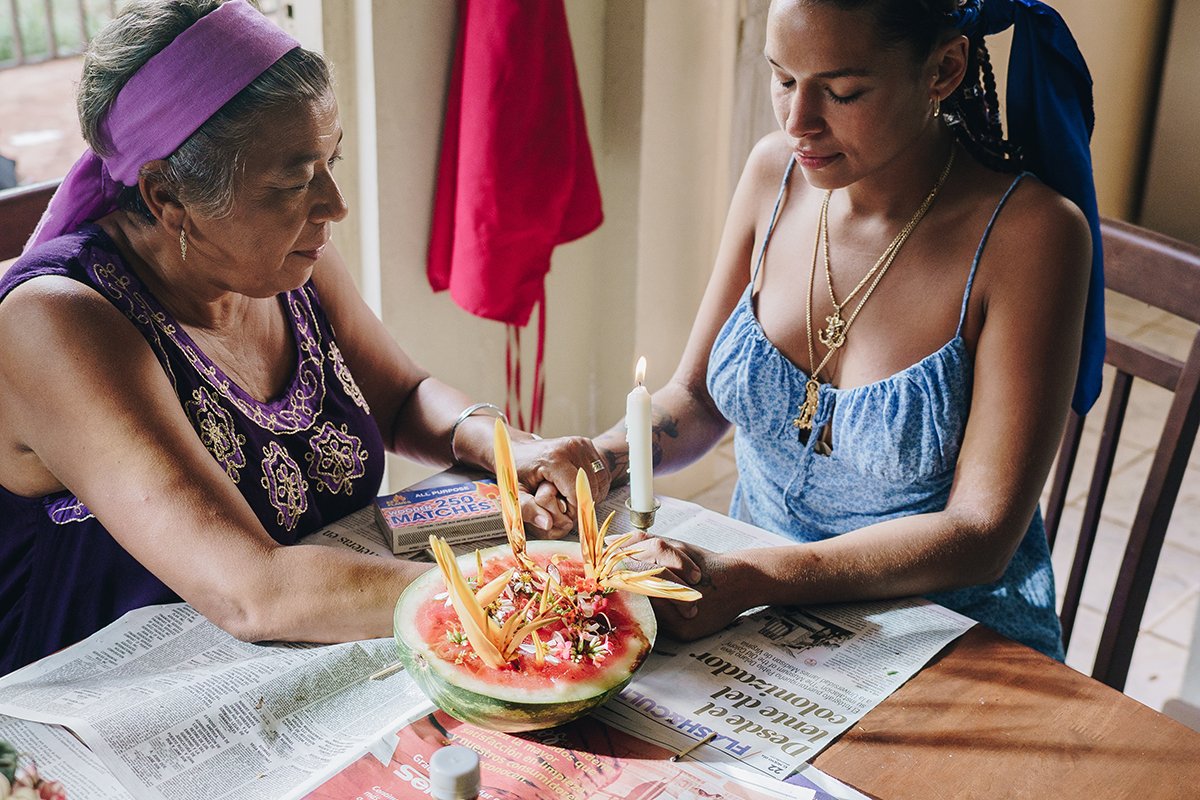 Alexis is eight, and I am nine: Lela instructs us to gather flowers from the garden to place into vessels of rain water on the veranda, ingredients for a ritual bath.

We are twelve and thirteen: Lela rubs honey and mint in our hair. It is midnight and we are on the beach in San Juan. She leads us into the ocean for a baptism.

We are fifteen and sixteen: Lela calls us to her altar after a startling phone call. Someone she knows has gone missing. We light candles and she writes a name onto a piece of paper and sets it on the altar to help the person find their way home.

At the end of our summer visits, Lela places incense into a sartén then asks Alexis and me to stand still, our arms and legs outstretched. She circles our bodies with smoke, a blessing, before we board our airplanes home to Miami and New York.

Spirit healing, kitchen-table remedios, and community-care rituals are my family’s folklife. My abuela Lela—a healer, a psychic, and our family’s matriarch—modeled for us how to be care-giving community members. At age 92, she is still our teacher.

When my prima Alexis grew up, she became a filmmaker, casting healing narratives that uplift our cultural heritage as medicine and shine light on our people, those still living in Puerto Rico and those, like me, who live in the mainland US. I became a folklorist, holding folk cultural knowledge as a tool for social change, using remedios for community wellness. We are privileged to carry our traditions forward in creative ways.

Memories of childhood are full of wisdom and beauty. Can you see it? Children’s hands rubbing bright orange birds of paradise into a paste, the beach at midnight under a full moon, honey dripping down foreheads, the home altar alight with candles and rings of smoke encircling our shoulders lodging in our hair. We are cooking, sitting, sipping, bathing, crying and laughing. Everyday—any day—actions: magical, critical, cinematic.

Imagine my delight when last fall, Alexis shared that she was planning to make a short film at our family’s home in Naranjito, Puerto Rico. The film would be about a girl living in Los Angeles, who returns to Puerto Rico after her grandfather passes. There on the island, she receives a calling from Yemaya, the Goddess of the Sea. Alexis asked me to imagine and then script the moment when the grandmother character, named Lela, passes on a ritual to her granddaughter, Yanise. This ritual, the making of an offering for Yemaya, would be a transformational moment for Yanise. It would also be an offering for audiences—a reminder to engage our traditional knowledge during times of struggle.

While studying folklore throughout college and graduate school, I interviewed my grandmother. I have drawers of cassettes and hard drives filled with recordings of her stories about her encounters with spirits and remedies that helped her heal our peoples’ souls. On a personal level, it has been a tremendous responsibility to hold these narratives, these lessons in how to keep our people well. Lela is a masterful storyteller, the recordings are dynamic and full of emotion. Over the years I have made some attempts to analyze the stories, considering the art of her stories as vessels for cultural insights. The effort, though, has felt inadequate and inaccurate. What care would cultural insights provide? How to name the feeling in your heart when your own grandmother reveals to you her supernatural powers and shows you how to wield your own? I am lucky to have spent so long in deep meditation around her words, her spells, her accomplishments, and her know-how. I carry the wisdom with me and share her stories with my people. This is also the way of folklorists.

To write an accurate ritual for Yemaya for the fictional Lela and her granddaughter Yanise, I brought in memory of what I’d learned from my real abuela. Seven is Yemaya’s ritual number. We honor her with ritual items in groups of seven. To start my writing assignment, I took seven days to meditate on La Diosa del Mar. I read books, blogs, scoured the internet for photos of offerings, altars, and videos of her devotees honoring her in many ways. I made a Pinterest board and considered how altars and offerings tell stories about our gods and about the people who count on them. I listened to ritual music that honors Yemaya. Each day, I spoke to her through my home altar. I drank watermelon juice and ate roast duck, foods associated with Yemaya. I wore her colors—silver and blue—and filled my home with flowers.

On the seventh day, I called my daughter, Rocío, into the kitchen and we cut open a watermelon. We talked about what I had learned from la diosa, about how Yemaya was the mother of all, and that the stories tell us that she chose to make a world, an environment that changes. We talked about how change is an important building block for understanding our role (and the role of our ancestors) in the world.

“What does change mean to you,” I asked Rocío.

“I don’t know? That things can be different,” she replied.

Rocío adorned the fruit with pennies and flowers and together we drizzled molasses over our offering.

On the seventh day I was full of peace and joy, experiencing deep connection to an ancestral practice. In that state, I sat to write the ritual scene for Daughter of the Sea.

Many of us have stories about the time our traditions saved our lives. A time the beating of drums called our names and reminded us of where we came from, a time when remedies we grew up with nursed us back to health, a time when the spiritual practices of our ancestors became poignant, relevant, life-saving. As a collector of stories about tradition as salvation, I’ve observed the power of these experiences and the retelling of them to make change in people’s lives, to provoke, provide or promote transformation. Tradition often provides an intervention during a time of need.

But what happens when those traditions get broken or diluted? I’ve worried that the kitchen-table remedies and rituals that I learned growing up near my abuela won’t adequately reach my kids. Since we don’t live on the island or in the same neighborhood, we are disconnected from our knowledge bearers.

Maybe this is where film comes in. In Daughter of the Sea, the film my cousin and I made, we were able to show a life-changing moment for the character of Yanise, by writing into the script and playing out on the set a life-like ritual offering to Yemaya. It was a ritual involving a watermelon, not unlike the one I shared with my daughter. In the story, the ritual gives Yanise an anchor to heritage and to family. On the screen, we witness how tradition saves her.

In creating this scene, I knew it had to communicate so much—for both the characters and the audiences—about the goddess, about the role of heritage in our future, about love. So the monologue I wrote for Lela—that Migdalia Rosario then performed on set—evoked a lifetime of lessons from my own abuela. In the editing room, however, we had the insight that our cultural knowledge came to us in fragments of loving moments accumulated over time. The final cut delivered a fragment, textures of folklife, a path to learning. The feedback we hear the most from audiences is that they want more. That feels accurate.

I feel committed to continuing this way of “thinking like a folklorist”—embodying the rituals I learned from my grandmother, sharing them with my children, and writing them into larger stories to be read or viewed on screen by others. Our traditions need avenues for expression and for change.

When I was a little girl, my abuela owned a botánica. I watched her use her folk wisdom to heal our community and build a better world. Alexis and I named our film production company Botánica Pictures. We have work to do in the world, we have our own connections to tradition to maintain, and writing for film has become a mechanism to move our folklife forward.

Cover photo: Migdalia Rosario (Lela) and Princess Nokia (Yanise) “ignite the connection” on the set of Daughter of the Sea. Photo by Mari Blanca Robles López

Selina Morales is an inheritor of a life-sustaining tradition of Puerto Rican folk healing and spirit work. For four decades, she has studied at the knee of her grandmother, a spirit medium and healer. She offers her inheritance to her family and community as critical tools for the pursuit of social justice. Selina is a folklorist, a writer and a film maker. She is also a mother, and a great cook. For nearly a decade, Selina worked through the Philadelphia Folklore Project, supporting artists in using their folk traditions for social change. She is a frequent collaborator of the Southwest Folklife Alliance, a proud member of the board of the Folk Arts Cultural Treasures School in Philadelphia’s Chinatown and of the Advisory Council of the Smithsonian Center for Folklife and Cultural Heritage. She is a founding partner of Botánica Pictures and is an Executive Producer for Daughter of the Sea (2022).