On Jewish Prayer: A Response to Blood and Soil!

Several months before I shoveled dirt onto Rabbi Zalman Schachter-Shalomi’s little body, wrapped in only his iconic rainbow tallis far down in the earth of his grave, I heard him in my mind tell me how to pray. I felt weak, irritated, and disappointed that I had broken my fast the night before, and yet still could not concentrate on anything but eating, eating everything I had ever eaten before. On this fourth day on a long, gradual hill inside Death Valley of the Mojave Desert, I was fasting alone, to find out if it was right for me to marry Y., and how I might understand and then separate myself from several generations of abuse and hospital incarceration. Standing next to a creosote bush, I chastised myself, How can I speak to God when I am so hungry? Reb Zalman, whom I had never met, trailed my inner words, in a soft but rapid, Tell God you are hungry.

I guess I have made a life of prayer rather than practice. I move so frequently that I cannot but be cleaned continuously by what makes night in a grandfather. I learned to pray in an Orthodox Jewish school, unlike my parents who never really knew how–they who decisively sent me there. Prayer in their life was an annual and prescribed rite for repeating translated verses, in unison, back. Back to the rabbi, robed like a priest. Back to the organ, with feet on wood surrounded by stone, in the Appalachian foothills of Schulykill County, Pennsylvania. In the shadow of a century-old immigrant-Jewish community nearly completely vacated.

Against a more rational judgment, the prayer I learned I memorized through repetition, as music, among but not because of other children. I don’t remember knowing what the prayers prayed literally. But I carried them at the precipice between my internal life and the strength of my lips, which in this tradition, I believe was the essential purpose.

In school, these prayers were sung midday, after eating, in the gymnasium, which was also the cafeteria and theater. If you stood facing our backs and turned left from where we prayed, you would walk into a wash room, circular tub, green tile walls, pails, fountains, for hand washing before eating, where we would have filed through, before, toward you entering, and then pass you, to stand in a line and pray over nauseating bits of bread we would pretend to eat then drop on the floor. I am likewise taking you into the circle of not what I know but what I memorized and so sung, with enough freedom in the cracks for your tiny subversions. I will also leave you there, the two of us nauseous, uneaten.

Once, I chanted all of the prayers for a Shabbat evening, before eating, for my parents and younger brother (my older brother was in New Jersey, and did not think he was Jewish because we did not think he was Jewish, which is a problem (of excommunication)). When I looked up from my siddur (prayer book) my mother was crying. Because I had prayer. I remember I felt I was taking too long, or rather praying took too long through me, before I saw her face. Why does it mean for the mother to cry? Why to have prayer does it mean that for her? 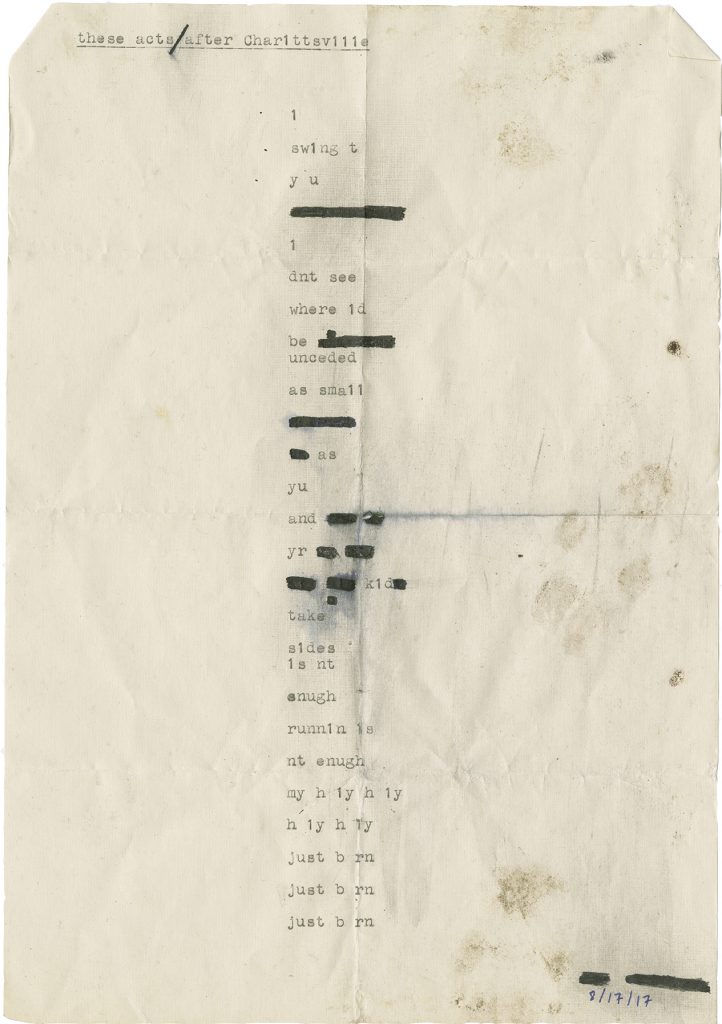 Because I became viscerally prepared. Repeating prayer back to the rabbi has its roots too.

Prayer is public. Prayer is more. When I stood at the Western Wall, a fragment, my uncle, the husband of my mother’s sister, stood with me and said, “This is the closest to God you will ever get,” and I disagree/d.

A scholar wrote to the Jewish History Museum of Tucson, where I work, “Assimilation by definition is the end of Jewish identity.” Prayer as I inherited it through Orthodox Judaism is music, daily reiteration, at once internal and extroverted, collective and private, ancestral yet capable of handling urgency.

The holiest place I have ever been is the upstairs unit of my maternal grandfather’s store, where he was raised, and below which, after his parents left (and left behind everything: dishes, instant coffee, baby carriage, record player) he worked through both my mother’s childhood and mine. I spent weeks up there writing, and found prayer books, my grandfather and his brothers’ names graffitied on walls and posts, mezuzahs still planted on door posts. I keep two of the prayer books on my desk and one in the trunk of our car.

Before my grandfather sold the building and business, I dreamed several times of it leaving the family, and therein dreams unleashed grief that wailed beyond my own capacity as an individual. Many, I think, were mourning inside me, so that I woke each time emotionally exhausted (in contradistinction to my grandfather, to whom selling was a necessary, tiring, and well-deserved act). I think I became there, in the store, the echo of an intersection. My mark in the empty, warped rooms, scanning stale ritual objects, writing in the cold drafts where my family had lived and prayed, bound my work as a poet to the tradition of tradition itself; the tradition transcendent of other purposes, reasons, and relationships I might personally forge as a writer and working person. I think now, in this acute hour, prayer is the intersection, the means by which my ancestors recognize my labor. Poetry, thence, became shared responsibility.

Held just barely intact enough for my adult self to recognize—the space of the store now sold, the objects, my grandfather’s 85-year-old night—this family line is the only one that adhered to orthodox traditions, the traditions in which I was learned. Yet, this orthodoxy was not brought from vast Russia but rather introduced by my great grandfather in mourning the death of his father, an immigrant blacksmith, in 1932. As such, it was death that prompted a familial revolution in observance of tradition. But it was also death that ended it. When my great grandfather himself died, his son—my grandfather—prayed kaddish every morning for one year, as the Jewish mourning practices warrant, and then let go of what he deemed to be the grips of a life particular to his father’s journey, but not his own.

Prayer in my tradition is bound to what has been disappeared. I find myself implicated and need it.

Prayer, as I heard it through Reb Zalman on the hill in Death Valley, is a translation of the roots of the dead into an argument that sustains respect for life. 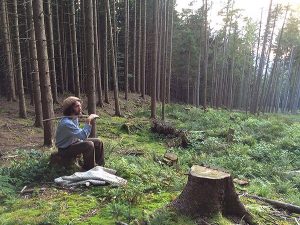 Robert Yerachmiel Sniderman is a consultant for the Jewish History Museum in Tucson, where he directs the museum’s education program and has helped curate temporary and permanent pieces on human rights, Jewish identity, and local histories that complicate and challenge dominant narratives. A poet, installation and theater artist, in 2018, he will be a DAAD Research Fellow at the Institute for Art in Context in Berlin, writing a public performance for the Weißensee Jewish Cemetery, the largest intact Jewish cemetery in Europe. New poems and visual work are forthcoming in The Offing and University of Toronto Journal of Jewish Thought.