On a searing hot morning in June, the front door of the Primera Iglesia Bautista/First Mexican Baptist Church on South Stone Avenue in Tucson is wide open. Women and children are carting cardboard robots, board games, and unused packages of paper plates and napkins from the building to cars and minivans parked outside.

It’s the last day of Vacation Bible School and all the games and activities along with $299, raised in pennies by the children, are on their way to a church in Nogales, said Veronica Salazar, one of the church’s members.

This is the kind of generosity that makes the church feel like home, says Veronica. She’s been coming to the church for decades. It’s where, 26 years ago, she met her husband, Alonso Salazar, now the church’s pastor. 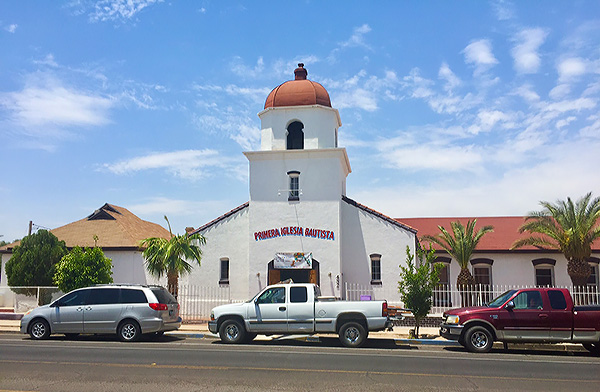 If you live in Tucson, chances are you’ve seen the big white building with its large dome tower at 482 South Stone, near downtown Tucson. Its name, “Primera Iglesia Bautista,” is painted over the wooden front door in neat, red and blue letters.

Built in 1933 for $9,000, the church originally counted 242 seats and followed the “Spanish style.” “…In many ways it resembles the old missions in small Mexican towns,” according to an announcement in the Tucson Daily Citizen that year.

Architecturally, the building would be categorized as California Mission Revival style, said Tucson architect Bob Vint, adding that, curiously, its style looks more Catholic than Protestant. “But it’s also a vernacular response, expressing a shared idea of what a church should be. It’s built in the tradition of a nave-style church, which goes back to earliest Christianity,” Vint said.

The church’s first pastor was Rev. Alberto Morales, who came to Tucson in 1927 at age 22, recruited from Los Angeles by a small congregation of Mexican Baptists then holding services on 641 S. Meyer (Tucson Citizen, Dec. 3, 1983, “It’s been half a century’s lonely struggle for ‘la fe Bautista’).

Baptists were among first Protestants to extend missionary work into Mexico and had been preaching the gospel in border states like Texas and California since the second half of the 19th century. Himself raised Catholic, Morales became Baptist at 17, when he “found the Baptist’s biblically-oriented worship service more inspiring,” according to the Citizen.

When he got to Tucson “…Morales hit the streets with his Bible preaching to whomever wanted to hear. He also preached to those who didn’t, and he says he was arrested ore than once for turning his loudspeakers up too loud.”

Though it was well before his time, church member David Pacheco remembered hearing about that how the first pastor would put a loudspeaker on the dome atop the church to broadcast sermons into the street and “share the good news of Jesus Christ,” he said.

Apparently the Catholic Church down the street complained.

Rev. Morales preached on South Stone for over 20 years, then moved to the Gethsemane Mexican Baptist Church, 744 E. 37th St.

Today’s pastor, Alonso Salazar, greets the congregation warmly then leads them in a hymn, its lyrics projected via YouTube onto the wall above him. One morning in August, some 50 or so congregants sang along, including young girls with ribbons in their hair.

Salazar’s sermon (delivered inside the church) addressed lessons from Ecclesiastes, with messages on leading a healthy life, using careful words, and taking the risk to love. Speaking primarily in Spanish, with a few English words peppered in, Salazar told stories from his own life and marriage to help reinforce the gospel. 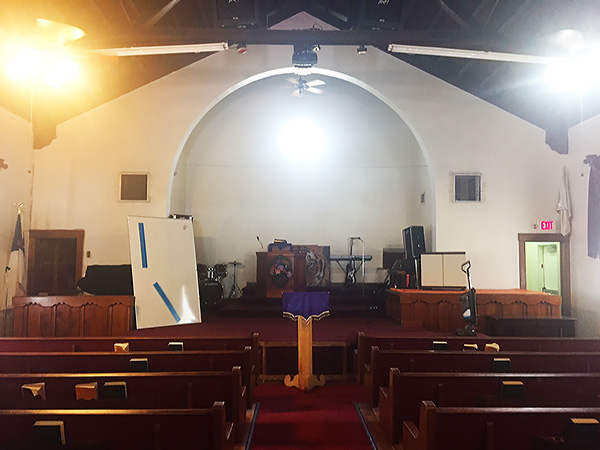 Being in church “feels like being in Mexico,” said Benjamin Padilla, 77, a church member who was born in Nacozari, Sonora and came to Tucson at age 20.

He and his wife Olga, 75, originally from Janos, Chihuahua, were married in the church in 1964.

“I weighed 85 pounds, wore a $10 dress,” Olga said. “The pastor’s wife, Señora Ayala, made dinner for us in the church hall. Tostadas y tacos. I think there were maybe 12 people there. Someone gave us a cactus.”

In the mid-1970s the Padillas relocated to Phoenix and recently returned to Tucson and to Primera Iglesia Bautista.

“We love this church,” Olga said, remembering earlier days when she would participate in church activities such as skating, bowling, and singing at Easter time with members of Catalina Baptist Church.

Today, the church participates in the annual downtown Tucson Festival of Lights, lending out bathrooms and offering refreshments to parade-goers. Its members also raise money for organizations such as the Tucson Gospel Rescue Mission, said Pacheco.

Pacheco started coming to the church at age three when his parents came to Tucson from Chihuahua, Mexico.“It’s like a family here. We start as strangers then we love each other. I see [Ben and Olga] as my parents,” he said. 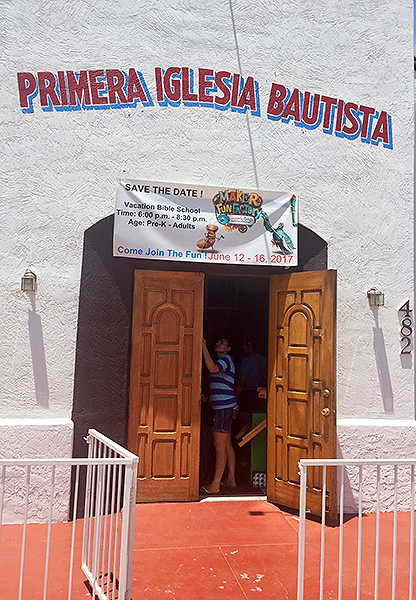 While the church has no formal stance on immigration, Pacheco said, “We are open for everyone. Our main message is salvation through Jesus Christ.”

Benjamin agreed. “The Bible says to disdain someone is a sin. We welcome all.”