Indigenous Stories, One Podcast at a Time

Tina Vavages-Andrew isn’t afraid to laugh out loud. She does it readily in conversation. And at least once a month she laughs into a microphone. She’s the host of a monthly podcast—two of them actually—aiming to make indigenous voices (and laughter) more audible in the Southwest and beyond.

Podcasting, Vavages-Andrew believes, is a good platform for sharing ideas, perspectives, and stories of grassroots efforts within the indigenous communities. “People are doing amazing things literally impacting and changing the community, whether in Tucson or on the Nation,” she said.

People like Gabriella Cazares-Kelly, a member of the Tohono O’odham Nation, who helped organize “Native Women for Equality,” a group of over 200 indigenous women who attended the Women’s March on Washington in January 2016.

Or Joe Camarillo, part Apache and part Mexican, who works as a sales manager at the famous Old Tucson film studios, which hired O’odham people in the late 1930s to build adobe buildings for movie sets.

Or Gabriel Ayala, a classical guitarist and music teacher from the Yoeme/Pascua Yaqui Tribe, who Vavages-Andrew met on a trip to Standing Rock in November 2016.

She’s interviewed all of them, plus over 15 other indigenous community members since starting to podcast.

Vavages-Andrew grew up in the villages of Ghaka and Ak-Chin on the Tohono O’odham reservation. She left home when she was 15 to pursue education elsewhere, then returned to Tucson after high school. “At age 25 I realized I wasn’t doing anything with my life. So went to Sells and enrolled in community college. I really engaged myself, connected with my culture and saw the importance of carrying on traditions,” she said.

She said she appreciates the work non-natives do to share indigenous stories, but she believes there is dearth of indigenous perspectives in the media. “The more I started to open my eyes and see how indigenous people, especially Tohono O’odham were represented, the more I knew we needed to tell our own stories. I asked myself, How can I change that? How can I be that voice?” 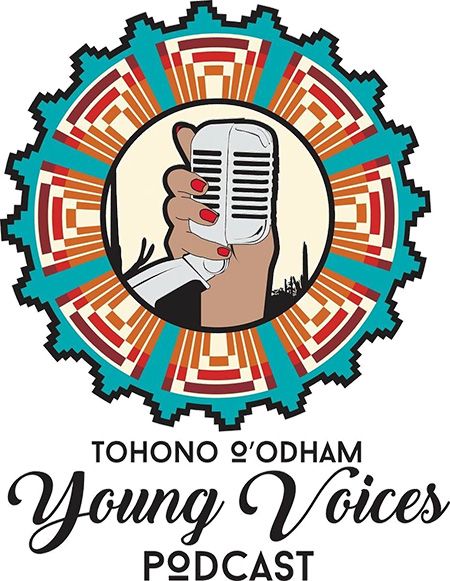 After being interviewed for a program at 91.3, KXCI, Tucson’s community radio station, Vavages-Andrew was inspired to start her own podcast, Tohono O’odham Young Voices, hosted by the web site, Spreaker.

That podcast is open to everyone, but primarily reaches indigenous listeners. She produces an edition about once a month, and considers it the more “uncensored” of her two programs. “The conversations are longer usually, and it’s more mobile, because I travel to interviews with gear,” she said.

In a two-part episode on “The Culture of Waila,” Vavages-Andrew shares live music and interviews from the Waila Contest held by University of Arizona’s Tohono O’odham Student Association, as well as an extensive history of the genre. In “We belong to the land: Life in the borderlands,” she covers the impact of current issues along the U.S.-Mexico border on the Tohono O’odham. The episode includes discussions with Tohono O’odham tribal member Josh Garcia about the Integrated Fixed Towers, proposed surveillance and communication towers, which would be placed on tribal land to monitor illegal immigration, and journalist Todd Miller, about his books on border policies and impacts.

For inspiration Vavages-Andrew listens to other podcasts about indigenous politics. She said her husband has turned her on to funny podcasts about wrestling and rap. She even wrangled him into a recent episode of Young Voices to discuss wrestling topics. 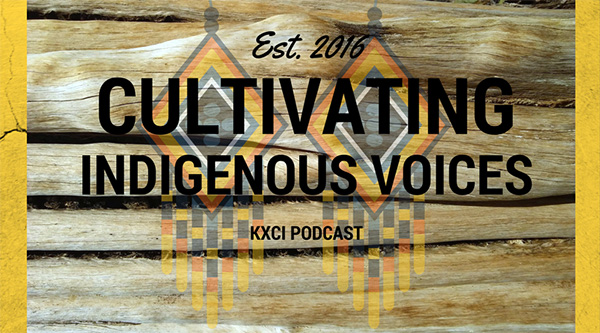 Once she got the hang of the medium, she approached KXCI to host Cultivating Indigenous Voices, a 30-minute program focusing on indigenous people’s lives and contributions in Tucson.

The podcasts are archived on the KXCI web site and occasionally air on the radio.

Her main goal is for guests to share their connection to the native community and culture. “Whether that’s interviewing someone about the bahidaj (saguaro fruit harvest) or someone like Gabriela Ayala about the importance of music in our lives as tribal people,” she said.

Vavages-Andrew says she works from a script but gives herself leeway to veer from it. She also sends interviewees questions ahead of time. “It makes them more comfortable and confident,” she said.

Being a tribal member herself also helps. “They place trust in me that I’m going to share the real story.”

Amanda Shauger, community engagement director at KXCI, said the station was honored that Vavages-Andrew brought her work there. “With a long form interview format, listeners can really appreciate the nuances of the conversation,” Shauger said. “Tina immediately fosters an easy, friendly rapport with her guests. When you listen to Tina and her guests, you feel like you are sitting at the table with them as a part of the conversation. Every time I listen, I know I learn something new about our community. She makes radio/podcasts sound effortless.”

Part of her training at KXCI involved helping Warren and Joseph Garcia, brothers that host a program called “Rez Radio” at the station every Friday. She answered phones for them, recording shout-outs and dedications and shadowed Joseph on the soundboard. “I’m very appreciative of them and their help in giving me the opportunity to be more hands on in the studio,” she said.

Now Vavages-Andrew has her own intern, Carmen Otero, a Mexican American student who helps her in the studio and with interviews.

She said the podcast at KXCI has helped her expand her audience exponentially. “I wanted to spread awareness about the history of the Tohono O’odham. We are here. We’ve always been here. And people need to recognize that.”

What has surprised Vavages-Andrew is the appreciation and support her interviewees and listeners express. “I didn’t have any expectation of that,” she says. “It’s been humbling to know that the community sees and acknowledges this work. People say thank you for being that voice.”