Stephanie Bermudez is no stranger to reinvention. The 35-year-old, Nogales, AZ-born entrepreneur has created and commanded not only her own life but also dozens of events and start-up endeavors. She is now working to re-envision the border town as a place of collaboration, innovation, and entrepreneurship. 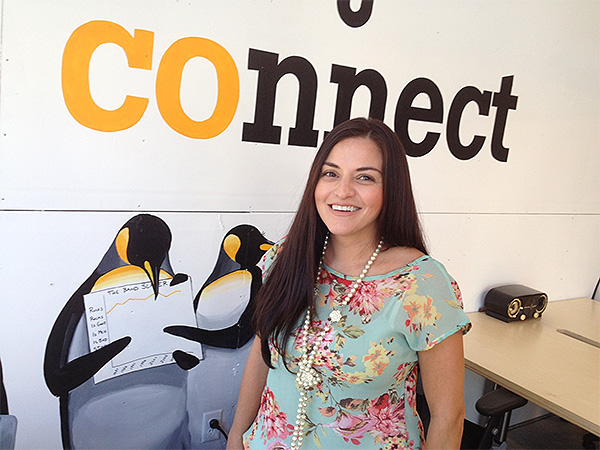 Last fall, Bermudez helped organize a block party in along Nogales’ main street, Morley Avenue. Her goal was to bring generations together to share stories and experiences. She collaborated with only Nogales locals. For example, Precious Dreams Photography hung a photo exhibit of historic photos along Moreley Avenue to ignite conversations. “Pulling a community together that is old and new is like bringing planets together,” she said.

Bermudez has invested in herself and is a member of leadership c-suite at Lead Local, an organization that connects local business and individuals with organizational consulting and leadership training. She is currently creating a podcast about leadership, entrepreneurship and innovation along the border region, featuring interviews with 20 “changemakers,” 10 from Arizona and 10 from Sonora.

Bermudez is also looking to open up an incubator space to host an academy of intergenerational border leaders taking innovative approaches to industry. “It’s about breaking down barriers,” she said. “Both Nogaleses want to create new businesses here and develop new mindsets.”

Bermudez had a fully bi-national childhood. She attributes her ability to connect people, in large part, to her grandmother, who would often take Bermudez and her siblings into Nogales, Sonora.

“All of our interactions with Ambos Nogales were because of her. We’d go have lunch, visit family members, go grocery shopping, attend mass or go with her to get her hair done,” Bermudez said.

When her grandmother wasn’t taking Bermudez and her siblings across the border, she was hosting people in her home. “It was what you’d expect of traditional Nana’s house: people stopping by for coffee and tacos and kisses, all of my uncles, her sons were very attached.”

That house, Bermudez says, gave her a valuable education. “Not only could I interact with both sides of border, speak both languages, I could interact with highly influential people, as well as old people, broke people. I knew how to interact with everyone because of my grandmother’s house.”

Her family also taught her about community and about entrepreneurship. Her grandmother had one of the first food trucks in Nogales, “Ma’ Chepas.” Her late father worked in law enforcement along with her uncle, and the rest worked in the produce industry, “two of the main sources of employment in Nogales,” she said.

When she wasn’t at her grandmother’s house, Bermudez was on the family’s multi-acre ranch, where her father raised bloodhounds and farm animals. Bermudez learned barrel racing, participated in competitive youth rodeo events, and loved taking care of the animals. “It was a perfect upbringing for me. I’m an early riser, couldn’t wait for sun to come up to go out and be out with the animals. That taught me a lot,” she said.

But not all of Bermudez’s past was sunny. Nogales in the late 1980s to mid ‘90s was a difficult place, she said.

During her pre-teen years, Bermudez says Nogales was plagued by gangs. The most reckless of the kids came from the Buenos Aires neighborhood on the other side of the border. “Somehow they would go to Nogales High School. I saw so many serious beatings as a teenager. It was a violent place for women because men would objectify women — that was part of the gang-life,” she said.

To escape that reality, Bermudez and her friends started going to clubs in Nogales, Sonora, or staying on the U.S. side of the border and getting people to buy them alcohol. “There was nothing to do but go out into the boonies and get drunk and make out. It was a moment in time.”

Bermudez said in those days no one was spared. When she was an eighth grader attending a Catholic school, she invited a friend over one afternoon and they got a call that the friend’s father had been burned alive in the trunk of his car.

There were also “tunnel rats,” runaways or kids without families, living in the sewer system. “They’d wave their fingers through the sidewalk grates and call out, ‘I’m thirsty, can you give me some water?’” she said.

To make matters worse, Bermudez had conflicting views with her family, “There was a lot happening with my parents messy divorce and my mother’s illnesses that my family didn’t want to face and preferred to ignore. It was very unstable.”

And so when her older sister graduated from high school they moved to Phoenix together to live on their own. Bermudez was only 16.

In Phoenix, Bermudez got a job as a receptionist at Muzak, the company that engineers background music for retail stores and elevators. The only other Latino in the office was a sound engineer, a first generation Guatemalan-American. They started dating and at age 18, Bermudez got pregnant. They moved to San Francisco and eventually Bermudez moved back home to Rio Rico, to get support from her dad.

It was then that she met Nils Urman, a fellow Nogalense who would change her life.

Urman ran the Santa Cruz County Workforce Development One Stop Center, a single point of entry to services and programs that prepare individuals for employment. Urman hired Bermudez to manage welfare-to-work cases at the organization’s Grand Ave. location. She was responsible for over 350+ cases, interviewing people and supporting them. The job also taught her how to file taxes, certified her in Microsoft Suites, improved her typing skills, and sent her to motivational and educational seminars.

“Nils is that person who took me out of hot mess and put me into a situation where I could succeed. I can honestly say that Nils saved me.”

At the time Urman had ideas to revitalize Nogales’ and had recently founded the Nogales Main Street Movement. Bermudez felt excited by the prospects. But there were still limited opportunities in Nogales, so she left to find work in the Bay area and eventually Tucson, where she was soon working to coordinate events, programs, and processes that were integral to Tucson’s downtown revitalization.

She was hired as a junior executive at the Gadsden Development Company, got involved with Tucson Young Professionals, chaired their First Friday program, worked with both Imagine Greater Tucson and TEDxTucson, and eventually joined the founding team of Connecting Coworking, where she reconnected with Urman at the Connect Beta. 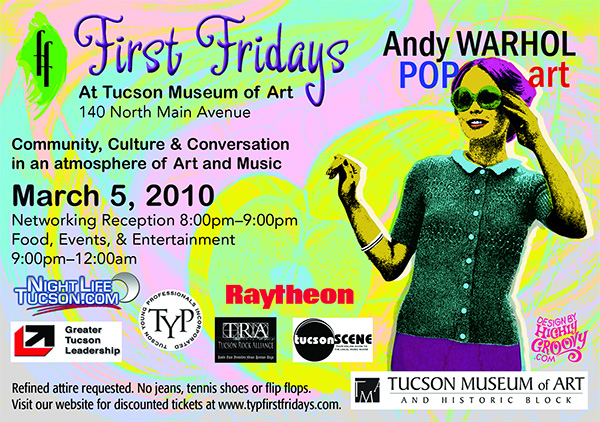 “Putting community focused, art and cultural events together for Tucson while it was transitioning into what it is today changed my life. The role I chose in my community was to find hidden treasures and put together themed events,” she said.

In 2014 Bermudez began working with Lead Local and Nogales Community Development to conduct a feasibility study in Nogales to explore the possibility of opening up a incubator and coworking space there. Returning to Nogales with her new skills opened her eyes to things she hadn’t seen before.

“I discovered so much about my community that I hadn’t considered before. Suddenly I was looking at the people who’d come to lunch at my grandmother’s house as professionals, and they saw me in the same light” she said.

Returning to Nogales and working closely with Urman, Stephanie saw the enormous potential in her hometown. That got her thinking not just about incubators and coworking spaces, but also about gatherings and new businesses along Morley Ave. and tourism and activity of any kind.

“Really, there’s nothing to do in Nogales, Arizona,” she said. But she knew there could be.

Catalyzing that “could be” means rethinking how businesses serve locals, creating new innovative districts to attract creative people from both sides of the border, and developing connections and relationships to stimulate the economy and new creative ideas.

“Can we give people a taste of safe Mexico on this side of the border? The idea excites me,” she said.

With her people skills, Bermudez is focusing on building trust in a community that is often afraid of new ideas. “This could be the number one idea-killing city in the world,” she said. “People are skeptical. You present a new idea and they say, sarcastically, ‘Good luck with that. That will never happen.’”

But Bermudez is determined. “Innovation in this case means throwing the baby out with the bathwater. I’m not even looking to work with the traditional paths,” she said.

Her block party was one example of a non-traditional event designed to spark new ideas. And other examples are gaining ground.

In early March, Nogales, Sonora held an innovation event for Sonoran university students to do “Moonshot Thinking,” an idea that asks people to think about a ten-fold improvement over what currently exists. Another event called “Startup Weekend” gathered entrepreneurs across the region and around the world to learn, network, and startup a business in 54 hours. Others are working on bringing the first “Fucked Up Nights” event to Nogales from Mexico City with help from the Mexican consulate and NCDC to share stories about how mistakes and failures.

“We’re taking small and calculated steps to develop this community,” she said. “It’s a slow process, but we’re getting closer to the goal.”

She says cross-border collaboration with Sonora is essential. “We are always going to depend on each other. But what does that exchange look like in the future?”

Bermudez sees technology and tourism playing key roles in that future, but said that success depends on local control. “The people of Nogales are tired of outsiders coming and identifying the opportunities here. I want to help make sure that these opportunities are for the people of Ambos Nogales first.”

Sixteen years ago Bermudez pitched to Urman an idea for a diner in the Noon building in Nogales. Now she wants to apply her energy and experience to launch an incubator space that hosts an academy of intergenerational border leaders who are taking innovative approaches to industry. Her podcast is a step in that direction, she said.

When she envisions the future of Moreley Avenue, Bermudez still sees her own diner and other businesses, “But I also see more cafes, a walkable retail district, food markets, yoga studios, asaderos, depositos and street performers. A combination of what used to be here and what currently exists in other familiar places,” she said.

She believes it’s possible. For starters, she doesn’t see the same kind of desperation in young people today in Nogales. Her son, now 16, is not exposed to the same kind of violence as she was. “My son has a completely different life. A wholesome life.”

That’s the kind of life Bermudez envisions for all Nogalenses. She wants people born and raised in Nogales to feel like they can come back home and have opportunities to live and contribute. “It’s my dream to ignite that.”