At the Iftar Table: Lessons in Friendship and Tolerance from Ramadan

Every year, the Foundation for Inter-Cultural Dialogue (FID), a non-profit organization founded by Turkish Arizonans to promote dialogue, mutual respect, and cooperation among different cultures and faiths, invites the staff of Southwest Folklife Alliance/Tucson Meet Yourself(TMY) to attend a special appreciation dinner during Ramadan.

Members of FID regularly participate in the annual TMY Folklife Festival, sharing Turkish food, folk arts, and performances of traditional Turkish dance. The Ramadan dinner is one way of expressing gratitude to community institutions and friends.

TMY was honored to join members of other faiths, community organizations, and non-Muslim friends to participate in this way in Ramadan, the month-long observance of fasting every year by Muslims worldwide.

The word Ramadan comes from ramida or ar-ramad, meaning heat or dryness. Obligatory for Muslims, the fast occurs each day from dawn until sunset, during which time they refrain from food, liquids, smoking, and sexual relations. Ceremonial meals occur before (suhoor) and after (iftar) the fast each morning and evening. 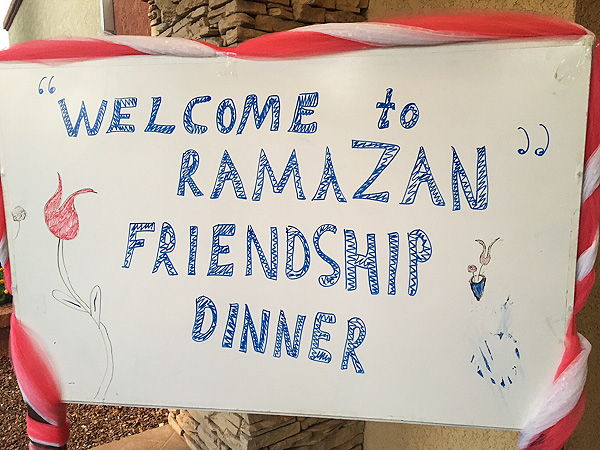 BorderLore’s Kimi Eisele’s recalls the Iftar dinner she and others of the SFA/TMY family shared with the FID community earlier this month:

I was offered a plate of dates, which is often the first food to break the fast at the iftar table. Then came a soup of orzo noodles in a spicy broth, followed by a meat, eggplant, and potato dish served with rice, and a spinach borek (a Turkish style fritter, similar to spanakopita), and a salad of greens. Traditional iftar meals are made up of fresh fruit, vegetables, halal meats, breads, cheeses, and sweets.

Ramadan is a time marked by prayer, charity, and self-discipline for Musilms. Fasting is believed to help a Muslim turn inward, away from worldly activities, as a way of cleansing the soul. The fast is also said to help teach patience and empathy.

While we ate, FID Executive Director Cetin Akkaya welcomed the guests, showed a short video about Ramadan, and expressed appreciation for people’s attendance. Akkaya also condemned the recent tragedy in Orlando, in which a gunman killed 49 people and injured 53 others in a gay dance club. He read a statement by a group called the Alliance for Shared Values and stressed that Muslims do not condone violence of any kind. “I hope we don’t hear of any more of these,” he said.

“According to the Quran, you can not be a Muslim and a terrorist,” Akkaya told me later. “You cannot be a terrorist and be Muslim.”

He said he worries about the misconceptions many Americans have about his faith. “There is a black screen in front of people’s eyes when it comes to Islam. They see ISIS, Al Queda, as if they represent Islam. In fact, Muslim people do not accept them as Muslims,” he said.

Akkaya said FID works to help open people’s eyes to Islam and other faiths and to work together to serve the community. The organization offers cultural lectures and service work, hosting community dinners at cultural centers and in homes, and bringing food to churches, synagogues, and the homeless community. Inter-faith dialogue is an important part of their mission, he said.

Testament to this was the diversity of the Ramadan dinner guests, representing various churches and organizations in Tucson. Among them were Pastor Ron Rude of Lutheran Campus Ministry at the University of Arizona, sisters from the Franciscan order, representatives from the Jewish faith, a representative from a South American sacred medicine group, TMY, and the Rev. Steve Keplinger from Grace St. Paul’s Church. Each of these representatives was invited to speak and introduce themselves.

Keplinger expressed dismay at the violence in Orlando and spoke of the need for kindness and tolerance. “What changes people is when they’re together and can hear about each other’s culture. This is the kind of event that helps end that kind of violence,” he said.

College students from Lutheran Campus Ministry shared highlights from a recent inter-faith trip to Thailand. One young man recalled sitting at the base of a waterfall, all around him dozens of people from all over the world. Another man sat across the water from him, he said, and the two communicated without speaking for 30 minutes. Another young woman raised in Jewish faith shared her experience visiting a Buddhist university and learning about the Buddhist practice, which she said she’d known very little about.

Over dinner, I took the time to get to know others at my table: Wally, a young Turkish man studying medicine at the University of Arizona; Tom, a former American contractor in Iran; a woman from Kurdistan who came to the US to teach language at the Sonoran Science Academy; and Ferenc, a Hungarian engineer who regularly attends FID events.

We ate together and shared stories about what we do. Both Wally and the woman from Kurdistan were observing Ramadan. Tom, a guest of Wally’s whom he met at the Tucson House of Islam near the UA campus, said he was not fasting for health reasons. Raised as a Christian, Tom was first introduced to Islam in Iran and fell in love with the people and the faith.

“I have a musical background. The first time I heard the call to prayer, it was spine tingling. I felt this magnetic attraction,” he said. “Going to the mosque in Tucson is a way I’ve been able to keep experiencing that.”

In place of fasting, Tom said he was using the month to read the Quran, a text he finds offers many lessons that resemble those of the Bible.

“It’s odd to say this, but Islam has made me a better Christian,” Tom said. “Thinking about others, brotherhood, love thy neighbor as thyself. I feel that very strongly.”

As we ate together and shared stories, children — Turkish, American, Muslim, Christian, Jewish — ran through the hall, playing and laughing together. While there is much work to do in the world to expand an atmosphere of respect, on this particular night of Ramadan, peace and tolerance were very much thriving.