An Herbalist on Every Corner John Slattery: Medicinal Plants of the Southwest

John Slattery’s vision of a healthy community is that one that has an herbalist on every corner.

“Not because it’s a viable livelihood,” he says, “but because it would be an indication of healthy ecosystem, where knowledge of plants is living and available and practiced.”

For now though, Slattery — an herbalist, ethnobotanist, writer and teacher — can reach some of the 350,000 attendees of Tucson Meet Yourself via his booth in the Community Matters section of the Festival.

Slattery first started sharing his work at TMY as the owner of Desert Tortoise Botanicals, a business that sells local herbs, teas, tinctures, medicines and other healing items made with plants from the Southwest. He draws people to the booth with these projects, plus his willingness to answer questions about local plants for food and medicine.

No doubt people are also attracted to the bright pink prickly pear juice they see others drinking.

“Yes, barrels of that. We sell it by the cup, or in bottles,” he says. “It’s a significant part of our business there.”

But beyond cold drinks, Slattery says his booth has become “a meeting place for people who are interested in herbs for healing and (for) provided education for our relationship with place.”

Slattery says he appreciates that the Festival brings so many people together in a single public venue.

“It’s a jumble,” he says. “People from all over the globe bring their place here.”

But he says his goal is to try to inspire an appreciation for the Sonoran Desert by sharing both traditional and current relationships between people and plants of the region.

Some years he has brought his longtime mentor, Doña Olga Ruiz Cañez, a 75-year-old herbalist from Imuris, Sonora, to help illustrate this relationship.

Slattery calls Doña Olga a “living example” of a very traditional way of life. “She comes from a way of life in Sonora where they were largely living off land, nomadic. She learned to gather herbs when she was 9 years old,” he says.

At the booth, Doña Olga displayed bags of chuchupate, which is also called oshá root; yerba del índio; and yerba mansa. Her presence was meaningful not just to Slattery, but also to TMY audiences.

“People would see her herbs and stop and say, ‘I know what this is,’ or ‘My tia used to do this’,” Slattery says.  That kind of exchange “opens up a doorway for connecting this culture that has been in this region for a long time,” he says.

While educating the public audience at the Festival is Slattery’s passion, he says that being there year after year has been economically beneficial as well.

“Our exposure at TMY had a big impact on the business, financially, and in terms of number of people we could reach,” he says.

In fact, his Festival experience made him realize that his work with herbs could become a viable business. “It has really been a way for us to bring what we offer to a greater percent of the community.

Not just people who go to farmers market shop at Native Seeds/SEARCH or the Food Conspiracy Co-op,” he says. “It connects us with a whole different community.”

Slattery says he hopes people who visit his booth will understand the ways plants and healing ourselves with them “can be part of our lives in a productive way, not as a symbol of antiquated past.”

“In the broadest sense, I want to reflect to them a deep love and appreciation for the home in which we live, and more specifically, for the culture around food and plants and medicine here,” he says.

Foraging in the Southwest 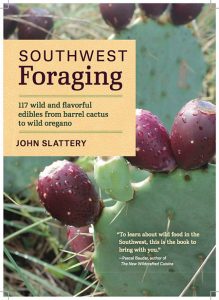 Slattery is the author of a new book, Southwest Foraging, a guide for foraging in Texas, New Mexico, Arizona Oklahoma, Southern Nevada and Southern Utah. The book incorporates descriptions of individual plants, their habitats, where and when to forage and how to prepare them, he says.

The goal of the book, Slattery says, is to help people identify plants clearly and safely. “It’s bent toward understanding the ecological ramifications of foraging. Stewardship. How to authentically and effectively develop relationships with local environment, not just looking at what we can take but how to work with it and understand effects of our actions.”