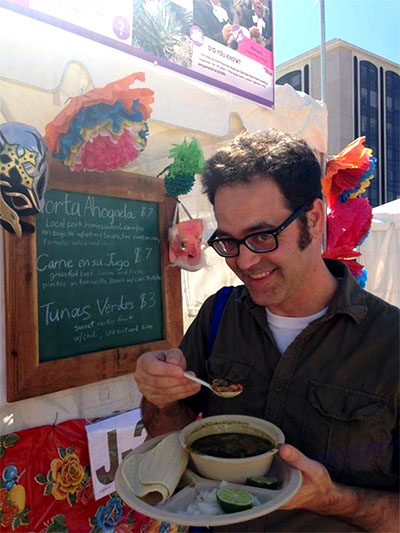 Saturday, October 10 in the Presidio: A folklorist focuses unobtrusively on a dance demonstration in progress on the City Hall stage. Something that catches his eye makes him chuckle. His field notes track the experience: Detailing observations on dance steps, audience response, then further interaction about the music. After the applause erupts, he takes more notes before moving on to another area of the festival.

Such was the work of folklorist, scholar, musician and Maryland Traditions Director Clifford Murphy, invited to Tucson Meet Yourself as this year’s visiting folklorist. Artfully engaged during TMY weekend, Dr. Murphy shared some of his observations about our festival and its mission in our region:

“Typical folklife festivals are more of an opportunity for communities to share their folklife with the public than they are an actual part of a community’s folklife,” he notes. “However, what amazed me about my visit to Tucson Meet Yourself is that a 41 year-old festival can develop a kind of culture all its own.”

Dr. Murphy saw a synergy between the TMY audiences and the Festival participants: “What was most striking — and inspiring — about TMY was the fact that the audience looks like a reflection of the festival participants (the musicians, the craft artists, the food vendors, etc.). What this shows me is that the festival has built a significant amount of trust and credibility with the communities it celebrates.”

There are several folklife festivals as large as — or larger than — TMY, and the fact that the audience does not look like the participants doesn’t mean that those festivals are failures, Dr. Murphy continues. “But all of us who produce folklife festivals hope that these events can help to fortify cultural traditions. If we book an excellent musical group into our festival and tell the world how amazing they are, it is certainly a positive boost to the musicians, and enjoyable for the audience, but it fails to celebrate that artist in front of their own ‘home’ community. It is hard to fortify traditions if we cannot help to foster greater appreciation and understanding of cultural traditions within their home community. TMY does not have this problem, and that is impressive!”

As Dr. Murphy discovered, the diverse traditions of the region enriched TMY in ways that set it apart from other festivals.

About Clifford Murphy as folklorist and musician:

For starters, I would just say that we’re all involved in folklife in our own way. But I decided to become a folklorist/ethnomusicologist because I saw an erosion of cultural equity in the country. I spent fourteen years playing in a rock band from New Hampshire — we got to see a lot of the USA and Europe, but we made negative money. I learned that the entertainment industry is inherently hostile to independent, local, and regional styles — the industry likes its musicians to be stylistically malleable. The more we traveled, the more I saw that this kind of pressure by national/corporate culture to alter local/regional culture extended way beyond music. For example, from about 1995 to 2000, I saw all of my favorite mom-and-pop truck stops get bought by national chains and converted into uniform florescent oases. Every place along the highway began to feel and look like every other place – whether it was Birmingham, Alabama or Bangor, Maine. And, as someone who grew up in a state that does not really occupy much space in the National imagination or identity, I also began to feel a bewildering sense that nationalized radio and television broadcasts created the sense — locally — that culture was something that came from someplace else. I decided I wanted to push back against this kind of cultural homogenization in ways that I could not do through my own music. So I went back to school and got a PhD in Ethnomusicology. I’ve since written a book – an ethnography and history of country music in New England, and I have been the state folklorist at the Maryland State Arts Council for nearly seven years. In the process, I have met many people — like those at the Tucson Meet Yourself festival — who have carried on their cultural traditions often in the face of great odds. I find this personally inspiring. As a parent of three little kids, I try to teach my children to look at the world critically, to seek out cultural traditions, and to find enjoyment in everyday folklife.

Our 2014 Festival: A Video Retrospective