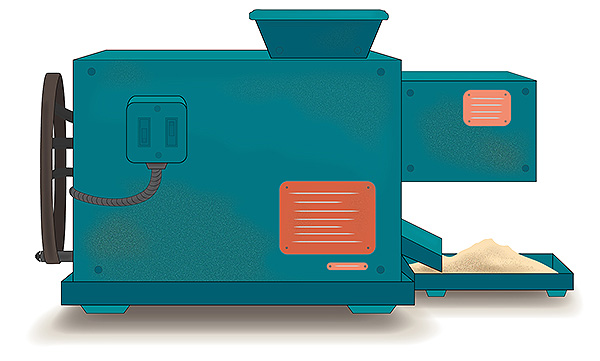 My father’s kitchen was an old, car garage in El Presidio neighborhood of downtown Tucson, Arizona. Outside, small plastic bags of water hung from the roof to keep flies away. A brick path opened to a tiny patio where as a girl I’d stand to watch the rain. With the right sunset light, you could make out the words of the original text my great-grandfather had painted on the storefront window: GROCERY / EL RAPIDO MOLINO / de Nixtamal / Manufactura de Tortillas y Masa.

When my great-grandfather Aurelio Perez opened that food store in 1933, I’m sure he imagined it would live forever. He made tortillas and tamales and sold them to neighbors. He also ground corn and prepared masa for customers. He took phone orders and walked door-to-door in the neighborhood peddling panocha, oregano, and Mexican cheese. My grandmother and all her seven sisters worked in the store at some point. Even after they were married. After children. After the war and after women’s liberation. After their husbands died.

By the time my brother Ricky and I worked in that garage kitchen in the 1980s and 90s, the whole property faced condemnation. The adobe crumbled, the roof leaked, and there was never money for what they called “revitalization.” Ricky and I spent summers and weekends and school vacation days in that kitchen, wading in grease, dreaming of movie theaters or even school days.

But everything in the kitchen seemed eternal. Scribbled notes clung to the plaster my father had painted and re-painted white. The swamp cooler that barely cooled us chugged along. A ceiling fan hovered precariously over our heads. My father fixed anything broken with a piece of string or a strip of tape. Though every now and then came something new—a microwave, a huge mirror engraved with the image of Selena, the latest Arizona Wildcat football itinerary—the mainstay of the kitchen was the old molino, an electric corn mill, which came to Tucson with my great-grandfather in the 1930s.

Around the turn of the 20th century, the molino began to take up residence in Mexican kitchens, changing them forever. The molino replaced the metate, the volcanic grinding stone used to make corn masa for thousands of years. This modernization represented a new dawn for tortilla and tamal making. The molino could do more, and do it faster. It not only saved time and energy, but also disrupted traditional gender roles. For centuries, corn grinding, tortilla, and tamal making had been primarily women’s work. Once the molino arrived, women gathered communally around neighborhood mills to have masa prepared for their meals, but eventually homemade tortilla and tamal production was moved to neighborhood markets, run mostly by men. Women took a behind-the-scenes position in the one place they had long reigned.

The molino’s not-so-small revolution in the kitchen had a similar effect on the family business at El Rapido. The machine transferred work and away from my great-grandmother, my grandmother, and her sisters, as men like my great-grandfather and father became the new face of Mexican food.

My father made more tamales and tortillas than you could imagine with that molino. He’d hunch over its mouth, his eyelids sagging over his eyelashes, pushing nixtamal or corn down its neck. I’d watch the stones inside press against each other, watch the corn turn to mush and slide out.

To me, the molino seemed an angry thing. I knew it could pulverize anything that got too close. But for my father, it was the most valuable tool in the kitchen. If it broke down, he called special handymen from out of town to resuscitate it. It was like a dragon that could regenerate parts year after year.

My father never lost his faith in the molino, and the molino was faithful to the end. It wasn’t a better, faster machine that did away with the family business, but the forces of urban renewal and gentrification, which conspired to close El Rapido on Christmas Eve in the year 2000.

My father once said, “I know this: you can’t stop progress.” He kept the stones of that old molino grinding until they ground themselves. Until nothing was left.

Melani “Mele” Martinez is a writer, mother, and flamenco dancer from Tucson, AZ. She is currently at work on a memoir entitled The Molino and works as a lecturer at the University of Arizona teaching first year writing and food writing courses.