Many in Tucson are committed to explore a food culture that is hyper-local, and that reflects on traditions and lifelong experiences that celebrate food as a creative, place-making endeavor. The Slow Food movement is part of this framework, spreading the word about preserving tradition and the pleasure of quality local food, at the same time building community.

Doug Biggers, former Tucson Weekly founder and publisher, paid attention to the crafting and exploration underway in Tucson. It made economic and social sense. He mulled the “revolution” he saw emerging, and with friends developed the idea of Edible Baja as a way to reclaim personal meaning and validity of the craft of food here in Tucson. 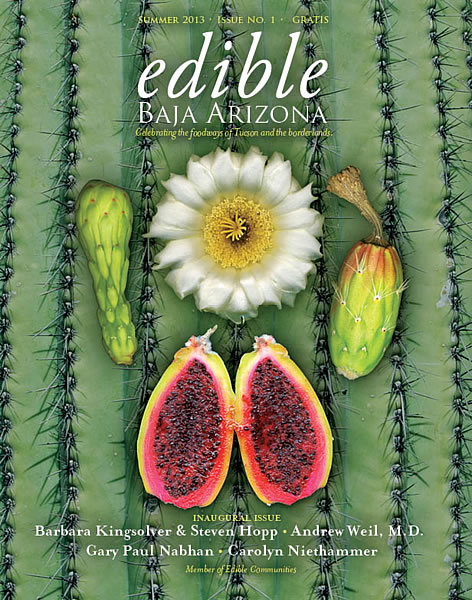 He and his crew started writing about this vision in late 2012. Social media helped them find like-minded creative souls to follow along. The common thread is a worldview that includes creativity, love of indigenous and local food, and joy in an approach that is healthy, mindful of tradition and produced at a human, not industrialized pace.

Edible Baja Arizona premiered this month, a journal of crafting and local foods. BorderLore spoke with Doug about the magazine and his reporting on food’s relationship to work and life that’s all about crafting and telling stories that are authentically made.

Doug, you speak about food as our “most direct and enduring connection to …cultures.” As you created Edible Baja AZ, what did you learn about food folklife within our region and its various ethnic groups?
The editorial journey of Edible Baja Arizona is one of discovery and celebration when it comes to the foodways of this region. The first issue is just the beginning of what we intend as a long and interesting conversation with our readers, as we search for fascinating and enduring aspects of how food and cultures intertwine.

How does the folklore of food fit into the food revolution currently underway?
Folkore is that repository of knowledge and appreciation that imbues local and heritage foods with such special characteristics. So, discovering and celebrating these characteristics adds a dimensionality to local foods that transcends its mere locality.

Traditional foods impact economies and health. Will you elaborate with a few examples as you’ve discovered (Maybe Mexican-American traditional forms/processing of grain, Native American corn)?
Most notably, resurgence in heritage foods, such as tepary beans, white Sonoran wheat, and the many uses of mesquite are prime examples.

Do you or your family have personal family food traditions you’d like to share?
Our food traditions are very influenced by the nearly five decades we’ve lived in Baja Arizona. We celebrate and embrace the Mexican heritage, as we re-interpret it within our primarily plant-based diet.

Where do you think Tucson Meet Yourself fits into the food revolution you describe in the Manifesto?
Tucson Meet Yourself epitomizes everything about the connecting fabric of food in our community, by linking food to traditions and stories and meaning that transcends mere nutrition. I would like to see TMY embrace even more fully the role of local foods in strengthening our community connections.

What has been the response of the community to Edible Baja AZ?
We have been gratified and truly humbled by the response to EBA. From the huge turnout (more than 1,000) at our launch party at MOCA, where we truly felt the love and appreciation of the community, to the incredible response on our Facebook page from readers exclaiming about the magazine, to the face to face feedback we are receiving from our distribution outlets and advertisers….it’s all very positive, supportive and enthusiastic. I think our timing was really fortunate, in that we’ve obviously plugged into an existing zeitgeist about local, heritage and wild foods that speaks meaningfully to many people who live in Baja Arizona.

CALL TO ACTION: Love Tucson foodways? Then, do not hesitate for a second, subscribe to Edible Baja Arizona TODAY!! For information about subscriptions email info@ediblebajaarizona.com