Eating with Abundance of Heart and Purpose

Potent memories of food are all-consuming at holiday time, as families explore and enjoy enduring cycles rich in taste, symbolism and shared experience.

“Food and tradition at this time of year, no matter the culture, seems to have to do with bringing ‘light’ — both literal and symbolic — into the darkest time of the year,” explains food scholar and author Linda Berzok. “It could be Hanukkah latkes (potato pancakes fried in oil), sweet foods like cookies and fruitcake, hot alcoholic drinks like Swedish Glögg and English Wassail or even cold rich eggnog.  Gifting of foods like homemade cookies, cranberry bread, or tamales, is important too.  These traditions bring a much-needed spark into the short days and long nights.” 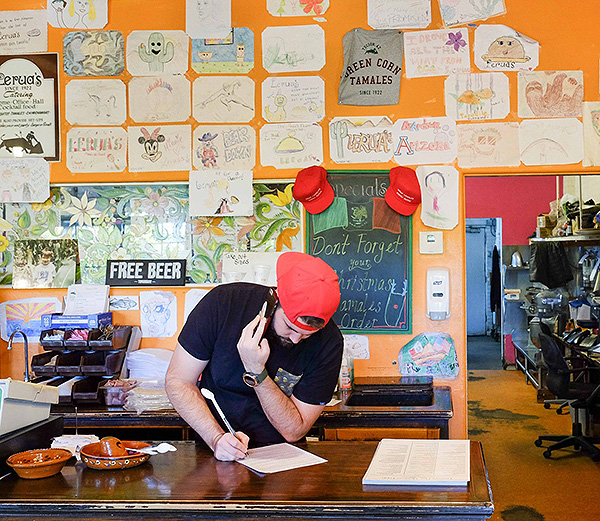 Lerua’s nourishes community as well as satisfies taste buds. Chef Mikey works the counter, with community storytelling covering the walls behind him; photo by Leigh Spigelman

By the loveliness of its sweetness, by its symbolism and rituals dating from ancient times — the mother grain of corn is one ingredient that tells a story of hidden significance this month, says Michael (Chef Mikey) Hultquist, Jr., chef and co-owner with his dad of Lerua’s Fine Mexican Foods, on Broadway in Tucson.

It’s all about the cooks who gather in the kitchens to shape the narrative of the season’s festive folklife, Chef Mikey continues. Nearing the one century mark, Lerua’s has kindled a sense of community through its cooking, its small-kitchen table atmosphere and its acknowledgement of tradition.

Perhaps a most elevated example of this shared experience is found in Lerua’s holiday green corn tamales, little bundles full of memory and flavorful tradition that Lerua’s sells in quantities nearing 7000 dozen between November 24 and December 24. “We never lose sight of what is a labor of love and preserved heritage,” says Chef Mikey. “We’re constantly rekindling a family ritual to share with the community, to make something cherished for holidays, whether that be for the Feast of Our Lady of Guadalupe, Christmas, or open houses and office parties. In Tucson, tamales are almost mandatory for holiday tables, like holiday cookies.”

Enormous respect for corn and other indigenous crops come from generations of family cooks and farmers. They are the greatest influence, Linda and Chef Mikey concur.  Lerua’s culinary family begins prepping for the holiday baking year-long through the sourcing of its corn… from all parts of Mexico where the soil, climate and landscape converge in a trinity producing just the right grain. “Good corn comes in with everything that the good earth gives to it — even if that means uneven kernels, dirt and worms — It shows us its pureness, and that it’s not GMO,” says Chef Mikey.

A cultural value system is ingrained in the Wilson Produce family, of which Lerua’s is part. The Wilson Produce family is a fourth generation grower-distributor of fresh fruits and vegetables that owns two farms in Sinaloa and Baja California Sur, Mexico, and also influences the agricultural practices and business decisions of the company’s more than 15 partner farms in the Northern Mexico region. The main sales and distribution warehouse for the family business is in Nogales, Arizona. Alicia Martin, the great granddaughter of the family farm founder, who now owns and runs La Roca Restaurant in Nogales, Mexico, is Mikey’s mother… and links Lerua’s within the Wilson Produce family. 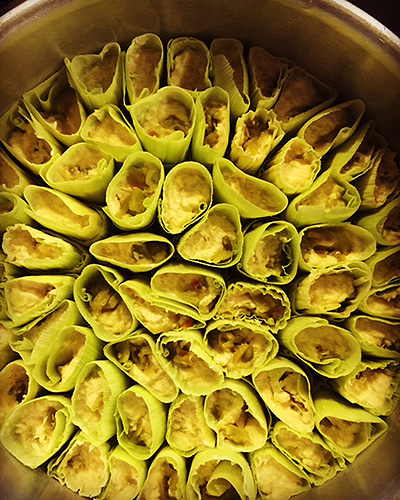 One seasonal specialty of Lerua’s comes from the recipe of Chef Mikey’s grandmother, Carmen. Wrapped in traditional raw green corn husks, the beloved green corn tamales encompass both the value of community as well as distinctive taste of a signature fresh-ground kernel filling.

The ritual of making these special tamales also is communicated across generations, a tradition centuries old. The women who have worked together for decades in Lerua’s kitchen are still the masters, preparing the corn and assembling and wrapping the tamales before steaming them in large pots. Rita, who came from a small village in Mexico more than 55 years ago and who once cut the corn for Lerua’s with her machete, is still part of Lerua’s kitchen and tamal process. There’s also Alicia (Lecho): With more than 25 years of tamale prep for Lerua’s, Lecho is a commanding, skilled practitioner who meticulously reshapes the tamales after steaming. 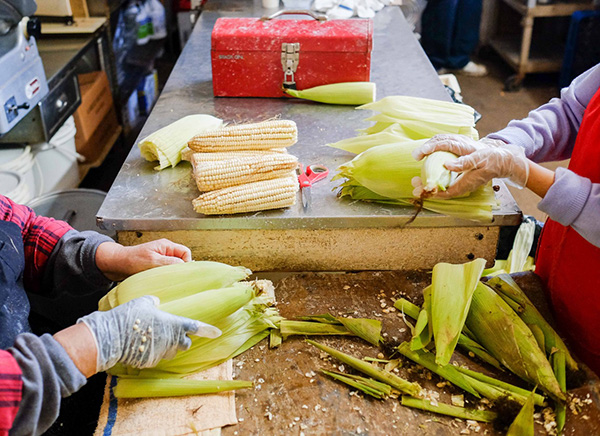 Experienced hands of the masters work the mother grain, the corn; photo by Leigh Spigelman

In Mexico, this ritual of gathering to prepare the tamales is called the tamaladas. As Linda explains: “Tamale-making or the tamalada is a group activity (usually limited to women), since the work can be laborious. But it gives the makers a chance to talk, laugh and gossip, and most important, to teach the younger girls how to make them so the tradition is passed on.  Many groups make hundreds and then give them as seasonal presents.  Fortunately, (the tamales) freeze well.”

Lerua’s tamale preparations are an intensive processes, with the magic bundles all made from scratch. There is the preparation of the corn, the soaking of the husks and then the filling, spreading, wrapping and shaping of each tamal, one by one.  Chef Mikey smiles when asked about his grandmother’s “secret recipe,” which is a light meld of the ground corn with cheese and Hatch chiles in addition to spices and soybean oil (not lard).  The real secret is truly in the grinding of the corn, milled on grandmother Carmen’s original volcanic stone grinder, he suggests. The porous texture of the stone, he says, along with the special cut of the grind, is what gives the tamal its magical flavor qualities and its adored texture. 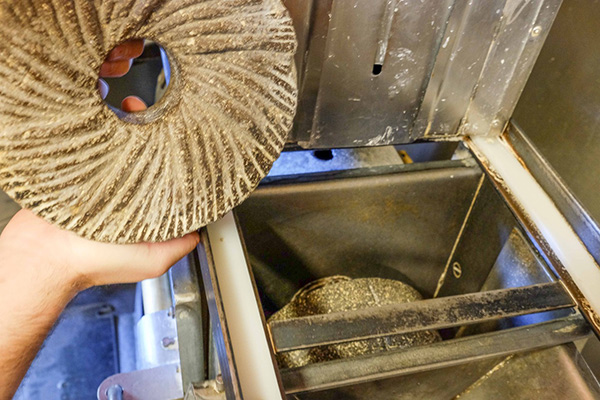 Tucson’s Take on the Tamalada

In Tucson, there is a folklife surrounding the tamale making, observes Linda. Many families have taken on the tamalada as a tradition, a way to nourish and build community. “When we were newcomers,” she explains, “we were invited to a mini-tamalada at the home of the late Dr. Bunny Fontana, retired UA ethnologist extraordinaire, and his artist wife Hazel.  Since Hazel had already made the masa and the shredded pork, and Bunny soaked the dried husks in the sink, our efforts consisted only of learning how and where to smear the masa and pork and how to fold the tamales, followed by eating lots with beer!”

Both Chef Mikey and Linda, like their grandmothers before them, believe that community is influenced by food traditions, by the mood and sensibility of the kitchen cook, as well as by the ingredients and the tools she (or he) uses. “Everyone has a ‘secret’ recipe, some cooking way that is revered and protected. Everyone’s grandmother makes the best tamale, a family memory that is crafted in a special way,” says Chef Mikey.

The earliest family memories for Chef Mikey come not from the green corn tamales cooking in Carmen’s kitchen, but from the sweet bean treat (also served at Lerua’s for just a few weeks in December). The masa is a delectable blend of the ground beans slow cooked with Mexican cinnamon, clove, star anise, sugar and other spices. “My fondest memories are of waking up on the holidays, going to my grandmother’s house, and seeing that pot of sweet bean tamale on the stove,” he recalls. “As I’ve gotten older, I’ve found there’s nothing as satisfying as a good cup of dark French pressed coffee with a sweet bean tamale. It is the perfect breakfast.”

For Linda, the holiday memories are all in the cookies: “My mother used to begin in August, making batches and freezing them.  Her Swedish cookies included Pepparkakor, an ultra-thin spice cookie, and Spritz, a ruffled butter cookie.  These traditional cookies are very fragile and crisp.  I can tell you these are very hard to make.  Spritz are made with a cookie press, and although I bought a vintage one on E-bay and also a modern one on Amazon, neither my husband nor I could turn the crank and get more then a few cookies out!” 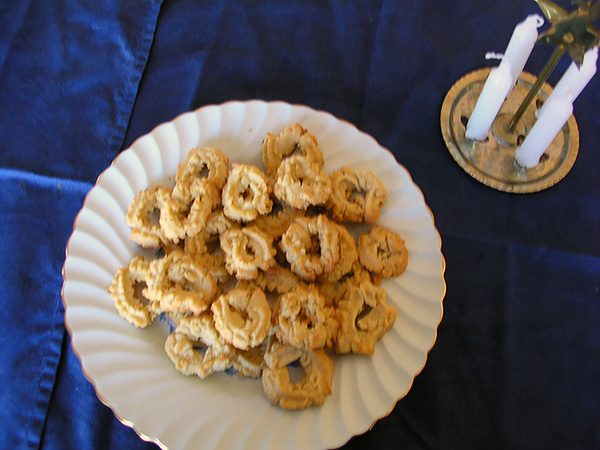 Linda continues: “I prefer to make Drommar (Swedish for dreams), an almond flavored cookie.  They contain something called hartshorn in the old country; this contains a chemical that produces the crispness in the cookies.  Today, one substitutes some crushed ammonium carbonate (baker’s ammonium), available at King Arthur Flour… For some reason, my mother always recorded how many she had made of which variety.  In 1982, she made 941 while in 1983, she topped out at a whopping 1,350!  The bulk of these were gifted.”

Mesoamericans believed corn was important, a food of the gods. Preciously wrapped, the tamales (named by the Spanish, but also tamalli, from the Aztec’s Nahautl language) became part of ritual offerings during the time of the conquistadors. Before that, the bundles were an important portable food for warriors. Later, the tamal became a Christian symbol of the Christ Child Jesus, swaddled and lying in the manger.

The kitchen continues as a revered place of tradition, says Chef Mikey, with cooking from the heart allowing us all to feel close to our heritage, our ancestors.  “You go through in the making of these traditional foods… and how you grind the corn, how you shape the tamal — it’s tradition. It’s the way I was taught.”

Food traditions, like the green corn tamal or the Drommar, are worth waiting for. Stirred into our memories early in life, we pick up our food treasure and find contentment in what the season brings us. Our feasts are stories of neighborliness and cultural tradition.