When Gayle Castañeda was five years old, her grandparents brought her a doll from Nassau, the Bahamas, outfitted in traditional costume. “When I saw it, something just clicked. I loved it.”

Since then she hasn’t stopped collecting “ethnic dolls,” as she calls them, dolls that show the traditional clothing of a particular region or people.

She has over 1,000 dolls in her collection, none of which are exact repeats, she says. The dolls form the basis of the Castañeda Museum of Ethnic Costume, a Tucson nonprofit organization dedicated to the study and exhibition of the world’s ethnic and folk costume. 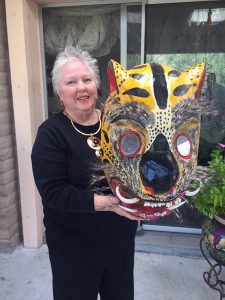 Castañeda sees her collection as a way to create interest and knowledge about other cultures.  “Our country is so ignorant about geography. The only time we learn about other places is when there’s conflict there,” she says.

Castañeda has shared dolls from her collection at various institutions, including the Tucson International Airport, and more recently, at a nine-month exhibit at the Sosa-Carillo Fremont House through the Arizona Historical Society. “We included a special section about indigenous people of this region, sharing material culture of the Tohono O’odham and Yaqui people,” she says.

She is also the author of Around the World from A to Z with Ethnic Dolls, an e-book showcasing an alphabet’s worth of dolls. (See accompanying images). 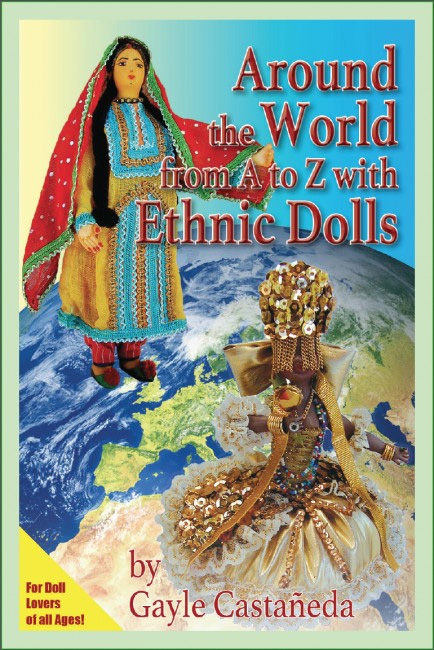 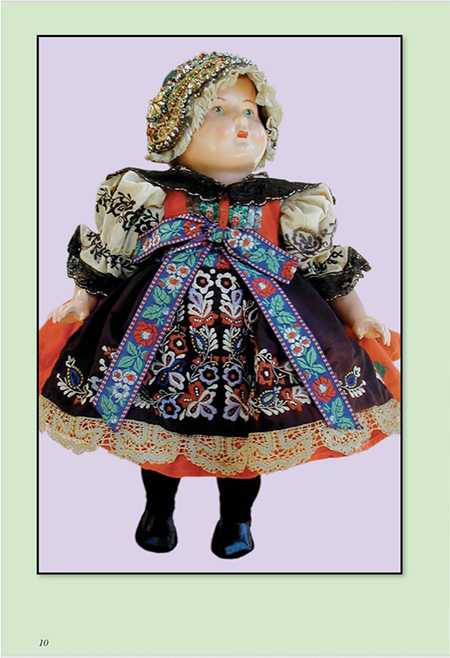 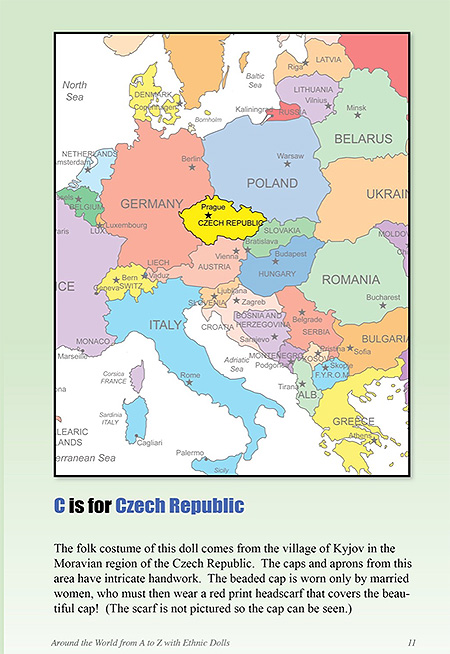 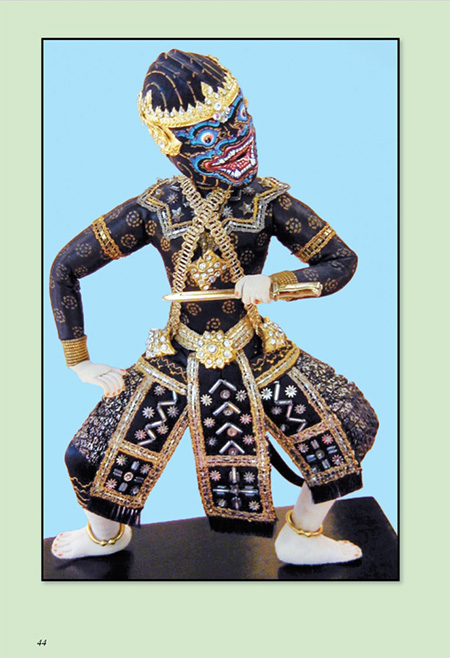 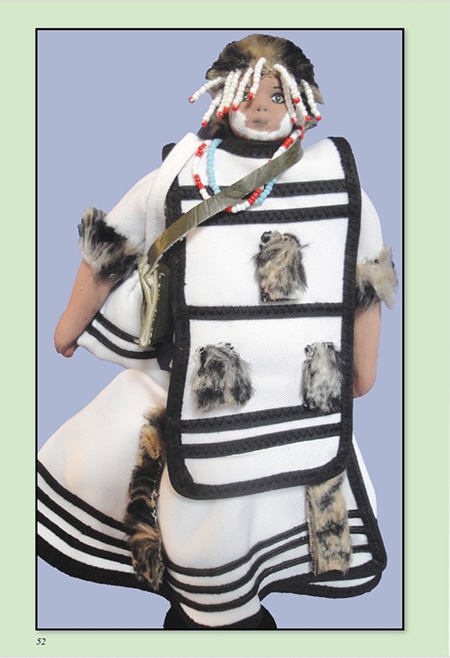 Doll dressed in clothing of a Xhosa sangoma 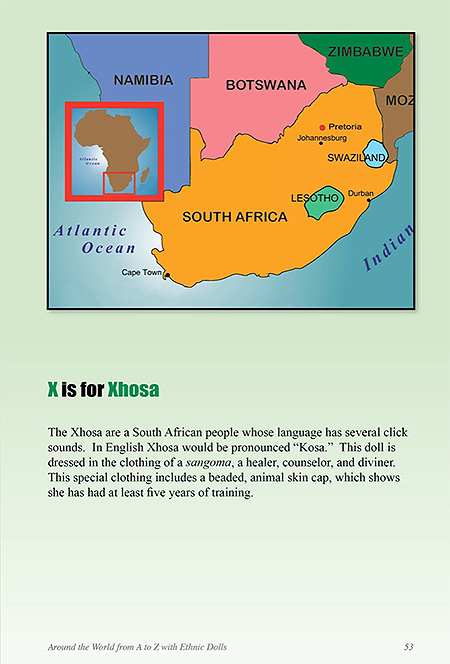 Castañeda says many things influence costume, including climate, topography, access to materials, and spiritual beliefs. “Many of these costumes are still worn,” she says. “Maybe only for special occasions, but still worn.”

The dolls reflect the uniqueness of traditional costume around the world. In Guatemala, for example, some villages incorporate similar designs into their textiles, but their meanings might be different.

The same is true for Europe, she says. “The differences! Whoa! On Eastern Europe you can go from one valley to the next valley over and find a whole different way of dress.”

In the past 20 years, Castañeda has done most of her collecting at antique stores. “They’re a good source, but you don’t always know how old the doll is because there are no records,” she says.

Castañeda defines “ethnic” as “anything that’s not modern 20th or 21st century clothing. Clothing or costume that traditional bellowed to a certain group of people.” 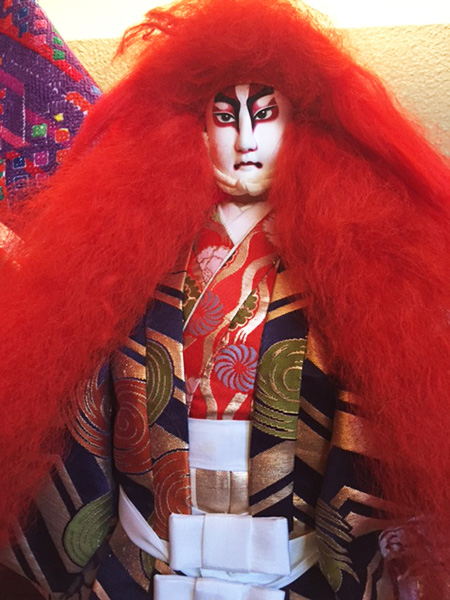 One of the most popular dance-plays in Japan’s Kabuki theatre is Renjishi, a story of a father lion-like being & his son. To test the courage & strength of his son, the father pushes him over a cliff to see if he is able to climb back up. The son is able to do so & his achievement is celebrated in the final dance of the play. The father lion is portrayed with white hair/mane & the son with a red mane.

She recognizes that culture, however, is not static and that traditions and garments change over time. “There’s a lot of pride in these garments, even if people don’t wear them all the time. They might wear Western garb to get a job, for instance.”

Included in Castañeda’s collection are textiles from around the world. Her first textile was a traditional Zapotec outfit from Oaxaca. 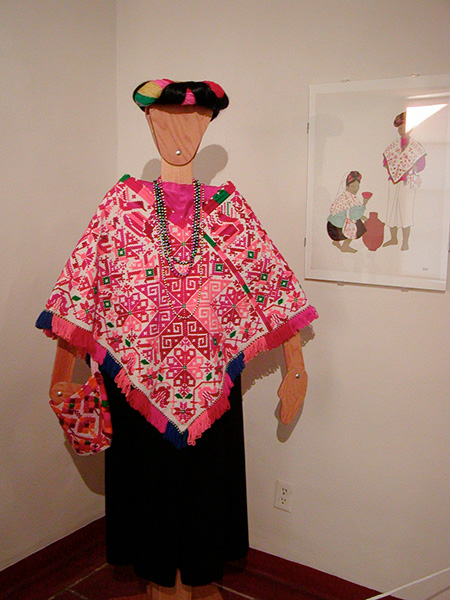 Huastec women’s garment, San Luis Potosí, Mexico: This pre-Hispanic, embroidered garment is known as a quechquemitl and is probably a ceremonial garment still worn in various locations of central Mexico and is worn by the Huastec, the northernmost Maya people. Although it appears to be triangular in form, it is assembled with rectangular pieces of material of a predetermined size. Among the designs of plants and animals, there is an 8-pointed star, which appears on textiles of other indigenous groups in Mexico and means different things to different groups. The headpiece is of yarn, which women wear intertwined in their hair.

While visiting Oaxaca City in 1980, she saw a woman walking down the street wearing a white blouse with traditional embroidery, her hair wrapped up with yarn.

“As soon as I saw her, I thought, I want her clothes.” So she and her then-husband followed the woman into a bank and struck up a conversation, via the woman’s husband, who spoke Spanish.

“They ended up inviting us back to their village and there I was in the middle of all the huts and the woman was wrapping me up in her clothes,” Castañeda says. “I know, it’s a little ridiculous.”

Castañeda said she’d wanted the original textiles, not a replica made for tourists, so she asked the woman if she could buy that very outfit. “I was pregnant at the time and that woman was wrapping me so tightly in that cloth. I thought, ‘Oh boy, this is interesting.’ But it was great and funny. Everyone came out to look at the gringa!” 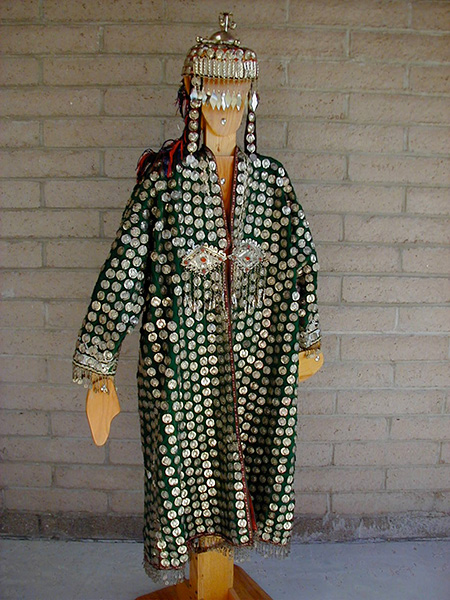 Turkoman woman’s coat, Uzbekistan: The coat is covered in stamped metal medallions and protective amulets are sewn on the front and back. The tinkling sound of the loose metal pieces is said to help ward off evil spirits. The headpiece has dangles across the forehead symbolizing falling rain water. Sound is an important design element for garments and headpieces.

Castañeda continued collecting clothing ever since. She recently acquired a women’s garment from Uzbekistan, black with gold medallions hand-sewn in columns up and down the cloak. The headpiece is also adorned with hanging medallions that create sound during movement. “That symbolizes rain,” Castañeda says, “Rainwater is the ultimate symbol of femininity. Woman creates life.”

Both the textiles and the dolls are emblems of culture and tradition, she says. “They’re a fun way to learn about other people. There are so many different people in the world!”

Currently Castañeda is seeking a permanent home for the collection and says she plans to keep collecting dolls and textiles as long as she can.

“Maybe it’s a gene, the ethnic doll-collecting gene that the good Lord gave me. It’s an addiction. I just can’t imagine how anyone wouldn’t go crazy over these.”