Since the mid-1990s I have been photographing local decorated food trucks and carts, which I thought to be visually interesting. Many of the painted decorations have strong Mexican cultural content.

The custom of naming and decorating trucks and businesses in fanciful ways is well established in urban Mexican culture. In his wonderful, if slightly aggravating book, Viva Mexico!  (Eland Books of London, 1982 reprint of 1908 edition), Charles Macomb Flandreau lists names of pulquerías in Mexico City. Among the most notable are “Las Flores de Abril,” “El Nido de Amor,” and “La Isla de Sacrificios.” The naming of commercial vehicles was introduced to gringo readers of the comic strip Gordo, many of who still remember the marvelous rickety bus, EL COMETA HALLEY, which was said to run on “grape juice.” More on Mexican truck mottos and names may be found in Grant La Farge’s Faith in God and Full Speed Ahead! Dichos from the Trucks and Buses of Mexico and Latin America (Sunstone Press, 1985).

Food trucks and carts specializing in Sonoran hot dogs have been proliferating in Tucson in recent years. For the record, Sonoran hot dogs are regular hot dogs (“winis” or “guinis” in local Spanish) that have been wrapped in bacon, grilled, and served on a birrote or Mexican-style bun with all or some of the following: chopped onions, beans, guacamole, mustard and mayonnaise, and salsa fresca, with a grilled chili pepper on the side. Other condiments can be offered separately.

The carts are usually decorated with signage including the words “SONORAN HOT DOGS” and the name of the enterprise. Some few are embellished with graphics. One that recently caught my attention on the southwest corner of Broadway and Cherry was the inspiration for this article. It was labelled “CHINGUINIS” on one side, and had pictures of a stereotypical Chinese man and woman on the other. The owner, of Chinese and Mexican ancestry, explained that his friends called him a “Chino,” and his kids “Winis,” and the word was a combination of the two names. He did not address the fact that “chinguinis” also appears to be a combination of “winis” with “chingar” (Mexican slang for “to have sexual intercourse”). This pun would not go unnoticed by any local Spanish speaker.

The cart spurred me to photograph more hot dog carts and to comb through my collection for other slides of food truck graphics. Following is a collection of some of the more visually interesting images I have made since 1986. 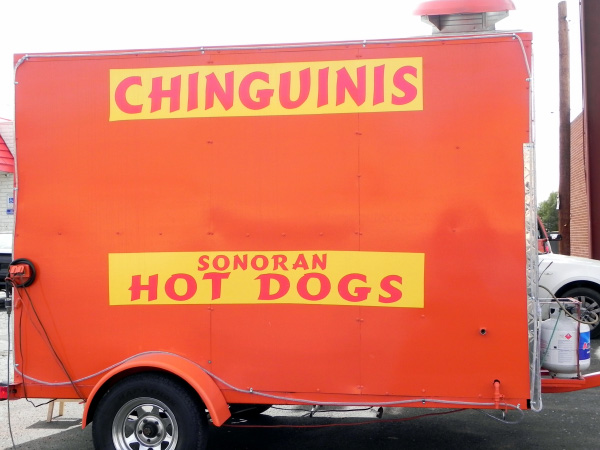 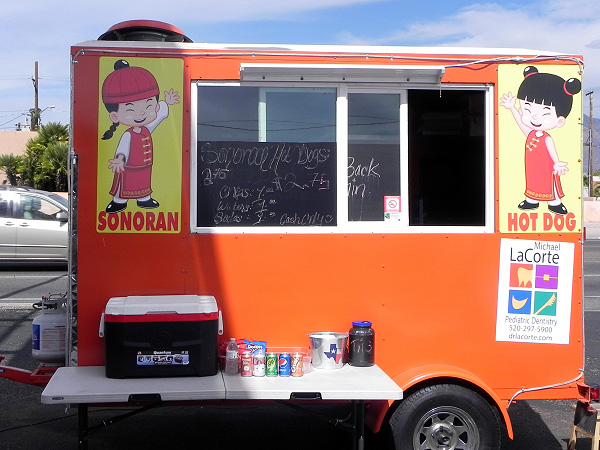 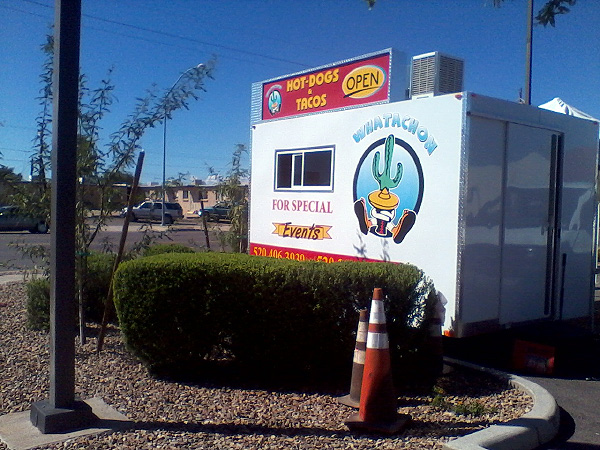 Hot dog cart with “sleeping Mexican” painting, 2017. The iconic “Sleeping Mexican” is either a source of pride or an derogatory stereotype, depending on how you view it. Listen to her interview with SFA’s Maribel Alvarez on the Saguaro Minute about the icon. Alvarez has collection of Sleeping Mexicans (on beer bottles, napkin holders, coasters, etc.), which is currently being catalogued. 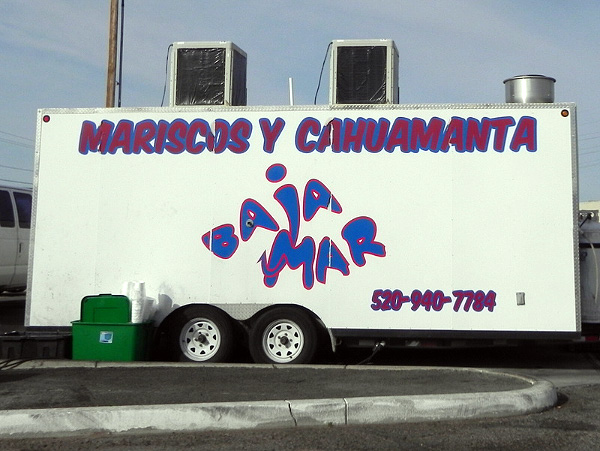 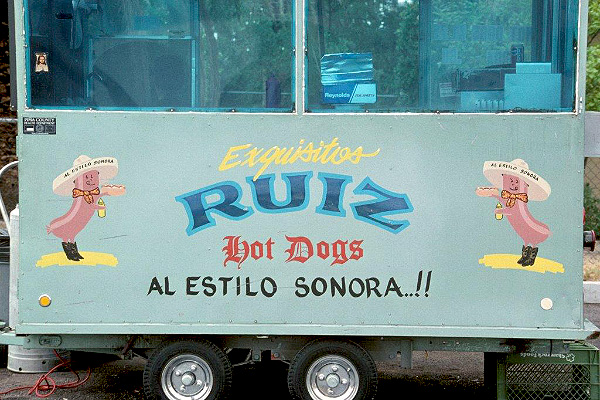 RUIZ HOT DOGS, 1995. My earliest image of a hot dog cart in Tucson. 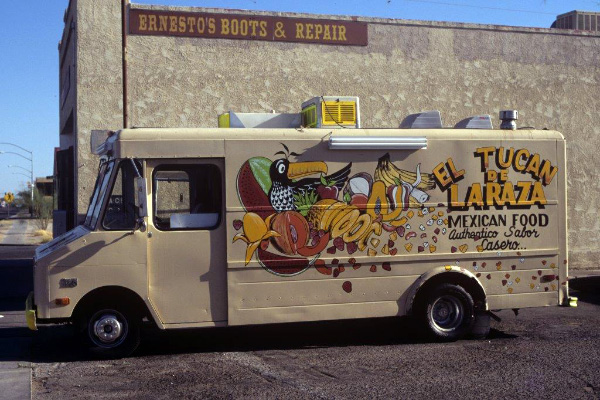 EL TUCAN DE LA RAZA, side view, 1986. There must be a non-ornithological slang meaning for this word, but I have not discovered it. The name “tucan” was given to at least one norteño band at about the same time. 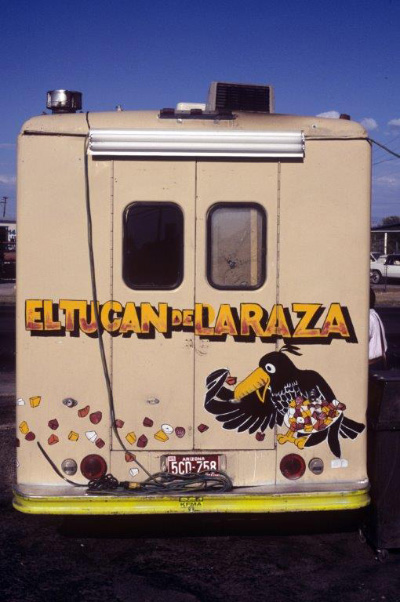 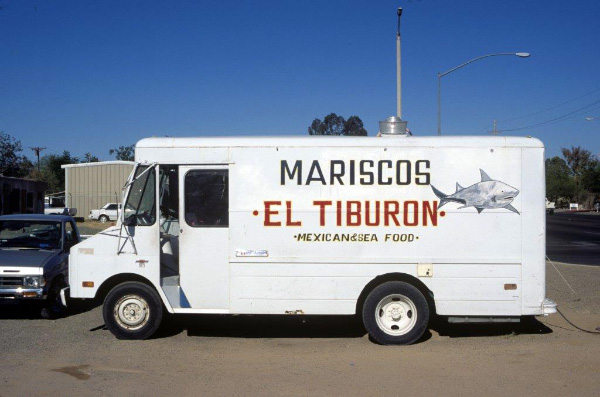 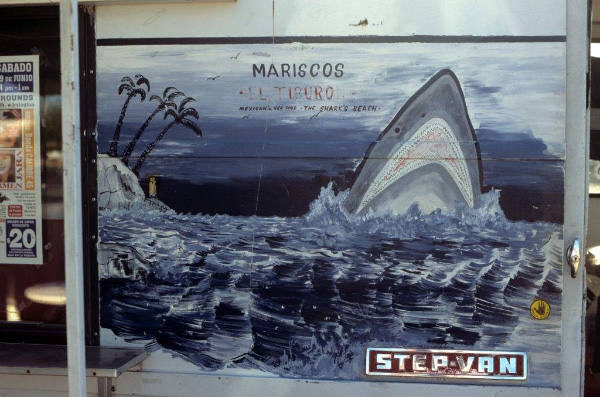 MARISCOS EL TIBURON, 1996. Painting of shark next to service window, customer side. 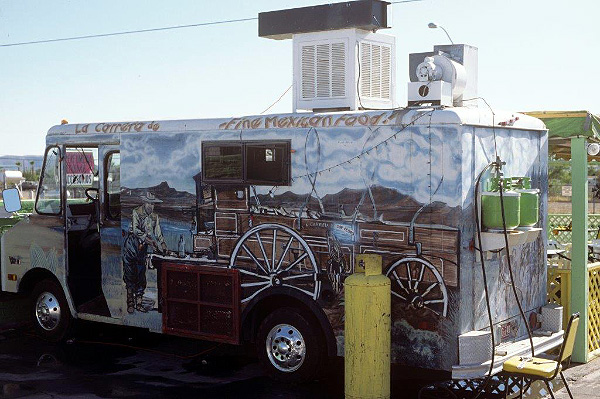 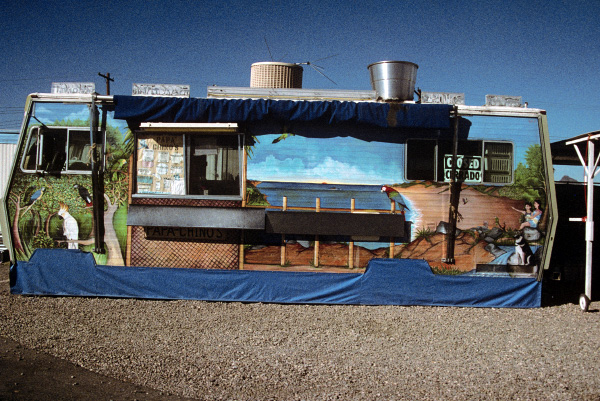