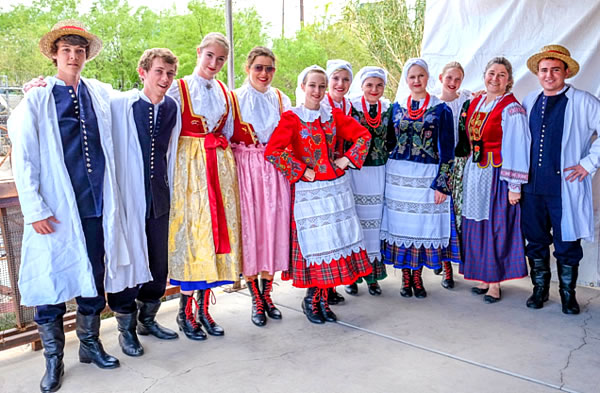 Those who attended the Southwest Folklife Alliance’s Polkas and Bread Diggin’ Deeper program and Tucson Meet Yourself may recall twirling circles of colorfully-costumed Polish dancers, who drew viewers into Polish culture and identity, with their steps and smiles. Joanna Schmit, director of the Tucson’s Lajkonik Polish Dance group, knows that being in contact with one culture’s dance both educates and entertains… and makes you wonder about other cultures.

According to Joanna, who also is Adjunct Associate Professor of Optical Sciences at the UA’s College of Optical Sciences, the Polish community began participating in Tucson Meet Yourself’s early years with a Polish Food booth. Then, she says, the folklife festival became a natural place and a motivation for sharing Polish culture not only through food, “…but also with the dances, costumes and music our kids were learning. It was also a great reward for kids and parents to share their knowledge and skills in front of a large audience,” Joanna notes.

“Now these grown-up kids are attracting non-Polish young people to the group, and are passing on Polish cultural traditions through the dance and songs,” says Joanna. The group continues to expand its own learning, by participating in the Polish International Festival in Poland, visiting different regions, and exploring history and culture from local experts.

Joanna’s childhood also reflected the connection between learning and cultural dance: “When I was young, I was a part of Polish dance group, Gaweda. In the late 1970s we performed not only in Poland but often abroad. We strongly felt that we were ambassadors of Polish culture to audiences, which consisted in big part of Polish people living in these countries. So one could say I grew up with understanding the importance of sharing the culture. Later when I married an American and moved to Tucson, I wanted to share my Polish heritage with our kids. I thought that the best way to do it was to get together with other Polish families, so that the Polish language and culture would become something more natural for kids. Teaching them about culture through dance, songs and poems was an obvious way for me. A few Polish families liked the idea and that is how the Tucson group started.”

Joanna notes that some Polish traditions are in jeopardy of being lost, like Polish paper cutting folk art. Tucson is privileged to have master wycinanki artist Madalena Nowacka-Jannotta continue her demonstrations of the traditional art at Tucson Meet Yourself and in special Polish community events. “We are lucky here to have two places that gathers Polish community, St. Cyril of Alexandria Catholic Church and the Arizona Polish Club, and we are lucky to have Magdalena Nowacka–Jannotta teach the tradition to the next generation.”

In addition to the community’s Polish Club and St. Cyril, the Polish Cultural Student Organization operates at the University of Arizona, organizing Polish language workshops and dance performances, and actively collaborating with other student associations on campus.

We’re always learning, says Joanna, who appreciates how other regional cultures including Mexican and O’odham also embrace the polka. “Tucson is a city rich in different cultures and always nourishing its development.”

Closing learning nugget: Although the polka is widely embraced in Poland, the dance did not originate in that country. Polka originated in mid-19th century Bohemia.