Cowboys are the folk heroes of American ranching tradition. Forty miles south and west of Tucson, down a washboard road, you follow several signposts to meet with one folk artist-rancher-cowboy who keeps the contributions of African Americans to these western traditions alive.

At 85, Ed Keeylocko still runs his Keeylocko ranch, a spread of 30-plus acres with 10 wood-tin buildings that form a Main Street-turned-art-installation-town. He checks the fences around his ranch of about 100 head of cattle and a couple of dozen horses, with the help of a few friends who double as trail bosses, ranch hands and cooks when needed. A Korean Army vet born in the Carolinas, Ed traveled the country after his Army career before settling in the Sonoran desert grasslands. He attended the University of Arizona, learning about agriculture, because he wanted to breed well-armed cattle that could protect themselves on the range. (“Give them back their horns,” he says.) After experiencing discrimination at a cattle auction, Keeylocko decided to create his own ranch. He bought the land and built his Keeylocko tin-wood town with his own hands in the 1970s, mainly because he wanted a working ranch to breed his cattle and horses. 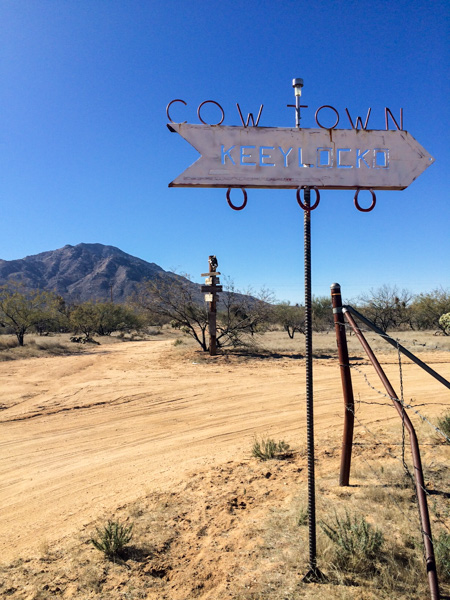 In speaking about black cowboy traditions and contributions to western heritage, he’ll tell you about the origins of the word, cowboy (“Little slave boys were herding cattle… they were the first to be called cowboys,” Ed says). He’ll tell you next about how black cowboy life tests you all the time, and give recognition to African-American pioneers who played a role in settling the early American western frontier. He references the research about the earliest cattle herding in the New World, in the 1700s, when Spanish conquistadores brought African slaves and cattle to the region. He talks about the rise of black rodeos in the 1960s and 1970s, and about Myrtis Dightman, a successful black cowboy of the 1960s who became the first black cowboy to ride bulls in the National Finals Rodeo. Ed also salutes Bill Pickett, the African American cowboy who was the father of bulldogging and used his teeth when wrestling a steer. In 1971, Bill Pickett was voted into Oklahoma City’s Cowboy Hall of Fame, the first African American to receive this honor.

There’s plenty of folklife and folk art character in Keeylocko’s tin-wood town, which Ed built himself: At the western corner of the main street is his Blue Dog Saloon; inside there are saddles, photos, ropes, animal heads and other memorabilia. Ed also has constructed a fort, a library, a general store (you can’t buy anything), a barn with pigs, a bank and a sheriff’s office. A few cowboys are buried in the graveyard.  Ed also has posted hand-lettered Cowtown “law” signs (no cussin’ or disrespecting) around his imaginative place. The public is welcome to visit Keeylocko, which has no facilities unless you are visiting during several weekend fests held annually (check the Cowtown Keeylocko facebook page). 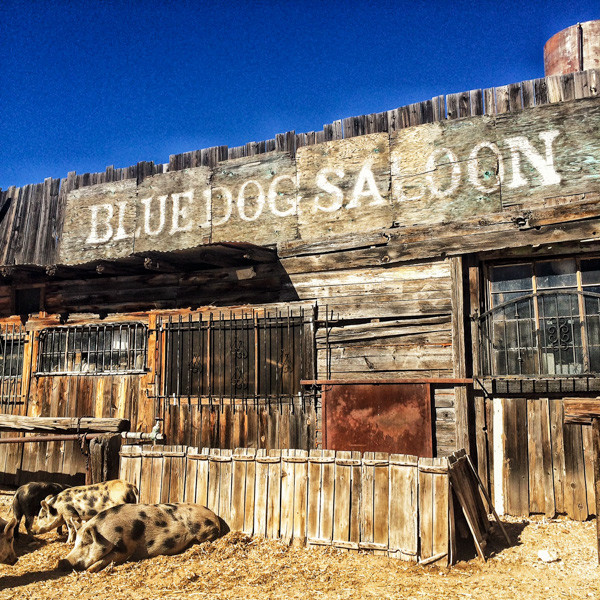 Mostly these days, the ranch-turned-folkart catches the interest of the unconventional; a number of music festivals, weddings and film productions are hosted each year. But most endearing about this handmade masterpiece town, is the authentic cowboy who spins his stories of ranching, livestock, ropes, saddles and African American lore.

2 thoughts on “Cowboy and Cowtown: Keeylocko”