In 2015-16, SFA Folklorist-in-Residence Nicholas Hartmann carried out an ethnographic study of the Nogales Produce Industry. The research was supported by the Archie Green Fellowship of the American Folklife Center at the Library of Congress. A monograph of his research is now available online. This is an excerpt.

Amidst the dramatic backdrop of Southern Arizona’s big skies, mesquite bosques, and saguaro cacti, lies an industry of major cultural, historical, and nutritional significance. Its warehouses line the southern stretch of Interstate 19, a highway that connects the town of Nogales, Arizona at the international border with Sonora, Mexico to Tucson. Names like SunFed, Farmer’s Best, Omega Produce, and Ciruli Brothers proclaim these family businesses, which reach north to the small town of Amado, where tomato glasshouses gleam from the roadside. 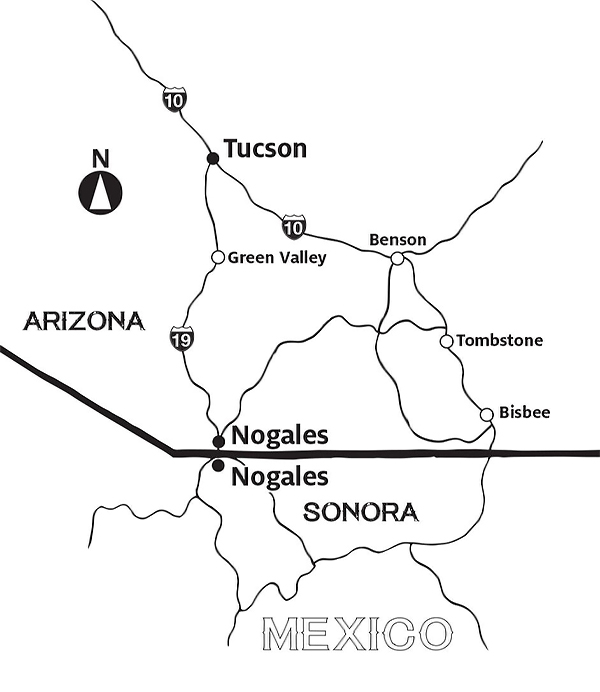 According to the U.S. Department of Transportation, in 2017, 333,941 trucks crossed the border in Nogales, hauling over $2.5 billion worth of fresh fruits and vegetables, making it one of the top three ports of entry. The produce comes mostly from the northwestern states of Sonora and Sinaloa. Some of that produce will have a short American journey, traveling just 33 kilometers north to a grocery store in Tucson. But most of it ends up beyond Arizona—in California and even across the Canadian border in Vancouver.

As a newcomer to the borderlands, I became curious about where my avocados, squash, and tomatoes came from and about what it takes to move Mexican produce on a day-to-day basis. I conducted fieldwork between August and December 2015 and interviewed 29 individuals. Most interviews took place in Nogales, Arizona or in nearby Rio Rico, where many historic produce operations have located for closer proximity to Interstate 19. The majority of my interviewees were male and over age 50. Several were in their eighties and nineties; a few were in their twenties. The majority of them headed their own companies or had retired from their family business. Many firms were multi-generational, and workers expressed pride in being able to continue the family lineage. While I was not able to interview as many entry-level workers or women as I would have liked, the existing study of brokers and distributors offers a glimpse into the industry.

Those who work to bring produce across the border are part of a historic tradition spanning over 100 years. Whether on the floor of a warehouse, as a sales manager, or a distributor, the working traditions within this industry are multi-generational, multicultural, and often familial. Like many other occupational traditions, produce work in Nogales is considered lifeblood for both families and the community as a whole.

My work explored how produce is transported, sold, and marketed, and chronicled stories of industry workers. Occupational narratives reveal how workers make sense of their own lives and experiences as well as help preserve local history and institutional knowledge. These narratives also expose larger public concerns such as food safety and local food movements. Overall, they provide a localized and community-based response to a global understanding of where our food comes from and how it arrives to us.

This paper highlights these narratives, focusing primarily on three areas: 1) the industry as a familial occupational tradition; 2) the role of trust in the industry; and 3) historic and current challenges faced by produce industry professionals and strategies used to overcome them. (Editor’s note: This excerpt includes selections from each.)

The produce industry in Nogales traces its historical roots to 1905, when the first rail cars of cantaloupes and tomatoes crossed the border from Mexico. Over time, the brokering, selling, and distribution of produce became an occupational tradition that now spans three generations of families representing a wide diversity of cultures.

The early Nogales industry saw multi-generational families of Hispanic, Greek, and Italian descent who remained involved over the course of the last century. Nick Gatzionis, a third-generation produce professional with CAB Produce, recalled his family’s heritage in the industry:

“My grandfather came from Greece. Instead of going to Ellis Island, they went down south toward Cuba. A lot of the pioneers of the produce industry here in Nogales went from Veracruz on the West Coast, and started growing in Culiacán, in Sinaloa, Mexico. And a lot of them are the immigrant families from Greece … who saw these fertile lands, and realized that there’s access to shipping.” (Gatzionis, Gatzionis and Valenzuela 2015).

Family ties in the produce industry were often extended by marriage. Walter Ram, Sr., a retired produce broker living in Tucson, recalled his work with his father-in-law’s operation, in which various family members took on different roles:

“A Greek by the name of Harry Georgelos had his brother go down to Culiacán and grow tomatoes. He had a sales office here in town, Nogales, and there he would sell them. But at that time, it was a lot different. Today everybody’s got a warehouse. At that time, they had just an office, no warehouse, no workers, nothing. Just an office with a salesman and a secretary. And they sold their tomatoes by telephone. If they happened to get in, say, five cars of tomatoes at a time, which was a lot at that time, they would sell maybe one or two cars, and then they had to move the other ones because tomorrow they would get some more. So what they would do, they would roll them open without sales, mainly to Kansas City, which was a staging area with ice and instructions for the road. Ice in Nogales, ice in El Paso, and so on. And then as they sold it, they would divert it. They would go to the railroad company here in Nogales, and they’d put in a diversion order to ship the car going to Kansas City, get it and ship it up to Denver, or ship it up to the Carolinas, or wherever they happened to sell it at.” (Ram, Sr. 2015).

The Nogales fresh produce industry quickly became industrialized with streamlined production and distribution methods. However, much of it remained rooted in traditional forms of practice based on informal vernacular education and community-based reciprocity. This is particularly true for the industry’s financial and trade dealings.

According to Robert Alvarez, Jr.’s 2005 study of trucking and the borderlands produce industry, Mexican shippers, or comerciantes, “draw on and elaborate a cultural repertory of interpersonal relationships, including that of confianza (trust) … as a means to secure relationships of loyalty with workers, other comerciantes, and even the North American buyers with whom they do business” (Alvarez, Jr. 2005:50-51).

Anthropologist Carlos Velez-Ibañez defines confianza as the “willingness to engage in generalized reciprocity,” which involves a verbal agreement between many parties.

This confianza lies at the heart of the Nogales industry, inherently tangible, as Maribel Alvarez points out, yet not always acknowledged in “official” accounts of the industry:

“…embedded in each transaction—yet nearly impossible to capture in official reports—is another form of exchange equally and, arguably, more important than any cold cash at stake: the tenuous and fundamental sense of trust—confianza—that what is expected to happen will happen when it is supposed to happen.” (Alvarez 2012:32-33).

For retired sales manager Jerry Wagner, trust was always a critical part of the industry. He “could wake up in the morning, and pick up the telephone, and by word-of-mouth, sell $4 million worth of produce and say, ‘Okay, bye,’ and hang up the phone, and never see a paper trail. It is such an honorable business in that, if people don’t trust you, you go broke” (Wagner 2015).

“When I was going to school in Los Angeles, when I’d come down home, anyplace that I could make a dollar, I’d do it. My brother had a couple of trucks. He had a load of watermelons that he was taking to El Paso. I don’t know where he got them from, but he was going to El Paso. So I volunteered to drive the truck. I didn’t know how to drive a truck. I volunteered to drive the truck because he was going to pay me, I forget what it was, thirty or forty dollars, and to me, it was a lot of money. So I took off. The truck didn’t have air brakes, it had vacuum brakes. I went to Tucson, fueled up then took off for El Paso. No freeways or nothing like that. The truck had hydraulic brakes, they didn’t hold anything. The trailer had a little handle for the trailer brakes. At one o’clock in the morning, I went to try my trailer brakes, and I had no brakes. So I had developed somewhere along the line a leak, and there wasn’t vacuum anymore. I thought of jumping out, but I was going too fast and it was pitch black. I’d probably kill myself, so I figured I’d ride it down. And luckily I knew how to get through Benson. You had to make a right turn, and a left turn, and go under a bridge. If you went straight, you would hit a railroad embankment. And if I were to jump that curb or whatever, and I had that embankment, the watermelon load would come up and crush me. So I had no choice. I had to try and make the turn. I could feel the truck tilting, but I couldn’t straighten it out. The only way I could straighten it out was to go straight. I couldn’t go straight. So I kept on going, going, going, until finally, wham! It went on its left side. It went sliding almost down to where it started going under the bridge. It blew the top of the trailer off completely. It blew all the watermelons off. Me, I was hanging onto the steering wheel, and the door opened. If I had gone out through that door, you know, I would have been made sausage.” –Walter Ram, Sr., recalling a 1949 truck accident

Part of selling, distributing and promoting produce requires a willingness to not only trust others in the industry, but also accept the risks that come with the cultivation and transportation of produce.

Outbreaks of foodborne illness, especially those coming from fresh produce contamination, pose a continuous challenge for the industry. Food safety affects both individual businesses and the industry as a whole. Many brokers, distributors, and others noted that food safety regulations and inspection have become more stringent over time.

Walter Ram, Jr., whose father recounted that harrowing truck incident above, is food safety director for a grape company based in California and Arizona. He remembered a time in which produce handling was more lax:

“When I was a boy, my dad had, among other things, snow peas, sugarpeas. The buyers would come in, look at these 40-pound crates, throw them on the warehouse floor to inspect them make sure that there wasn’t any subpar peas on the box. Then they would put the peas back in the box. They would go crate by crate, and do a whole bunch of them like these. Of course, you’d never get all 40 pounds back in the crate, for one reason or the other. They’d buy those and all the rest of them. Well now, I would never think of throwing something on the floor and selling it as a food product. So our industry’s really gotten more professional.” (Ram, Jr. 2015)