Chanukah: The Triumph of Light and Tradition

Celebrating the miracles of light and victory are the central tenets of Chanukah, a Jewish holiday that honors the triumph of Jewish people against persecutors. Also known as the “festival of lights” Chanukah begins on the 25th day of the Jewish month of Kislev, which this year falls on Dec. 24, and lasts for eight days.

Lisa Schachter-Brooks, the director of operations at Tucson’s Jewish History Museum, explains that the holiday commemorates a historical event in the second century B.C., when a Jewish temple in Jerusalem fell under control of the Syrian Greeks. Jewish warriors known as the Maccabees fought back and miraculously won.

“Chanukah means ‘dedication,’” Schachter-Brooks said. “The Maccabees re-dedicated the temple. They had to clean it and make it holy again as it was covered in pig grease from the Greeks’ sacrifices,” she said.

When they went to re-light the candelabra, there was only enough olive oil to keep the light burning for one day. Miraculously, the oil lasted for eight nights, long enough for them to replenish the supply.

“The holiday is really about maintaining traditions in the face of assimilation,” Schachter-Brooks said.

While Chanukah is not as significant of a religious holiday as, say, Rosh Hashanah (Jewish new year) or Yom Kippur, it has become popular, in part, due to its proximity to Christmas, Schachter-Brooks said.

Some elements of Chanukah’s material culture and culinary tradition include:

The menorah is the traditional Chanukah candelabra. It contains holders for 9 candles, one for each night of the festival and one for the helper light or “Shamash.” Each night an additional candle is lit, accompanied by special sayings in Hebrew, such as, “Blessed are you the creator… who has performed miracles for our ancestors on those days in this time.”

One of the Chanukah commandments is to advertise the miracle, Schachter-Brooks says. “So the custom is to place the menorah where your neighbors — Jewish and non-Jewish — can see it, usually in a window.” 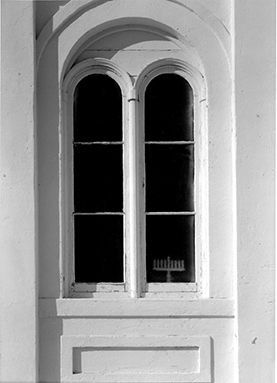 Fried foods are traditionally cooked and served on Chanukah to commemorate the miracle of the oil burning in the menorah for eight days.

The dreidel is a special top for children. Each of its sides are inscribed with the Hebrew letters nun, gimmel, hei and shin, an acronym for Nes Gadol Hayah Sham, “a great miracle happened there.” Children spin the top and wager on where it will fall using coins, chocolates or other candy.

Gelt is the Hebrew word for money. Chanukah gelt refers to chocolate coins wrapped in gold foil given to children during the holiday.

Tucson’s Jewish History Museum also aims to bring to light the story of Southern Arizona’s Jewish community. It does this through educational programming and exhibits about Arizona’s Jewish pioneers. “There has been a significant Jewish population in Tucson,” Schachter-Brooks said. “Since the 1860s they have been central to the development of the city as merchants, philanthropists, and even mayors.”

The museum is located just south of downtown Tucson in a 1910 building that housed the first synagogue in Arizona, called Temple Emmanuel. Over 12 churches have used the space and for a time it housed a Spanish radio station, Schachter-Brooks said.

The building was used until the 1940s when it was abandoned. Tucson’s Jewish community saved building in 1990s and the museum opened in 2008, Schachter-Brooks said.

The Museum shares a campus with the Holocaust History Center, which opened in February of this year.