Bread and Puppets and Transformation

In the early 1960s a puppet theater in New York City began creating small productions to address local issues — everything from fair housing to rat infestations. At performances they served fresh, homemade bread to their audiences on the idea was that art should be as central as bread to human life. They called themselves Bread and Puppet.

We give you a piece of bread with the puppet show because our bread and theater belong together. For a long time the theater arts have been separated from the stomach. Theater was entertainment. Entertainment was meant for the skin. Bread was meant for the stomach. The old rites of baking, eating and offering bread were forgotten. The bread became mush. We would like you to take your shoes off when you come to our puppet show or we would like to bless you with the fiddle bow. The bread shall remind you of the sacrament of eating.”

In time the company’s puppets grew larger and larger, and they became known for their “big head puppets,” which appeared in the streets, often at protest and rallies against the Vietnam War, on behalf of Central American refugees seeking sanctuary, and other causes.

For the past five decades, Bread and Puppet has influenced artists, activists, and puppeteers all over the world, including several in Tucson. 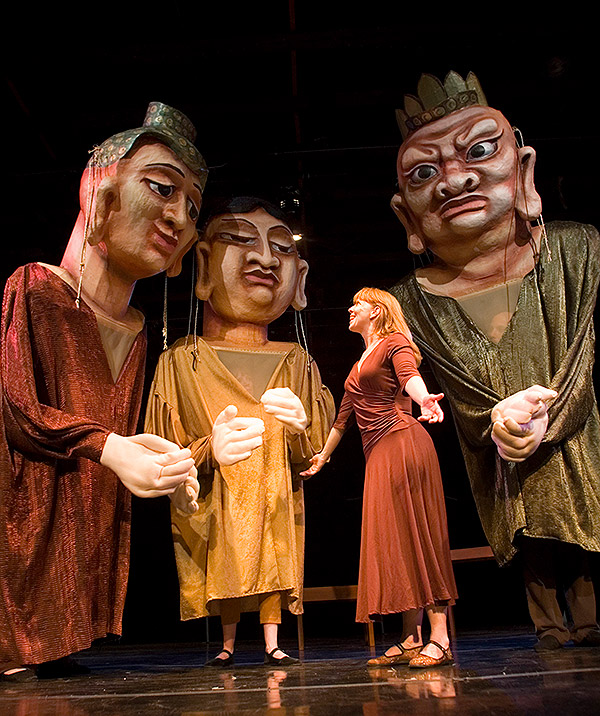 Amplifying voices and connecting with audiences

Tucson puppeteer Susan Furr grew up in Washington, D.C. and remembers Bread and Puppet from many political actions. “They were a figure in all the marches,” she said.

Furr made first puppet-like figure in 1984, when she was in her early 20s. It was an effigy representing a real estate company that was displacing of people from a housing project. Effigies often represent the “enemy” in protests and are sometimes dragged through the streets or burned or hung, she said.

“It was amplification of my voice and my sentiment. I lived in those apartments and I was getting displaced,” Furr said. 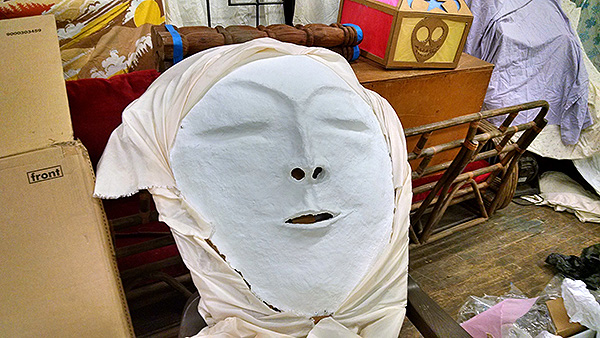 Furr says she probably would not use an effigy for expressing her feelings today because she is committed to non-violence. “Especially when you can use big heads or stage puppets to parody politics through visuals or scripted theater, which is more interesting anyway.”

Matt Cotten came to the University of Arizona to study painting. In the early 1990s he saw a video of Bread and Puppet and was inspired by the troupe’s materials, methods, and their orientation towards community interaction. “It seemed like such a delightful artform, with universal appeal for everyone from little kids to adults — every walk of life.  I also liked the agitprop political edge that it had,” Cotten said.

Seeking a more direct connection with audiences, he added puppetry to his creative practice in the early 1990s. He started experimenting with new materials, making large-scale puppets and bringing community members together in a collaborative creative process.

Cotten was active in the environmental organization Earth First! working on behalf of the red squirrel on Mt. Graham. But he started to feel that the megaphones and signs were ineffective. “I felt like that was more alienating than unifying. I saw Bread and Puppet using theater as a way to create spectacle without being preachy. It was entertaining,” Cotten said.

Cotten was friends with a “ragtag group of musicians” as well as fellow puppeteers, and they formed a group called Big Head Puppets. “We were interested in telling stories the way Bread & Puppet did — non verbally, with the visuals and the music — to create new rituals, not just activism,” Cotten said.

Early on they joined several Tucson traditions such as the St. Patrick’s Day parade and the then-fledgling All Souls’ Procession.

Cotten later formed Tucson Puppet Works and rented a storefront on Congress Street, which housed puppet troupes and a gallery, and also served as a gathering place for the All Souls’ Procession, Cotten said.

“The procession felt like a parade of giant puppets for many years,” Cotten said.

They are still an important presence in the annual procession.

Several years ago Furr worked with sculptor Mykl Wells during the event’s public workshops to make her first big head puppet. The puppet was a representation of a woman grieving the loss of bees to bee colony collapse and the future possible loss of food crops. 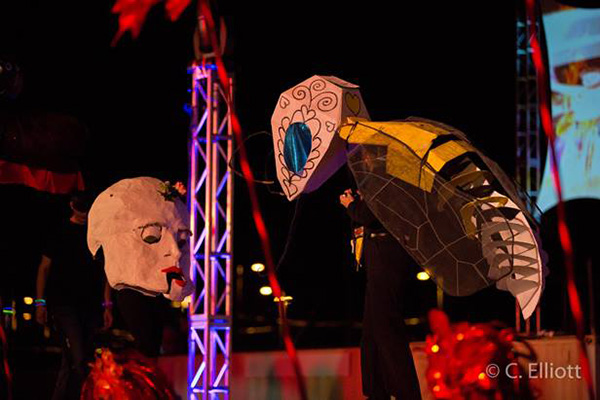 Other Tucson puppeteers include Cotten’s long-time collaborators Eric Wagner and Charles Swanson. Tucson artist Jhon Sanders organizes the annual Procession of Little Angels and LumiNight, a winter solstice procession using light and lanterns to bring warmth to the streets. In recent years Borderlands Theater has used big puppets as well as shadow puppetry in is productions.

In addition to Bread and Puppet’s concept of ritual and protest, Cotten was also drawn to the troupe’s puppet making methods. “They were using recycled materials and flour. Flour to make puppets and also to make food. And I thought what a beautiful cycle. It was a consistent vision,” he said.

Cotten says flour is a strong material—mixed with water it makes a strong glue. But he doesn’t use it anymore. “The mice love it just as much as we do. To them the puppets are bread,” he said, adding that Bread and Puppet has somehow been able to preserve their puppets well in their barn. (In the mid-1970s the Bread and Puppet moved from New York to rural Vermont and turned a centuries-old barn into a puppet museum.)

Tucson’s collection of big head puppets have seen many lives beyond annual All Souls Procession. 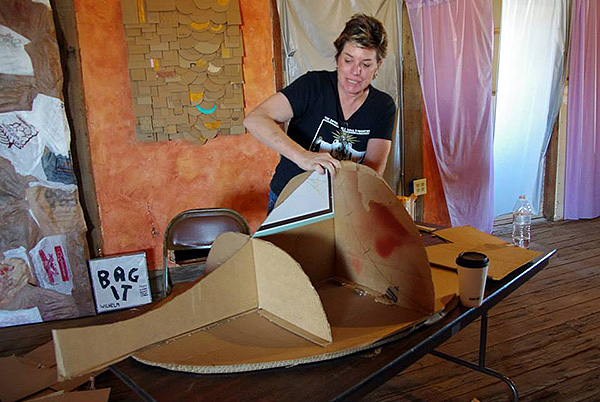 Susan Furr getting started on her big head puppet. Photo by Susan Tiss.

Furr’s big head puppet has undergone several makeovers, she said. “She is well constructed, with moving eyes and a moving mouth. She’s made to be worn over your head and sit on top you with your skinny legs out the bottom. You operate it from inside.”

The puppet head was recently used by scholar Diane Daily in a protest of “Ni Una Mas,” bringing attention to femicide in Mexico.  “She clothed it so it looked like a Mexican girl,” Furr said.

There are current plans to reincarnate the puppet as President Donald Trump, Furr said. “When the mouth opens and closes I imagine there’ll be weird things that spew out, like fog.”

But Cotten didn’t always want to preserve or re-use his big puppets. “The materials are really good for burning. I was just a much into the destruction of the work as the creation of them,” he said.

Influenced by the anarchist writer Hakim Bey and the concept of “Temporary Autonomous Zones,” Cotten became interested in the ephemeral quality of art and the concept of ritual. He saw that big head puppets could temporarily transform perceptions of the city in downtown Tucson.

“The most exciting thing for me whether it’s a rally or a political march or the All Souls’ Procession is that we are repossessing our urban space. It’s no longer about just the efficiency of getting around, people in cars. We are redefining that space as part of our home. It’s a space that we can do more than just drive on.” 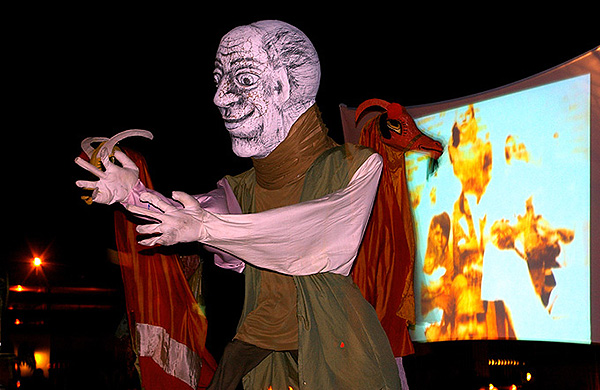 When participating in such a ritual or rally or procession, Cotten said, “It’s like the whole town becomes a puppet. If you’re in the parade, you look around and say where am I? Oh yeah this is the street I drive down once a day but somehow it feels different.”

Puppets, especially big ones, are the “ultimate conduit” for that transformation because they help change the scale of the environment, Cotten said. “A familiar space becomes new and fresh because the perception of scale has changed. The street becomes a stage. We can transform it with a beautiful act.”

Before and After Bread and Puppet and After

Tucson puppeteer Susan Furr says puppetry has always been an artform for “the people.” “Puppeteers would rove around the countryside and set up their little stages and convey news from other regions for the people of the villages.”

In communist Russia, puppetry was sanctified as one of the four allowable artforms, along with ballet, opera, and the symphony, she said.

In the United States puppetry historically has been thought of as an artform for children, but has been recognized by arts and cultural establishment in recent decades. Puppeteer Basil Twist, known for his abstract puppetry and theater, was named a MacArthur Fellow in 2015, for example. That same year, Cotten created 20 puppets and masks for an off-Broadway production of The Little Prince, performed at the Pearl Theater in New York by Hang a Tale Theatre, which integrated live action, puppets, music, video, and acrobatics.

Furr recently started the Tucson Puppet Arts guild, now called the Tucson Puppet Project, to pull together people interested in all aspects of the art form from script writing to building to puppeteering. “The membership waxes and wanes. But we’ve been able to produce a few shows and we have a lot of fun learning about puppetry and share our knowledge in collaborative style,” she said.

Furr is currently working with the traditional puppet characters of Punch and Judy to parody today’s political situation. Punch and Judy shows tend to be outrageous, vulgar, and comedic.

“In this new scripts President Trump is rying to recruit Punch to his cabinet. Hopefully it willprovide some comic relief to times that we’re living in right now,” Furr said. “There’s nothing more satisfying than a little slapstick and bawdiness.”

Furr’s show takes place on March 5 at 3 pm in the Steinfeld Warehouse.

Cotten acknowledges the strong Mexican tradition of street theater and puppetry and its influence throughout the borderlands. “There are so many parades and pageants in Mexico that include sacred altars with Paper-mâché figurines and all kinds of puppets in Mexico.”

Bread and Puppet Theater continues to tour nationally and internationally. The company also sells prints and publications amplifying messages of peace and community.