Border Tuner: An installation to amplify and illuminate border voices

Story and photographs by Kimi Eisele

The first thing I saw were lights in the sky, the kind of lights that fan the night to announce inaugurations for new buildings or big car sales.

But this wasn’t any kind of grand opening or sale. It was an art installation: Rafael Lozano-Hemmer’s Border Tuner, which spanned a stretch of the international border between El Paso, Texas and Ciudad Juarez, Mexico for 12 nights in November.

To participate, all I had to do was show up in El Paso, in a parking lot next to Bowie High school, stand in front of a microphone, and turn a dial to direct a beam from one of the spotlights to intersect another beam in the sky. Once they connected, the line was open, I could speak to someone in Juarez.

A man’s voice answered. “Samuel,” he said. From France. We communicated in Spanish. He was on a work trip. Me too, I said.

We were just two people from different countries, talking in the dark, except for the light above our heads. It was simple. But profound.

Every day, thousands of communiques are transmitted across this borderline by those who can travel across it, by telephones and wire services, by television, or, in places, between slats in the wall itself, voice to voice, hand to hand. Border Tuner aimed to amplify that constant connection.

It would have been easy for it not to. The borderlands are ripe grounds for opinions, ideas, and narratives imposed from the outside–stories that oversimplify life here and lean too often toward violence and hardship, stories that miss the fuller picture.

I met Lozano-Hemmer at a shipping container-turned-tech-booth on the El Paso side of the installation. “The border has a very divisive and adversarial feel,” which is partly what drew him to the region, he told me. He sees the border reality as part of “the dire global migratory problem” brought on by colonialism, war, corruption, and the climate crisis, he said. The work of an artist is to “accept the challenge, to turn around and say, how can I contribute?” he says. “How can I put a spotlight somewhere else?”

For Lozano-Hemmer, that spotlight was quite literal. He set up six stations—three in El Paso, three in Ciudad Juarez—each equipped with a lectern and microphone, speakers, and three robotic searchlights. The lights were reminiscent of military equipment—anti-aircraft searchlights or Nazi “architectures of intimidation”—and of lights used by the US Border Patrol and private vigilante groups looking for migrants crossing the border. But instead of pointing down, making people feel small, they were pointing up and across, like light bridges over the border.

Which is what Lozano-Hemmer’s art often does—it takes the infrastructure of technological surveillance and flips it upside down.

A blend of electronics, architecture, performance, and public participation, Lozano-Hemmer’s works use technology to create spaces for human interaction and inquiry. His pieces range from small (but technologically complex) gallery pieces such as a 3D speech bubble created by converting exhaled breath into a 3D shape then printed in stainless steel, to large-scale projects like a 2008 installation created for the 40th anniversary of the student massacre in Tlatelolco, Mexico City, called “Voz Alta.” In that piece, participants spoke into a megaphone mounted at the site of the massacre, their voices activated search lights that relayed their syncopated speech as flashes across the city. The public could tune into a radio station to hear what participants were saying. As such, it offered participatory reflection on state violence.

Border Tuner feels like an evolution of that work, this time using voice-to-voice contact across an international barrier—its own kind of state violence—to reveal intimate exchanges, from the mundane to the meaningful, that make up our daily humanity.

“To me, it was really important to make an art work that acknowledged that military history and then try to invert some of the power narrative, so that the power is not applied top down, but bottom up,” Lozano-Hemmer told me. “If those lights are moving, if they’re glimmering, it is because someone is activating them.”

One of the people activating the lights was 24-year-old Erick Romero, a pharmacist in El Paso. He stood in line at one of three microphones in the installation hoping to connect with Daniel, in Juarez, who he’d met a few weeks ago at a bar. Daniel doesn’t have a visa, Erick told me, so he can’t cross into the US. And while Romero can go to Juarez, and the two can text easily via WhatsApp, they thought it would be romantic to connect through Border Tuner.

The exchanged small talk, and at one point, Daniel’s voice bellowed through the speakers, “Me encantas,” (Spanish for “I adore you”). The small group that had gathered to listen let out a round of “Wooooo!” Soon, they were chanting “Beso! Beso! Beso!”

Lozano-Hemmer, who was born in Mexico and now lives in Canada where he attended university, admitted he had his own romantic and idealistic notions about the US-Mexico border. When he first started traveling to El Paso and Juarez from Montreal, he came with “a bunch of things to say,” he said. In time, however, through those visits, meeting artists and local historians, he says, “I realized that this is not a place to come and say things. It’s a place to come and listen.”

To prioritize local voices, Lozano-Hemmer enlisted a team of local curators—Kerry Doyle from the University of Texas El Paso’s Rubin Center for Visual Arts, León de la Rosa from the Universidad Autonoma de Ciudad Juarez, and El Paso artist Edgar Picazo. Collectively, the team curated a series of community forums held every night of the installation’s duration. Local artists of all ages were invited to “activate” the tuner each evening. One of the nights I was there, youth mariachi bands from local high schools on each side of the border serenaded one another through the microphones. Another night, lucha libre wrestlers came together to exchange stories.

Community forums provided a space for local organizations, artists, scholars, and community members to present work related to public art and life on the border.

“We wanted to create a series of conversations that reflected the complex and nuanced border reality that people here are living and from a variety of perspectives,” Doyle said. Such conversations covered topic including art, gender, literature, indigeneity, technology, LGBT+ issues, and more.

Curators considered the fluidity of life in these two cities, where “transfronterizos,” or people that move between both places, as well as the presence of the barrier, in their curation. Doyle said. Like other cities and towns along the US-Mexico border, El Paso and Juarez are closely connected. “More than 60 percent of people in both cities have family on the other sides of the border. Many people live and work across the border every day.”

At the same time, she said, “This is not a piece that seeks to look away from the fact that the border is still a divider. There is a very strong reminder of that right now with migrant families that are camped out at either bridge [in Ciudad Juarez],” she said.

While the installation was set up similarly in both cities, each side had its own qualities. The El Paso side used a parking lot next to Bowie High School, where 40 percent of the students come from Mexico every day, Doyle said.

On the Juarez side, the installation was staged in Chamizal Park, where the community forums drew a core group of 10 to 12 artists and community members every night, Doyle said. “Themes brought up on previous nights, people referred back to–it’s a lot about local and international and concepts of the border. It’s become an active ongoing conversation. I think that creation of spaces has been a really important thing.”

The installation in Juarez also drew an informal economy of vendors. “We’ve got the guy selling elotes and someone selling burritos. Last night, there was a mobile creperia,” she said.

One evening I heard people from Juarez asking people in El Paso if they were eating tacos, too. “We don’t’ have any tacos,” someone from El Paso said.

“Want one?” the Juarez voice said.

And this, Doyle said, is the heart of the piece. “Leaving it open to the public to say and do what they want.”

One evening, in a cold Texas drizzle, I listened to Cassandro (aka Saúl Armendáriz), the El Paso-born exótico, a lucha libre fighter who performs in drag, share a story over the microphone about the Río Grande. He recalled childhood birthday celebrations along its banks. “It was the best pool. Even though the water was dirty, the color of chocolate, it was so wonderful to be able to swim in the river,” he said. But the river also had its duality. “That water is also turbulent. One day, the current carried my uncle away, and he drowned. And that was the sadness of the river.”

Such contradictions are part of life anywhere but come into relief in a region where international politics divides people and culture. 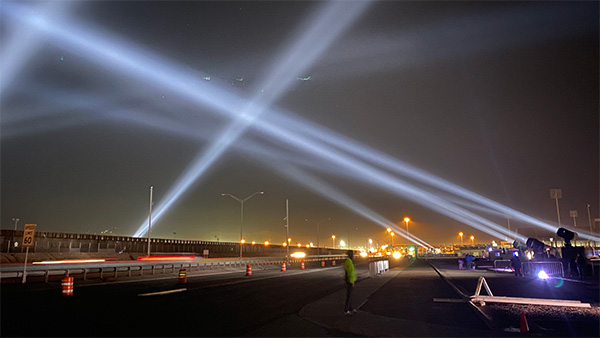 Lozano-Hemmer told me the lights help create a sense of “continuous landscape” across the border. “There’s so much darkness. From the migrant humanitarian crisis to the femicidios in Juarez to security and drugs and so on,” he said. “Let us make a decision that art can try to interrupt those narratives and create temporary zones of interaction and connection.”

Daniel responded first. The sound of a kiss arrived from Juarez through the large speakers next to where Erick stood. The small crowd cheered, Erick laughed, then sent a kiss back.

While it could not erase the reality of the border wall—there it stood beneath the lights every night, and there it remains—Border Tuner gave people a chance to communicate above the wall in a novel and playful way, reminding us of what human voices can do, and what can come from being heard.