A Bakery on Every Corner: How a Middle Eastern Bakery Brings the Tastes of Home to Tucson

Ari Baban, owner of Za’atar’s Mediterranean Restaurant in Tucson, is Kurdish from Northern Iraq. He came to the United States fleeing Saddam Hussein in 1997 with his mother to join his sister, who later passed away. Ari and his mother opened a small restaurant, which helped him learn the business. Three years ago he opened Za’atar’s, a small restaurant and bakery. The restaurant has an in-house oven and bakes over eight different kinds of breads and sweetbreads.

BorderLore talked with Ari about the tradition of baking bread in the Middle East and his role as a restaurant owner in Tucson. 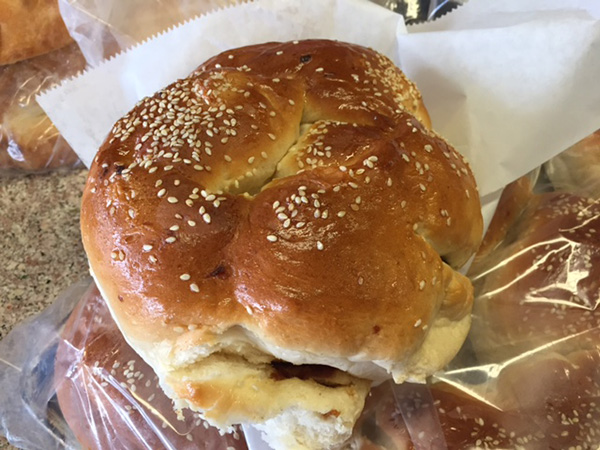 BL: How is bread part of the culinary culture of the Middle East and how have you replicated that at Za’atar’s?

AB: Most of Middle East — Lebanon, Syria, Jordan, nations along the Gulf — all eat bread and buy bread daily at the bakery. Fresh bread is part of the culture in Middle East. Every morning someone wakes up early and goes to the bakery to get bread, and then goes back, sometimes two or three times a day. Fresh bread is a must.  We eat it with every meal.

My oven was a pizza oven I brought from Phoenix. The shell of it. I had to build the inside to fit our needs. It’s gas, with stone all around. It’s very similar to what we used back home.

The oven is called a “furn.” You see them on every corner. Every neighborhood has two or three of them. And you’ll go back and forth there on a daily basis. Whoever doesn’t go to the public bakery has an oven at home specified for that. Baking bread is part of main culture. 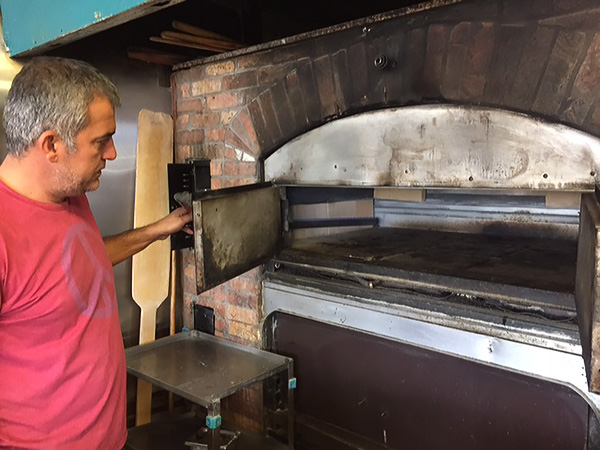 Ari Baban and the oven at Za’atar’s Mediterranean Restaurant.

People sometimes come in here to Za’atar’s and say, “You should expand or make it look different.” But this looks just like a little bakery somewhere in the Middle East. We make fresh bread and food right here.

Our facility is small. We try to keep it simple. But we make a large variety of breads. We make everything from scratch.

BL: What are some of the breads and sweet breads you make here?

Date bread. Date bread is kind of street food. People walk around with a big tray of it on the streets. Nutrition-wise, it’s a good value because it’s inexpensive. It has dates inside, so it’s a meal. It keeps you going for the day. You can grab one for a little money, and the guy keeps going back to the bakery every hour to refill the tray. And nobody ever asks, “Is that gluten free?”

Pocket pita. Everyone knows pocket pita. It’s something you see everywhere. Even in Israel pocket pita fresh is made daily.

Samoon. It’s an Eastern European word. Samoon is a basic table bread or sandwich bread, like Panini. Most of the Middle East it’s used for sandwiches. Here we make it twice a day.

Flat bread. Flat bread is the traditional bread from Iran and Iraq. It’s eaten at different meals or sometimes for sandwiches.

Barbari. Barbari bread is Iranian. Alexander the Great was passing through Iran. He got a wife in Iran and his army was with him making this kind of bread. It is a thick bread, like table bread. You slice it and serve it cheese and butter or yogurt.

Za’atar pie is a flatbread covered with za’atar, a spice blend from Lebanon and Syria, a mix of thyme, oregano, other spices. You eat it with Greek yogurt and bread.

Cheese pie is topped with a blend of sweet Syrian cheese and black caraway seeds.

Are there any special tools you use?

AB: We have a roller. And a long wooden peel for putting bread in the oven. I made it myself, of wood.

Samoon bread has to set in a wooden crate, not a plastic one. So we have that also. The plastic doesn’t allow it to breathe.

Who are your customers?

The bread list and the hostess at Za’atar’s Mediterranean Restaurant.

AB: We make bread for individuals and businesses. A lot of people buy it to make sandwiches. We have a large response from different cultures. A lot of people from Israel buy our bread. They love it that we have fresh bread that they can take home.

Several of our customers come early in the morning, way before we’re open. They bring a container; they know the price. They go to the baker and get the bread and give him the money. It’s a habit for them.

We have people from religious groups as well. We cater for the Jewish Community Center, for example.

BL: Where did you learn to cook and bake?

AB: I learned cooking from my mother. I am still learning. Cooking and baking is an ocean. Everyday you learn something. Everybody has their own tricks.

One of the things about our culture is that we get used to special tastes. My mom’s cooking was a certain way. Even my sisters couldn’t cook like my mom. I just wanted hers.

Some people come in and say, “Oh, that’s just like my mom’s cooking.” Others say, “That’s different.”

Everyone makes food differently. They have their own touch and that makes it unique.

BL: Who are your bakers and where did they learn the skill?

AB: Bread is very tricky. You have to know what you are doing. Some of my bakers were bakers in Iraq. The rest we teach.

I have two bakers for desserts, two for the breads, and three others for the meat pie and cheese pie. I have a baker who comes at 5 o’clock in the morning and another one at 3 o’clock.

Majdi, a new baker at Za’atar’s.

Some of my bakers are new. Majdi [PHOTO] is a student who comes one or two times a week

He is a new refugee from Syria. He is Kurdish. He learned baking here. We taught him.

Musel has been here for two months. He doesn’t speak English yet. He is Christian from Iraq. When ISIS went into Iraq he and his family survived.

BL: You are active in the refugee community here. In what ways to you help people new to Tucson?

AB: When newcomers arrive, I make a gift package for them. Some people, when they get here, are excited about a different culture, so they first thing they do is go to MacDonald’s. But eventually they come here too.

A lot of the refugee women, when they come here, they don’t have many skills. The only skill most have is cooking. Some go beyond that with sewing ad artwork. But many women in the Middle East are housewives.  Cooking is the big job and they cook for large families and there are always visitors. For them it’s easy to cook for large amounts of people and they do it well.

So when they come to the U.S., there are no other jobs available to them.

Even for people with advanced degrees, it is difficult. You have to start somewhere. So we try to help as much as we can.

I try to tell people there is more in the Middle Eastern culture than what they know through the TV. We are normal people making a living. We want to be a good part of any society.

BL: Do you use any specific recipes?

AB: We teach by showing.  The oldest recipe in the world was created by Kurdish people in Northern Iraq. But there is no written recipe. My mom never used recipes. She just knew exactly how much to use. You see slight differences in the product, depending who is baking, but that’s part of it.

If you go to Subway you expect the same thing all the time. But that’s because the bread is made by a machine. They advertise fresh, but it’s not fresh. They don’t even have a kitchen. Here the samoon in the morning will be slightly different than the samoon in the afternoon. That’s how it’s supposed to be. I like that. Some of my bakers have their followers. I want them to have their own touch, their own signature.