Jiovanna Gortarez grew up in Tucson and is a graduate of Pueblo High School. Now a junior at the University of Arizona, she’s majoring in cultural anthropology. She works as an intern for a project looking at the local food economy on Tucson’s S. 12th Ave. called “La Doce” (a project with which the Southwest Folklife Alliance is assisting). We spoke to Jiovanna about the field of anthropology and her experience studying a place she knows well.

How did you become interested in anthropology as a focus of study?
In high school, in my senior AP English class, we did an activity that my teacher labeled “anthropology.” We were reading Their Eyes Were Watching God, which was written by cultural anthropologist Zora Neale Hurston. The activity involved discussing the morality of written scenarios, finding justifications or cultural aspects that could change the way people perceived things. I found myself not only loving the book, but also really loving the field of work. I grew up in Tucson and went to Pueblo High School. One of my high school counselors explained the field more to me. The University of Arizona has a top program in anthropology. So I went for it.

My freshman year at UA I took a course called “Race, Ethnicity, and the American Dream.” It really shaped the direction and my concentration and was honestly one of the best classes I’ve taken. It sparked my interest in racial issues, specifically in Mexican American issues, which is how I identify. I took a course from Dr. Maribel Alvarez last semester, which was on the tools for writing ethnographies. I decided to write about Pueblo High School. I did interviews with principal and teachers and did participant observation. Dr. Alvarez and the class Teaching Assistant Sarah Renkert really loved my work and that helped me get other opportunities like an internship with La Doce project. In La Doce I get to work closely with yet another anthropologist, Dr. Rebecca Crocker.

What did you learn by returning to your high school and observing it from the “outside”?
When I was a student I was surrounded by stigmas and negative energy towards the school, not at the school, but about it. The school is on the south side of Tucson, and the south side itself has this notorious reputation for being crime-filled. It’s a minority-concentrated area. There are old buildings. In high school, I was one of those statistics that said I wouldn’t be able to make it to the university. But that pushed me to work harder. I got a full ride to the UA. That’s when it stuck with me it that it doesn’t really matter where you come from but what you do with what you have. My high school gave me really good skills and personal knowledge, too. I learned a lot about myself.

When I went back and talked to the principal and educators and even the students and noticed the murals on the walls, they all reinforced that idea the students aren’t just what outsiders claim them to be. They’re not gangbangers. The principal said that even though all of these negative associations push against his students, he tries to remind them that “Roses bloom from the concrete,” as the Tupac Shakur said. That resonated with me.

Was it challenging to return to a place you knew so well and see it with fresh eyes?
In a sense, it was very challenging because I had this same idea in my heart. I told myself this in order to graduate and get to college. I had to go in pretending that I wasn’t an alumna so I’d ask more questions that were open and unbiased. But being an insider also helped me because it gave me access to the principal and to the students and I was able to walk the halls in a way an outsider might not have been able. 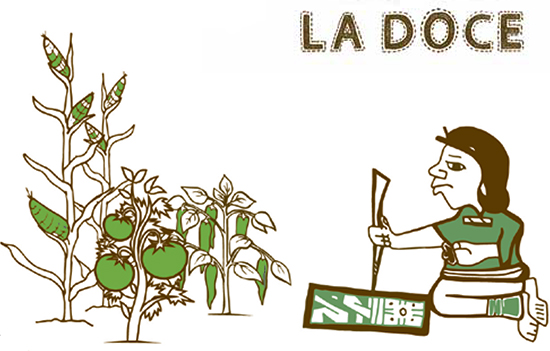 You’re now an intern for the La Doce project. What is your role?
My role in the project is to tally questionnaires from last May. One set is from residents, people living on 12th Avenue and the other set is from people who go and visit 12th Avenue. The questionnaires ask people everything from when you were born to what issues concern you in your neighborhood to questions about food and groceries. The research is looking for indications of how people living on 12th Ave. are getting their food, what kind of food, and what interests they may have in seeing their community thrive. I read through the surveys and tally answers and write it up. I send my findings to Dr. Crocker, since she is the anthropologist on the ground helping the Community Food Bank, the Southwest Folklife Alliance, and Tierra y Libertad, a grassroots organization, gather this information. We discuss my findings and she shares it with her team.

What has been most interesting about that work and those surveys?
The work has helped me confirm that I’m in the right field. It’s been interesting to work in a place I’ve grown up loving and see that it is also loved by others, but also is stigmatized. That’s what I’ve been noticing. In high school, I was always on 12th. We live fairly close and we’re always going to eat at restaurant or raspado place. We even go shop there. Occasionally my dad, a construction worker, will have jobs in that area.

It’s interesting to see both how similarly and how differently people respond. One questions asks people to list dishes they like to eat at home. At once point I had 30 different answers. I wasn’t expecting that much variation. It was a super long list that varied from traditional Mexican dishes like frijoles and arroz to pizza and spaghetti.

One of the most surprising aspects of the resident surveys was that people reported being very satisfied with food at nearby grocery stores. I was expecting list of special chiles or spices that they couldn’t find. But it was completely the opposite. People are getting what they need and are satisfied with the price, and how close they are to grocery store.

What are your general impressions of La Doce based on the surveys you’re reading?
Generally what I’m finding is that the community that lives on La Doce is a very close-knit community. I get a lot of answers like, I like my neighbors, or, It’s easy to make friends. I also read things like, There’s a lot of Mexican culture here. Which is not surprising because we have a large Mexican and Mexican American community in Tucson, especially on 12th. People really talk up the place. They say, I love that I can go down the street and find a panadería and carnicería.

What is the most challenging part of becoming an anthropologist?
I think the most challenging thing is telling people you’re an anthropologist right before you do an interview. That’s because of anthropology’s past. It’s tough for people to open up sometimes. Anthropology hasn’t always been such a nice field. There have been instances of exploitation of cultures and communities. All kinds of accusations have been thrown at anthropologists, from grave robbing to writing about a place in such a way that it seems primitive or strange. Anthropology has evolved and we’re steering away from that but it’s been hard to be associated with that past.

As a budding cultural anthropologist, I find it important to take different steps when conducting any kind of research, whether it be about Mexican American culture or the culture of social media. Asking for permission is number one for me. It isn’t fair to conduct research about a given area or culture without the permission of those being researched or observed. For instance, when conducting interviews I always like to inform my interviewee of the reason behind my questions. I try my best to send my work back to those I interview so they know exactly their role in my research. I steer myself away from anything that could even potentially be perceived as exploitative.

What are your plans for the future?
I’m engaged currently. So hopefully I’ll get married right after graduation. And I want to travel. I like going places I’ve never been before. My fiancé is in the army. So he likes the traveling too. We look forward to doing that together. I would love to work in a non-profit organization with youth and Mexican and Mexican American issues. Right now I work for the Girl Scouts. I love working with youth.