Tens of thousands of migrants, many from Central America, arrived at the U.S.-Mexico border last year seeking asylum. While the law allows them to arrive and seek refuge, the backlog of cases and ever-changing policies have mired their arrivals with injustices. 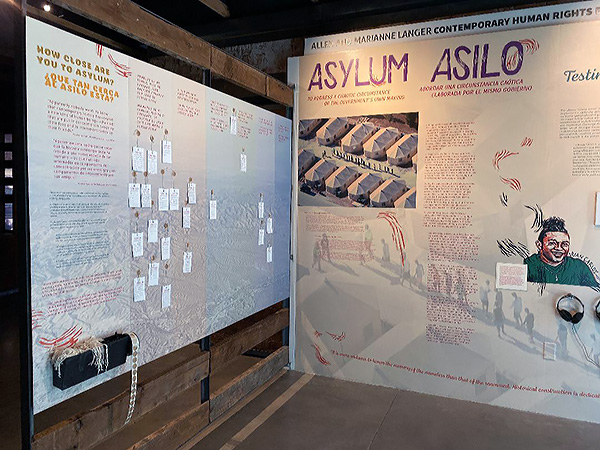 For many Jewish Americans, these injustices have revived a sense of responsibility to bear witness and protest the abuse of immigrants and asylum seekers. The “Never Again Action” invokes Jewish values and texts, along with the language of Holocaust memory.

I am from Honduras and I am in Juarez because I came escaping threats from my country. I don’t know if they are from gangs or from the other political party, we don’t know … We arrived at the city of Juarez on March 28th, after a very long journey, because on the journey the coyote kidnapped us. The coyote who brought us kidnapped us and my family had to pay for our release.

So begins the testimony of Gabriela, who was detained under the international bridge between El Paso and Ciudad Juarez, then separated from her husband and her son and sent with her daughter to Juarez to wait for a court date. Gabriela told her story to Yolanda Chavez Leyva, director of Borderlands Public History Lab at the University of Texas El Paso, who shared Gabriela’s and other testimonies with the museum.

In addition to Gabriela’s story, the exhibit shares the experiences of “Freddy,” a 16 year old from Honduras, who spent over two months at the Tornillo camp; Juan Carlos Flores, a 24-year-old Honduran who spent seven months in detention; Leo Meneses Martínez, a 32-year-old transgender musician who spent six months detained in Corrections Corporation of America’s Eloy Detention Center. Martinez’s story is told, in part, via poems he wrote. Also represented—via a statement from her parents—is the life of Gurupreet Kaur, a six-year-old girl from the northern Indian state of Punjab, who died of heat stroke in a remote desert area west of Lukeville, Arizona, while crossing the border with her mother.

“We centered individual stories as a way to humanize the bureaucratic chaos so many asylum seekers experience,” said Nika Kaiser, the museums curatorial specialist and collections manager.

Connecting past to present, there to here 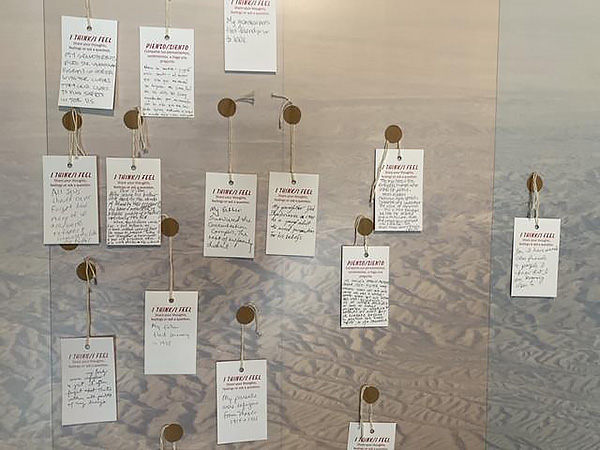 “It’s about situating yourself first,” said Kaiser, who curated the exhibit. It’s also about bringing an issue that might feel far away in time and space closer to home. Which is in line what Holocaust museums traditionally do with Holocaust memory.

Every year the Jewish History Museum presents a contemporary human rights exhibit in its Holocaust History Center, which was built to honor the experiences of the 260 Holocaust survivors in Southern Arizona. These exhibits aim to situate current human rights violations and social injustices within larger conversations about the Holocaust, genocide, and the threats that marginalized communities often face, Kaiser said. Last year, an exhibit featured photographs by Andrew Stanbridge of Rohingya people in Burma and Bangladesh. A prior exhibit addressed present-day persecution of LGBTQ people.

Given Tucson’s proximity to the border, Kaiser said it was “imperative” to create an exhibit that invited visitors to think more deeply about what was happening on the border.

That proximity invites a deeper reflection both for Jewish visitors and the public at large, said museum director Bryan Davis. “It’s the first time we’ve staged something that we’re living inside of.”

Intimacy through stories and portraits

Visitors can listen to stories on headphones, in Spanish or English. “You can only be an individual listening, which is the closest proximity to firsthand we could get, hearing someone’s voice in your headset,” said Kaiser.

Curators also made the choice to not edit the interviews, some of which run nearly 45 minutes long. “In some ways, that’s cumbersome, but it also felt unethical to pull out overly essentialized moments of someone’s chaotic experience. Editing would feel like a kind of censorship,” Kaiser said.

Accompanying the stories are woodcut illustrations created by artist Gaby Hurtado-Ramos, who sees both printmaking and portraiture as powerful ways to connect people, particularly during times of political violence. “The printmaking tradition is about making images that are easily seen, shared and understood. In the end, it’s about people. We respond to faces and portraits more than we do to numbers and dates,” she said.

Working from photographs, Hurtado-Ramos made digital images using a woodcut effect. “That form let me play with surface texture, which can bring to life someone’s picture. I felt like it was a way to get close to these individuals, who I might not ever meet,” she said.

As anonymity is often critical for vulnerable populations, Kaiser said artistic illustrations offered a way to make the narrators visible without direct photographic representation. “There’s a kind expansive expression that happens when you illustrate someone’s identity through illustration. We also wanted an aesthetic to unify them even though their experiences are unique and complex,” Kaiser said.

Not all stories in the exhibit come from asylum seekers. One interview features Joshua Rubin, a Jewish software developer from Brooklyn and life-long activist, who lived for three months in an RV near the Tornillo detention camp as a way to bear witness to what was happening to children in detention. Rubin often held up a sign that said, “Free them.”

Resisting injustices, Davis said, is a central component of Jewish culture. Values such as welcoming the stranger, pursuing justice, and repairing the world—”Tikkun olam”—have always been a core part of Jewish belief systems, but gained particular hold among Jewish Americans after World War II.

Another value, “Pikuach nefesh”—to save a life, has particular resonance with border activism, Davis said. “It really aligns with work of organizations like Humane Borders, No More Deaths/No Más Muertes, and others trying to prevent death and disappearance in the desert,” he said.

Recent activism among Jewish Americans, particularly in response to family separation and the detention of so many children illustrates the embodiment of these values. The famous cry, “Never Again,” felt hollow for a long time, Davis said. “It was said about an event in which there was no intervention. To say it now implies the need for an intervention.”

But the use of this language is not without controversy. “Figuring out how to instrumentalize that language and intervene means you have to see the map of where these things have gone historically and intervene early,” Davis said. “Some people think using that phrase is an abuse of memory: what’s happening on the border is not Auschwitz, so you can’t use that language. But if you wait until things reach that level, the equivalent of 1942, then it’s too late.”

For Davis and Kaiser, illuminating situations around the globe and on the border that are similar—”in striking ways,” said Davis—to the forces that led to the Holocaust, is one way to wake people up to the inherent values of their culture. And, in the case of “Asylum/Asilo,” to horrors happening not far from their home.

“So much of what we learn in Jewish day school and synagogue about Holocaust memory and Jewish values is about this. It’s inculcated into you. But if that conversation happens only in those spaces, then the value is severely diminished. It’s about taking those lessons and using them to prevent people’s suffering,” Davis said.