Gustavo Arellano is the author of Orange County: A Personal Historyand Taco USA: How Mexican Food Conquered America, and a features writer for the Los Angeles Times. Former editor of OC Weekly, an alternative newspaper in Orange County, California, he wrote the nationally syndicated and award-winning column, “¡Ask a Mexican!,” in which he answered any and all questions about America’s “spiciest and largest minority.” A lifelong resident of Orange County, he is the proud son of two Mexican immigrants, one whom came to this country in the trunk of a Chevy.

BorderLore editor Kimi Eisele spoke with Gustavo via phone before his visit to this year’s Tucson Meet Yourself Culture Kitchen, where he will give a talk, “Back to the Futuro: The Unlikely Return of Sonoran Cuisine in Los Angeles.”

Tell us a little about your background. How did you become a foodie and food writer?

If I’m known at all at a national level, it’s because of my food writing. But I’ve always been a reporter first and foremost. I was born in Orange County to immigrant parents. I have a background at the OC Weekly, where I covered all kinds of things, from the Catholic Church sex abuse scandal to hate crimes to the hidden history of music. I also did a weekly food review about restaurants across Orange County. Not just Mexican restaurants, but everything. What I liked about food, besides that it’s delicious, is that as a reporter I could get a whole different view inside Orange County. I could tell different stories about people, based on how they prepared food, what they ate. Now, that’s a trend. That doesn’t make me a foodie, just someone who gets to tell great stories. Now I write exclusively for the LA Times. Although I do have a column for Gravy, a publication of the Southern Foodways Alliance, about Mexican foodways in the South.

What is your main goal as a cultural critic, food writer, columnist?

I’ve always been motivated to tell stories that have been forgotten, ignored or dismissed. The mantra I used to have was to do work that would “comfort the afflicted and afflict the comfortable.” That’s still what I adhere to. There’s a line in Breathless, the film by Jean Luc Godard, a director of French new wave films, where someone asks, “What is your dream?” And the response is “to become immortal and then die.” As a reporter, that kind of makes sense. I really don’t care about people knowing who I am, but I care about the stories I write, the hidden histories of Mexican food of Southern California. I’m also a professor of journalism at a community college. I always tell my students, “Almost no one’s going to read you.” What are we, seven billion people on earth? Maybe 1,000 will read you. So, all you can do is write stories that will be remembered by certain communities. That gives you this extraordinary freedom to write just for yourself and write the stories that matter to you.

What is the power of the taco?

No one’s ever asked me that. I have to think a minute. It entrances people in a way that few other things Mexican do. The taco and Día de los Muertos. People are drawn to them like moths to a light. Sure, there are all these questions about appropriation and authenticity. For those of us who are Mexican and want to be woke, we have to accept it for what it is. The borderlands is a place of so many contentious relationships, but here’s this bridge that can bring us together. How do we as Mexicans use that bridge and do something positive with it?

The taco has become a canvas for all kinds of people to do something positive in their communities. That’s a profound leveling in the history of Mexicans in the United States. I mean, there are Muslim tacos, Korean tacos, all kinds of tacos. People see the taco as something they can use to express their own culture. To me, that’s not appropriation, that’s the Reconquista. I’m a heretic in the taco world. You’re not supposed to say that. White people are appropriators. White people can’t wear turquoise. I get it but, let’s look at where that gets us. Mexican and Mexican American culture is ascendant. Against the fears, we’re not eradicating white culture, we’re embracing our own culture and adding to it.

Is eating food from cultures other than one’s own the first step of revolution?

One of the points I make in my lectures is that Americans hate Mexicans but they love Mexican food. And it’s true. But what people don’t realize is one of the first ways to denigrate the “Other” is to categorize their food as inedible, as not human. You see this in the language of ethnic slurs. The slurs are based on food. Mexicans are called “beaners,” British “limeys,” French “frog eaters,” Chinese “dog eaters.” You have the stereotype of African Americans eating chitlins and watermelons. The idea is minorities are eating food not worthy of human consumption, hence they themselves are not human. Then you have Kosher and Halal, which are not mainstream, therefore goes the logic, Jews and Muslims are not mainstream.

It seems superficial and trite, but food and food festivals create a place where everyone can enjoy themselves. It’s an important start and one people don’t give enough credit to.

You’ve raved about Tucson’s Poblano hot sauce? Anything else you love about la comida Mexicana here?

Sonoran cuisine is magnificent. You have the tortillas de agua, las sobaqueras. My favorite soup is caldo de queso. Oh my God, it’s amazing. And of course, the mother chile, the chiltepín. I actually grow them here in Southern California. I wrote about that recently in a newsletter. My plant grew humongous then it died. Two years later there are a dozen plants in the garden. The birds did the work of passing the seeds around the yard. My wife makes salsas out of them. Then of course, you have the Sonoran asaderos, grilled meat. You have Tacos Apson. Sonoran hotdogs. Chimichangas. It’s just magnificent cuisine, and one that doesn’t get enough love.

You’ve talked before about the “hyper-regionalism” that keeps Sonoran cuisine something of a secret, or prevents it from breaking into the mainstream? Is that changing?

It’s about to change. We are in the very beginnings of it here in Southern California. In the last five years, we’ve seen an explosion and so much interest. We can start with the Sonoran Dog. We don’t know it as the Sonoran dog. We call it the bacon-wrapped hotdog. The phenomena came to California ten to fifteen years ago from Tijuana via Tucson via Sonora. Now it’s a fixture at sporting events and stadiums. You’ll see the waves of hotdogueros coming to sell the bacon-wrapped hotdogs. Most people don’t know that it came from Sonora.

But maybe the first explicitly Sonoran trend has been the flour tortilla. You can find it at places like Sonoratown and La Monarca. They openly brag, “We get our flour from Sonora and make our tortillas Sonora style.” It’s become a foodie trend.

I still haven’t seen much of the chiltepín here. That’s probably because it’s so expensive. But it’ll get there. All Sonoran food really needs is ambassadors.

Your talk at TMY is called “Back to the Futuro: The Unlikely Comeback of Sonoran Cuisine in Los Angeles.” Want to give us a sneak preview?

What I mean by that is that we don’t really get Sonoran immigrants to Southern California. They go to Arizona. This is a sad irony, because the people who founded LA were from Sonora. Sonoratown, the restaurant, is named after first barrio in LA, which was called Sonoratown. I’ll talk about this, and the history of food trends and foodways, highlighting some of the people involved in bringing the cuisine to the city. I’ll probably also tell people that if they want to make some money, they should go to LA and open a Sonoran asadero. I guarantee you’ll do well. People will come. 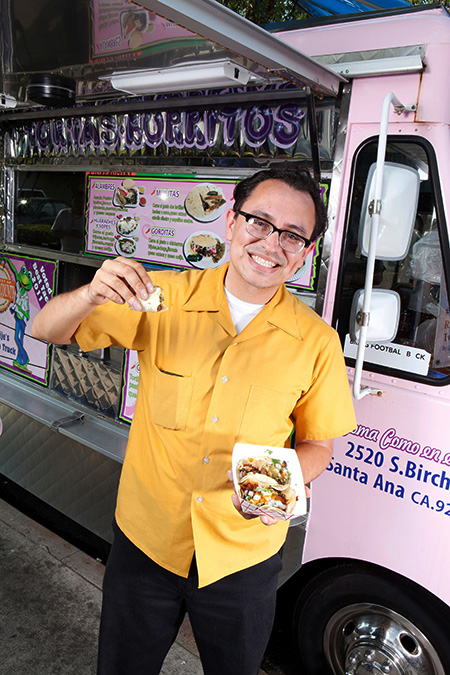