Chances are, if you’ve ever set foot on public lands in the United States (or even into a gift shop near a national forest or wilderness area) you’ve seen Smokey Bear–a big, friendly brown bear with a shovel in hand. He appears on road signs, bumper stickers, and posters. Sometimes as a statue or in person. And even in a famous song, “Smokey the Bear” (which added “the,” for cadence). 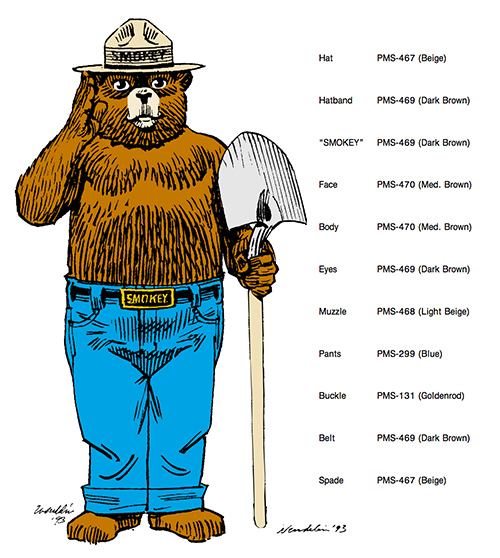 If you know Smokey, you know his message, too: “Only YOU Can Prevent Forest Fires.”

The longest-running advertisement in U.S. history, Smokey has endured since 1944, when illustrator Albert Staehle drew the first image of the bear to initiate a fire prevention campaign for the U.S. Forest Service and the Wartime Advertising Council (now the Ad Council). Smokey’s message worked to build awareness of fire prevention and the role of everyday citizens like you and me in keeping forests and other wild areas safe.

“Smokey inhabits our mental architecture,” says Jesse Minor, a geographer at the University of Maine at Farmington who has researched the icon as a political symbol.

Minor attributes Smokey’s success to a number of factors. First, bears are recognizable animals. “Black bears have a wide distribution throughout the country. You find them in almost every ecosystem,” Minor says.

Also, since they can stand on two legs they’re also easy to anthropomorphize.

Add a hat, blue jeans, and a potbelly and you have a veritable father figure. One that could even receive letters and postcards, which Smokey did, by the hundreds of thousands. In fact, by 1965, Smokey was getting so much mail, the U.S. Postal Service gave him his own zip code.

Smokey’s image is highly protected. In 1952, rights to Smokey Bear were removed from the public domain and assigned to the US Secretary of Agriculture. In 1974, the Smokey Bear Act amended that law to allow commercial licensing, royalties, and fees. But Smokey can only be used for fire prevention messaging.

Even Smokey costumes have to abide by certain rules: They can only be made by approved manufacturers; they can only appear fully, not as partial costumes; and anyone donning a Smokey costume is prohibited from speaking.

But these protections haven’t kept Smokey from being co-opted. Cannabis proponents, for example, have long appropriated him to spread their message. (e.g., “Only You Can Prevent Stems and Seeds” and “Tokey the Bear.”)

In the mid-20th century, nearly a decade after Smokey was created, the U.S. Forest Service invented an official history for Smokey, assigning his identity to a real bear that survived a fire in New Mexico. That bear was then sent to the Washington Zoo in Washington, D.C., where the public could view him.

But apparently the live bear “was never as good of a mascot as they wanted,” Minor says. For one thing, he wouldn’t mate, so they had to bring in an adopted “son.”

“When he died, they decided they were done with bears. A cartoon is so much easier,” Minor says.

Minor began reflecting on this while looking at a chronological series of Smokey Bear posters on the third-floor of the UA Laboratory of Tree Ring Research. He noticed that early images of Smokey were often conflated with American nationalism. “The message was that fire was also an enemy and that it was up to you and me to keep America safe,” he said.

It made sense. Before Smokey, fire prevention posters had featured caricatures of Adolf Hitler and Japanese Prime Minister Hideki Tojo, with messages such as “Forest Fires Aid the Enemy” and “Our Carelessness, Their Secret Weapon.” This was, in part, a response to fires started after a Japanese submarine attack on an oil field near Los Padres National Forest and another in Oregon, which resulted in a small forest fire.

“There was a prevalent fear about arson and sabotage by Americans of Japanese descent and also immigrants from Japan, which as far as I can tell was unrealistic but was nevertheless tied in with justifications for internment and other human rights abuses,” Minor says.

In 1942, the Forest Service used Bambi, the young deer and her animal friends from the Walt Disney film of the same name to spread fire prevention messages. But as these figures were only a temporary loan from Disney, the Forest Service created a new icon.

During the war, Smokey joined other messages from the Wartime Advertising Council calling for citizens to plant Victory Gardens and ration sugar, meat, cooking oil, and canned goods for the war effort.

“He becomes a literal avatar of the government,” Minor says, an idea he elaborates on in “Smokey Bear and the pyropolitics of United States forest governance” (Political Geography, 2017), co-authored with Geoffrey Boyce.

At one point, Smokey was pictured with the Founding Fathers, a new “Great American,” despite the fact that he wasn’t invented until nearly 200 years after the framing of the U.S. Constitution, Minor says. Later, he became part of Cold War symbolism, where his fire prevention message is deliberately linked to the Cold War, including a poster with a red telephone meant to evoke the hotline between the White House and the Kremlin.

During the 1970s, Smokey’s image softens to reflect a more multicultural sensibility. With the Earth movement of that decade, Smokey appears as a paternal figure, a tree hugger, with the rest of the animal kingdom huddled around him amidst flowers and butterflies.

Minor thinks current images of Smokey tell a new story. “To me, he looks tired, hollow-eyed, sorrowful, which perhaps reflects cultural, political, and economic changes in the landscape.”

And as the American West continues to burn, it’s no wonder.

But while Smokey’s message has been consistent, some fire ecologists wonder if it’s been the right one.

“This idea that the only good fire is a dead fire—we know that’s not true,” says Thomas Swetnam, a dendrochronologist and professor emeritus from the University of Arizona. “We can’t just put all fires out because then we’ll have more fire.”

Some Smokey Bear posters show two young cubs hanging out with Smokey, which have inspired Swetnam to imagine a future campaign. “Smokey Bear would get killed in a forest fire, and the two cubs would survive. One comes out and picks up a shovel and he becomes Smokey Jr., but the other comes out and picks up a drip torch.” (A drip torch is a tool by firefighters in prescribed burns. It’s used to intentionally ignite fires.)

“We could call this new guy Sparkey. He could promote good fire. So, we end up with the necessary duality of both putting out bad fires and using good fires,” Swetnam says. “Unfortunately, I don’t think the Ad Council would go for it though.”