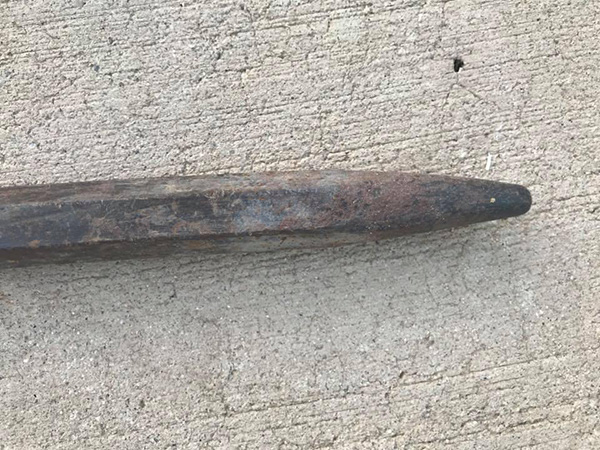 Anyone who has ever tried to plant anything in the desert probably knows that heavy clunk when the momentum of a shovel stops, the clink of metal against hard rock. That moment of reckoning when you know the winter garden or the future shade tree isn’t going to come easy.

This sedimentary rock of calcium carbonate binds gravel, clay, sand, and other materials, creating what can feel like an impenetrable underground shelf, preventing roots or anything else from passing. It’s found in dry regions of the North American West and South America.

The word caliche comes from the Latin “calx,” for lime. Caliche can also be called “hardpan,” or “calcrete,” and many other names not suitable for print.

For those willing to keep going, there’s a special tool to help you get through it: a caliche bar. It might be called simply a digging bar or a slate, shale, or pinch point bar. In Texas, a similar bar with a wedge at one end is called a San Angelo bar. But in the Southwest, it’s a caliche bar.

This long, straight metal bar with a point at one end is used to break up the caliche. If you’ve got the stamina.

Here are some of your memories and stories about caliche and caliche bars:

Caliche is the hard part of earth’s heart.
–Eduardo Guerrero

In what seems like another lifetime I worked in a blacksmith shop. I used to make caliche bars out of surplus drill rod that came from the copper mines around Tucson. I also did a good bit of sharpening them for folks.
–John Sartin

A caliche bar is the ideal tool, but a shovel must also be used to remove the chunks of caliche, rocks, and soil that it dislodges. So the chore becomes much better with two people. One can chip away with the bar then rest when the shoveler scoops. With two it takes less than half the time. I dig holes in caliche to plant trees, and then only native trees because I know their roots will go farther and not be trapped forever in the virtual ceramic pot the hole would become for most other plants.
–Kevin Dahl

In 2006, a group of grassroots organizers turned their attention to a Southside neighborhood and decided that digging was the only way to salvation. The group not familiar with the backyard terrain of the beautiful Southside took it upon themselves to build something beautiful out of something abandoned. At first the driving force behind the decision to dig by hand was lack of funds, but later digging became a sign of pride and respect. The ground seemed innocent enough.

At first sight, you’d think only shovels and picks would needed to dig garden beds and plant trees, but the truth lay 8 inches below the surface. The scientists call it calcium carbonate, but Raza know better. We call it caliche. It runs in bands in the Southside. It is said that we were placed on top of it intentionally after land was lost and boundaries redrawn. (The best land is at the foot of the mountains and at the edge of the river, two places that are beyond the reach of bare brown hands. But that story is for another day). Caliche was used by indigenous desert dwellers to build bricks, irrigation canals, and walkways. How resourceful the people of the desert can be. But for Raza, caliche is the subterranean stone wall that keeps us from fertile ground. Oh, how things seem to always be just out of our reach. But worry not. Topos (moles) are made to dig, and dig is exactly what we did. We began simply by bending shovels and breaking picks. Things then progressed to augers and caliche bars. All of this made for sore hands and achy backs, but we persisted. We dug and dug. We conversed and laughed. We weathered the different elements and gave thanks to the rain for loosening up the caliche. We then screened and separated the caliche rock, repurposing it for walkways and berms. The barrier was transformed into a resource. We came to expect its pushback and eventually, its cooperation. See, caliche isn’t too different from us. We too give a little pushback. But for those who stick it out with us, we eventually come around and enjoy the mutual cooperation.

So let it be known that digging in caliche is not for the faint of heart or the weak of hand. It is a right of passage. For those who learn to connect with this ancestral material, the ground will open up and the literal fruit and vegetable of your labor will be your prize. If you have the will to keep digging, that is.
-Luis Perales

A few years ago our dog died. We wanted to bury him in the garden in the backyard. We read up on the depth the grave would need to be for him to decompose and not be unearthed or attract critters. My husband started digging and at about four feet hit caliche. He tried and tried to break through and couldn’t. So he filled the hole back and said, “Well, that was the greatest exercise in futility ever.” We had the dog cremated and put the ashes in a planter instead.
-Kate Ramlow Meyer

Spent six months soaking and pecking at spot in my front yard years ago. Three-foot thick caliche. Finally got though and planted a pecan tree, which didn’t make it anyway. Thought I should make my million by selling “Caliche Fitness Club t-shirts.”
-Eb Eberlein

Six inches down, solid! No garden, no landscaping, end of story!
-Mike Olson

Got an artifact you think is significant to the region’s culture and heritage? Tell us about it: borderlore@southwestfolklife.org